Blog - Latest News
You are here: Home1 / Article Archive2 / I was there3 / Westward Ho 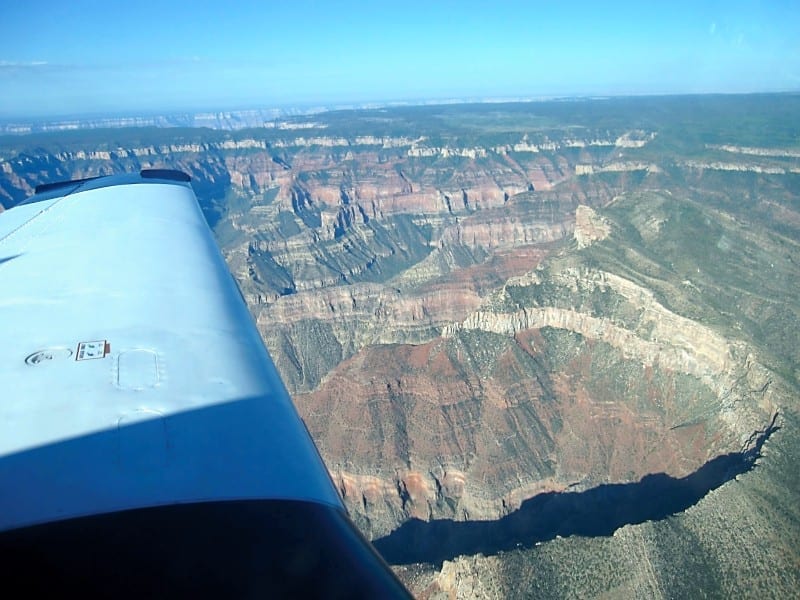 The Grand Canyon offers a view unlike any other from the air.

I’ve made a few trips to the west coast from my small eastern home town. The first was by car when I was nine years old. We visited many, but not all, of the 48 (at that time) states.  In those days, 1939, there were few roads that allowed rapid travel, say 60 miles per hour. Accommodations sometimes included a privy out behind the lodging house. For days on end there was little to see, but arriving in Yellowstone Park there was much to see. Visits to Yosemite, San Francisco, Catalina Island, and the Grand Canyon were also memorable parts of that trip.

The second trip was in my old Piper Arrow in order to attend the graduation of my oldest daughter from a college in Oregon.

A trip two years ago with my wife aboard is what I’m going to write about now. The plan was to fly to the Napa Valley and in doing so to experience the scenery of the Rocky Mountains up close, to explore the Grand Canyon from a low altitude, and to overfly coastal California en-route.

The return trip would take in Yellowstone Park. I had laid out the route to be followed with stops every three hours for gas, and I prepared for high altitudes by filling the oxygen tank in the Mooney to capacity, and preparing nasal cannulas (allowed up to 18,000 feet). For safety I bought an oximeter. They are relatively inexpensive and their use provides an interesting test for determining one’s ability to maintain healthy oxygen levels in the higher altitudes. This trip was before the iPad with its numerous apps so there were plenty of paper charts on board, including the special chart that is needed in order to safely and effectively avigate the Grand Canyon. There was still plenty of room for the wine I planned to bring back home, however.

The main reason that I mentioned the auto trip when I was nine years old was to contrast the boredom of stops for gas in those days with the sense of anticipation when flying into a new airport, talking aviation, and meeting people whose lives and ways are much different that the denizens of the east coast. I thought of myself somewhat fancifully as an airborne gypsy. Since my wife was raised in Canada, this was her first real experience with the heartland of America. She was unfamiliar with much of the west coast as well and this would be her first trip to the Napa Valley.

The highlight of the flight west was our visit to the Grand Canyon. But a large T-storm was in progress over Flagstaff, our destination that day. This necessitated a stop at a small airport in Winslow, Arizona. The airport KINW is named after Charles Lindbergh. The town is more famous for another reason. The Eagles composed a song about it:  “Take it Easy,” and the lyrics go “Well, I’m standin’ on a corner in Winslow, Arizona.”

La Posada proved to be a great stop.

As it turned out there’s a great place to stay in Winslow. It’s called La Posada. Originally, a hotel built for passengers on the Santa Fe railroad by Fred Harvey it brought “civilization” to that part of the west. It opened after the stock market crash, but later years were not kind, and it fell into disrepair until it was rescued and restored to its former glory by the present partners and owners.  The furnishings are museum-quality Spanish. The rooms are named after the notables who stayed there. The restaurant is presided over by a chef who was nominated for the James Beard award. The food was great and was quite reasonable.

The next day we left for Flagstaff where we toured the Lowell Observatory and visited the Museum of Northern Arizona in preparation for our flight over the Grand Canyon. The Grand Canyon experience requires preparation on several levels. In order to appreciate the forces leading to its creation 17 million years ago you will want to do some reading. The museum display was helpful in this regard, but I also recommend Wikipedia for this and in addition you might want to obtain a DVD entitled “Grand Canyon, a Symphony of Stone.”

Avigation of the Grand Canyon requires that you have the VFR Aeronautical Chart and study the flight restrictions carefully to avoid mishaps. One side of this chart has the routes to be used by commercial operators. The other side depicts the flight free zones (no flights below certain altitudes) as well as the corridors between these zones that can be used to get you down low and close to the natural wonders.

You will find latitude-longitude coordinates on this chart  that you can use as fixes for turning points as you transverse the corridors. Frequencies to monitor within these corridors are also displayed as are minimum altitudes. We spent some time programming our Garmin and were able to maximize the time available for sight-seeing with a route that took us from Zuni Alpha through the Zuni Point corridor over the junction of the Little Colorado River with the Colorado River and then through the Dragon Corridor and Canyon Corridor, and Tuckup Corridor.

Between the southern points of entrance to Tuckup and Canyon Corridors there is something else worth seeing: the Indian village of Supai and the famous falls of Havasu Canyon, the tallest of which is Mooney Falls (not named after Al) and, two miles more upstream, Havasu Falls, known for its striking blue-green color.

We did this trip early in the morning before the commercial operations started up. This turned out to be a good plan for we saw no other aeronautical traffic.  An additional worry that I had in mind was the possibility of a bird-strike. California Condors breed in the environs of the Grand Canyon. We saw no birds and no airplanes.

Continuing westward we reached the coast and were passed through some busy airspace by accommodating controllers, allowing us to appreciate the sights of coastal California. However as we proceeded northward we encountered a coastal stratus layer. Needing to refuel, we were vectored for the Instrument approach to RWY 25 at Santa Barbara. This approach takes you close to the rugged shoreline and it’s not good to get down low early. Reading Bob Brewer’s experience on Air Facts (about the approach to Santa Barbara’s RWY 7) brought our experience back to mind.

Yellowstone is worth the stop.

That evening we arrived at KSTS, the Sonoma County airport. A rental car was available and we settled in for a few days of exploration and education (about wine) and indulged in some of the fine dining for which the establishments in the Napa and Sonoma valleys are famous. When we departed the baggage compartment held several of the wines that were obtainable only at the winery.

Leaving the wine country, we climbed through a low cloud layer and broke out on top in glorious sunshine. The destination was West Yellowstone Airport, but the routing was complicated by the presence of much military use airspace to the east. A helpful controller was able to cut a hundred miles off of the flight plan we had been given on departure. A stop at the airport in Burley, Idaho, put us in position for a final leg to West Yellowstone Airport, and the timing was perfect for avoiding a t-storm near the route. This airport is situated very close to the western entrance to the national park.

As with the Grand Canyon, a little reading about the background is worth doing, and you may want to enjoy watching some of the DVDs that are available about the park. There is a particularly good one that was produced by the BBC that covers animal life in the wintertime in the park. I expected to see bears, bison, and elk and was not disappointed, but seeing a pelican was a surprise. I revisited some of the geothermal features I had encountered in Iceland and could recall from my auto trip to the park when I was nine years old.

When we left the park we donned nasal cannulas and ascended into the high teens to travel out of the mountainous terrain. We refueled in Cheyenne and landed in Des Moines for the night.

The last leg home to HPN included a visit to Sporty’s at I69.

Washington report: the future of 100LL
Scroll to top