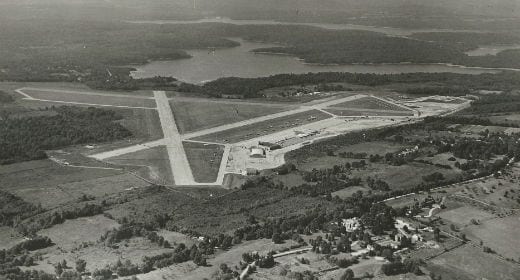 HPN was once a quiet airport surrounded by farms, as this 1947 photo shows.

Airports are homes for planes. But of course they can be quite a bit more. My plane is based at Westchester County Airport (aka White Plains Airport). My association with KHPN goes back many years. The airport was built in 1942 as a base for the Air National Guard. The Guard was much later moved across the Hudson River to Stewart Field. Actually KHPN was built at a site that allowed for future development as its predecessor, Armonk Airport, was a small strip surrounded by a cornfield and an apple orchard. Barnstormers offered rides to the public back in the 1930s and that is where I had my first ride in an airplane.

I was fortunate to gain access to a treasure trove of memorabilia, photos of the early days of HPN though the auspices of Stephen Ferguson, the assistant manager of the field. He inherited this from a predecessor, Gene Graziano. Steve, a pilot himself, introduced me to his view of the field, allowing me to experience a unique view – up close and in the center of the action, a view that competes with the tower’s, but may well surpass it. In position near the instruments that provide the information for the ATIS and the antenna for the glideslope, one has a view of RWY 34 arrivals and departures. Talk about a bird’s eye view. More about that later.

This quonset hut was the main terminal for years, before it was replaced by decidedly classier buildings.

If you wanted to learn how to fly in the late 1940s, you could do so for “free.” I came across an ad for an Aeronca four-passenger sedan selling for $4795 including the cost of flight instruction.

At HPN in 1948, you could learn how to fly at Westair. That’s where I learned to fly. I don’t remember how much it cost me, but it wasn’t a problem as I was making decent money after having spent much time and earning a little money in training to be a neuroradiologist. Flying was an outlet for me. It became a passion. The long trips that I made over the years all began from HPN. Westair later became part of the Million Air network. Now Performance Flight operating out of the Million Air hangar provides flight instruction. And Panorama, another FBO on the field since 1958, offered flight instruction, but it too morphed into Landmark West, and Landmark West divested itself of the flight instruction – which is now offered by The Academy of Aviation. Rotorcraft instruction is currently offered by Wings Air based at Signature.

I got my instrument rating after having been checked out by Darrell Weaver at Westair, but the written was accomplished after taking a three-day course offered by Sporty’s Hal Shevers. As I recall the written was given at BDL.

The airport dedication involved cutting the ribbon with (what else?) a propeller.

HPN became a very busy airport when it added airline flights, and corporate aviation departments established on the field added to the mix.

The first airline to fly out of HPN was American Airlines. They offered weekday service on a flight originating at LGA, landing at HPN, and flying out to SYR. Then Mohawk replaced American with successor Allegheny serving the airport until 1979. Now the airport is served by six major airlines with numerous daily flights, although the number of flights is still below the days before the recession.

Customs service at HPN has been around for a while. This has contributed to the growth of corporate aviation service at HPN. Several companies doing international business have an aviation department at HPN and charter flights are operated by several of the FBOs. NetJets is well established at HPN.

The Civil Air Patrol has a wing at HPN and there is a flying club, The Westchester Flying Club, which has been on the field since the 1960s.

HPN has been a contributor to the economy of the region. There are 1300 jobs on site. Over 80 businesses operate out of the airport, and efforts to be a good neighbor environmentally have for the most part succeeded. Noise abatement awards were presented last year to 50 companies. Voluntary curfews on night flights help to keep good relations with the neighbors.

The old tower at HPN was supplanted in 1968 by a new taller tower on the other side of the field. The old tower was supposed to house a museum, but this never materialized. The new FAA control tower is open from 0600 t0 2300.

The new tower has a much better view of the field, but the proximity of the reservoir to the north of the field and the tendency for fog to form over a good portion of the field limits the tower’s view occasionally. A report of an accident on 6/13/14 recently published spells this out.

When asked whether the flight in question had departed, the tower controller responded, “I have no idea. We have zero visibility.” Weather conditions about the time of the accident included a 200-foot overcast ceiling with about 1/4-mile visibility.

In the course of 48 years of active flying, I’ve made a few approaches when the weather was at minima. Some of these were in my first plane, a 180 hp Piper Arrow, but now flying my Mooney with a Garmin 530W and an autopilot there is less pucker factor. My only missed approach was at HPN on a very foggy day. I had to divert to POU and in the taxi going back to HPN I saw that the visibility at ground level was practically nil.

On a nice day the “sweet spot” on the airport is, as mentioned earlier, close to the PAPI and the instruments that provide the data for the ATIS. It is here, with RWY 34 active, that one can critique the takeoffs and landings, and estimate the amount of rubber left on the runway by heavy aircraft as well as assessing the potential for wake turbulence.

On a day when the wind shifts to the south, the “sweet spot” shifts to the other end of the field, a grassy area about 100 feet from the usual aiming point. These are places to delight an aviation aficianado. I’ve made a couple of trips with Steve Ferguson to these “sweet spots” as Steve made the rounds in his yellow airport vehicle. I learned a good bit about the airport from talking to Steve. As a resident pilot, most of my interaction was with ATC, but the job of running the airport itself was terra incognita.