My very first ride on a jet airplane was on my trip to Kansas City, Missouri, for a job interview with TWA in 1963. There was a pass waiting for me at the Chicago TWA ticket counter, and the plane was a Convair 880. They put me in first class—I didn’t know there was any other, at the time. The hostess’s name was Mary. (TWA never used the term “stewardess;” we didn’t even use “flight attendant” until we started hiring males in the late ‘60s.) When Mary asked if I cared for a snack, all I could think of was my dad warning me never to eat anything on a train as it would be ridiculously expensive. I figured a plane would be even worse, so I politely declined.

When Mary finished her first class service, she again asked me if I was sure I would not like a snack. “It’s free,” she said. Oh, well, I allowed that perhaps I would. It was delicious and could have qualified as a lunch, the way airline food used to be. 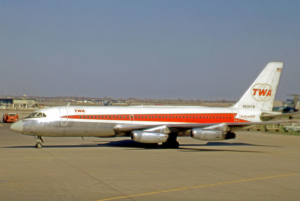 The Convair 880 was the fastest of the first-generation jet airliners.

I thought the ride was great. But never, in my wildest dreams could I have imagined, that I would be flying one of these in a matter of months!

My first job with TWA was as a Chicago-based “jet second officer.” The second officer position was created because the Airline Pilots Assn. (ALPA), the TWA pilot’s union, demanded that the new jets be staffed with three pilots. Most of the senior jet flight engineers (basically mechanics) who had progressed to the Lockheed Constellation flight engineer position were not pilot-qualified. Therefore, guys like me were given the F/O ground school and copilot check-out, which suddenly made us “the third pilot!”

We rode in the jump seat behind the captain, mostly being ignored. The bright side of this was that I got to learn the operation and our company fairly well—without being under the pressure that I would have been as a “real” 880 copilot. Fortunately, at the rate TWA was expanding I was only a second officer for about eight months. I then went to Connie F/O training and flew it for a little less than a year before I was back in training as a CV-880 F/O. My first years with TWA were a rocket ride!

The 880 was on the cutting edge of technology for the time. It was the first to use chemical bonding of metals as opposed to mechanical fasteners. See the two production films, one from 1958, the other 1959, for an in-depth explanation.

About everyone who flew the 880 fell in love with it because it was such a dream to hand fly. It did have a good autopilot and dual flight directors, and I think it was our first aircraft to receive approval for CAT II approaches. In my opinion it was the prettiest of the four engine jets.

The 880 was not without a few shortcomings. It used very high airspeeds on takeoff and landing as it had no wing leading edge high lift devices. It was a handful after losing an outboard engine at V1, and there was more than one training flight that ended up “in the mud.”

Most flight training and checking back then was done in the airplane until the advent of the wide body jets and the later generation of more sophisticated simulators with realistic visual and motion.

We did most of our flight training at Kansas City’s MCI, where our overhaul base was located. Airline operations were still at MKC, which today is Kansas City Wheeler Downtown Airport, a bizjet beehive almost within walking distance of downtown KC. All airline operations are now flown out of Mid-Continent International. (MCI).

The 880 did not have windshield wipers; it had what Convair called “rain clear,” which was hot engine compressor bleed air blasting them. It worked well but was terribly noisy and when you closed the throttles on landing it kind of pooped out when the engines spun down. In a heavy rain you had to get into reverse quickly to spin them up and get more air.

The 880 was the only plane I ever flew that had nose wheel brakes. Several conditions had to be met for them to operate: the nose strut had to be compressed, the wheels centered, and both brake pedals had to be depressed together. There were weight reduction penalties if it was inoperative. You could also drop the main gear only to use as speed brakes in an emergency descent. This could be done up to 375 kts or Mach .88.

The wing anti-icing was a hot leading edge heated with engine compressor bleed air and worked wonderfully. If I remember correctly, the tail leading edges were heated electrically. 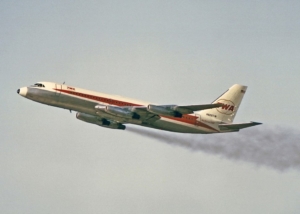 Like most “straight pipe” jets, the 880 did leave a trail of smoke.

Like most swept wing airplanes, it tended to get into Dutch roll so the yaw damper (the rudder channel of the autopilot) was always engaged just after takeoff and disengaged on touchdown.

It was smoky and noisy but so were the first 707s and DC-8s with their non-fan “straight pipe” engines. The later high bypass ratio engines were more powerful, much quieter, and didn’t smoke so much on takeoff. In the early days some of us called her “ole smoky” and to fly it was to be “On Top of Old Smoky,” which was a popular song around that time. And sometimes we called it a Corvair, or when talking to a 7 oh 7 pilot, one might say, “Oh, I’m flying the 8 oh 8!

The 880 was the fastest of the first-generation jet airliners. We could cruise it at Mach .85 and the Mmo was .88. Some thought that is where Convair came up with the number 880. Others thought it was because the passenger cabin had 88 seats and 88 windows. Your guess is as good as mine…

But the greatest thing that ever happened to me on the 880 was on a night flight from ORD to SFO, when the prettiest little hostess I’d ever seen came into the cockpit with coffees. Our layover was in San Francisco. Sharon and I had never heard of Don Ho, so I asked her to go and see what he was all about. We saw him in a lounge show. We loved him, but not as much as each other. We’ve now been married for 55 years and had three boys. Two became pro pilots and one is our Fire/Rescue Department Chief. To make up for a boy-only family, we now have six granddaughters.

Sharon is the only thing I ever stole from TWA.