Blog - Latest News
You are here: Home1 / Article Archive2 / I was there3 / Memories of flying the whale—Boeing 747

When US airlines began flying jet airliners around 1960, they were greeted with mixed emotions. The British Comet was the first and grabbed headlines in the 1950s as it suffered a series of tragic, catastrophic in-flight breakups that caused considerable suspicion and reluctance about the public’s acceptance of “jetliners.” But the American jetliners did come of age in the ’60s and quickly took over.

When the next big innovation, the so-called “jumbo jets,” came on the scene in 1970, there was an eager, worldwide explosion of enthusiasm. Although I was too junior to even sneak a feel of a Boeing 747 yoke, I dreamed of the day I would take command of one. I had to wait 20 years. 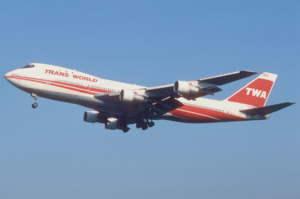 The “seven four” was a new class of jet.

Pan Am flew its first 747 flight from New York to London in January 1970 and TWA first flew it on our “trans-con” (Los Angeles to New York) in February of the same year. TWA featured and promoted the heck out of the 747 until the L-1011 came along. Then we promoted the “wide-bodies,” which soon took charge of all our long-range and international flights.

Checking out on the seven four was not a radical transition as I had already been flying a wide-body (the L-1011) for four or five years. Nothing could take the place of flying the 1011 but the pay difference and better flight pairings compelled me to do so when senior enough.

In some ways it was a step backwards, as our seven fours were among the very first off the production line and their avionics and automatic flight systems were already antiquated. (Some of my other airline buddies called our dash 100s the “rope start seven four.”) It was Cat II capable, but Cat III was way out of its league.

And the cockpit: wouldn’t one expect big plane = big cockpit? Sorry, it was about the same as the 707, only longer to accommodate a crew rest bunk.

The more senior types had told me over the years that flying the seven four was just like flying a great big 707 and it was true. So, what’s it like to fly a great big 707? There are some interesting differences and they mostly had to do with the geometry of the airplane and its relation to Mother Earth. When we land a Piper Cub, we are only inches above and forward of the main landing gear. In a 747, the pilot is about 30 feet above the ground (the height of a three-story building) and over 20 feet forward of the nose landing gear. In a 90-degree turn, the cockpit will be nearly twenty feet beyond the pavement—out over the grass. We were not allowed to attempt more than a 90-degree turn on intersecting taxiways and runways. The diagram below shows what was needed for a 180. 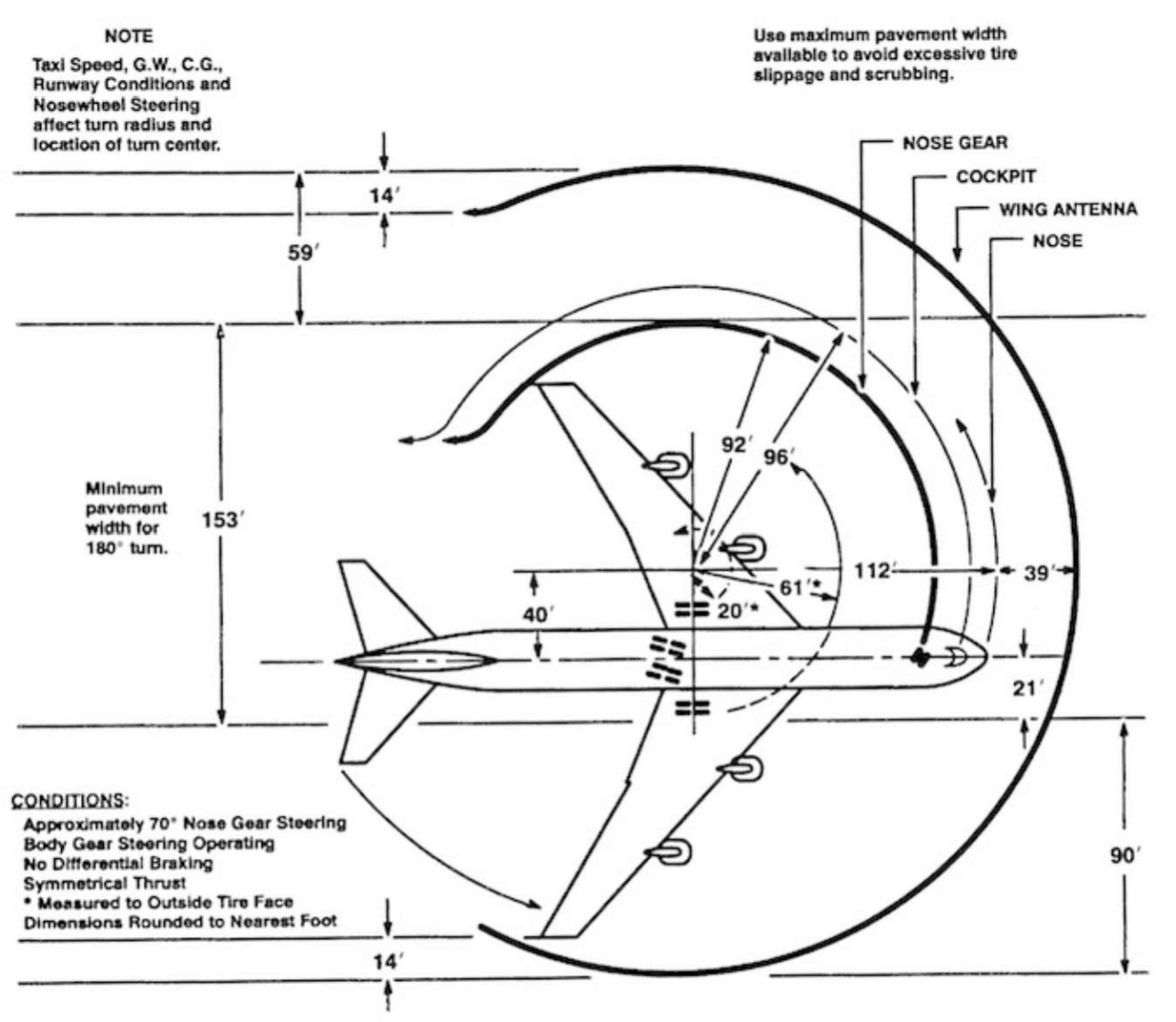 One also had to make certain that the aircraft did not attempt taxiing on any airport surface not stressed for wide-body aircraft. There were taxiways, some runways, and ramp areas not stressed for it. Not a big problem at places like ORD and JFK, but one had to use caution at secondary airports and many of our alternate airports. The tower would know but sometimes you had to check to make sure.

The landing touchdown target for wide-bodies flying a 3-degree glideslope is the 1,500-foot mark (second three stripes on either side of the runway centerline). Now, when we land our light planes on the 500-foot mark, we expect that most of the airplane is at that point—not so with a wide-body. If the pilot used the 1000-foot mark in the 747, the main gear would clear the runway threshold by only 4 feet! Using the 1500-foot mark, the main gear would clear the threshold by 72 feet and if one used the 500-foot aiming point it would be a case of first-class cabin arriving well before economy class.

It was surprisingly easy to make consistently good landings. The pilot not flying would call out 50 feet on the radio altimeter, at which point the flare was initiated, then 40, 30, 20 and 10. The airplane was so heavy that it did not bounce easily, and the main landing gear was so beefy it could usually absorb a hard landing without a crunch. We used to say it had a “screw-up factor” of about ten; of course every now and then, someone used it all…

When taxiing, the pilot was so far away from fixed ground references, it was easy to get going way too fast. To a newbie, what looked about right might turn out to be 40 or 50 mph (not kidding) and there was more than one 747 put in the mud by attempting a turn at too high a speed. The fix was to select ground speed on one of the Inertial Navigation System (INS) and using it to check the speed when taxiing. Thirty mph was TWA’s max.

My first (really) good look at the airplane was during training in New York, on our walk-around in our JFK Hangar 12. A seven four was in for heavy maintenance so it was well torn apart and we could see just about everything. They were cleaning the center (fuselage) fuel tank, which had a capacity of 86,000 pounds in the dash 100 (over 12,800 gallons), and it was big enough to sleep six comfortably if it were a cabin in the woods.

The cargo holds were big enough for several of those large igloos used. Our instructor had us sit in the cockpit while he walked ahead of the plane and told us to signal when we first saw him. Then come down and have a look. I was amazed to see that he was about 100 ft. in front of the cockpit!

I’m not sure what our longest flight was in the 747, but it was probably JFK – TLV, at 5677 statute miles. It was the flight I flew the most in my last couple of years and it was also my final flight. It was scheduled to leave JFK at 6 pm local and arrive TLV at 2:20pm local the following day. Then we’d have a nice long layover and leave TLV 2:15am local and arrive JFK at 11:15am. Scheduled block time was 22:05 and trip credit was 24 hrs. We were flying 75 hr. months, so 75/24 = only about three hours short of a full month. Work nine days! A pretty good month, I’d say.

And a little secret: it was almost more fun to taxi it than to fly it.