Blog - Latest News
You are here: Home1 / Article Archive2 / I was there3 / The not-so-glamourous life of a flight engineer

When in a social setting with non-pilots, they will often ask, “What is your best scary flying story?” Honestly, nothing comes to my mind. The truth is that certain moments of concern did happen but those items are imbedded in story strings that require a lot of metabolic expenditure to conjure up.

To throw that non-pilot inquiry off course (just for fun), I was tempted to tell a tale which they would not expect. Such as… 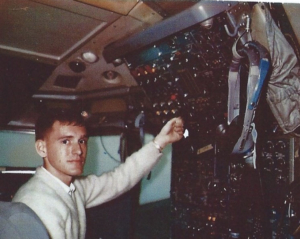 Flight engineer training prepares you for a lot, but not everything…

Around 1971, I was a flight engineer on a Boeing 727 flight from Los Angeles (LAX) to Seattle (SEA). It was a morning flight and the stewardesses were serving breakfast. In those days, the cabin crew were genuinely called “stewardesses” and were all female… and they served real meals appropriate for time-of-day. In the case of this day’s storyline, the real meal was omelet and sausage plus fruit cup, served on real trays in heated china cups, even in coach class.

At some point after breakfast (cockpit included) we were admiring Crater Lake in the clear skies of Oregon when the “A-stew” came up to retrieve our meal trays. The A-stew was the cabin boss and no one minded the terminology of the era. This A-stew had a bit of sass though and let us know that if she was a “stew” then we, the guys in the cockpit, were “piles.” With further cockpit discussion, we developed some clarity about the titles and roles of “stews” and “piles.” That group chat made the flight somewhat noteworthy but what came next really sealed the deal.

Not too long after she left the cockpit, there was a ding on the interphone. It was the A-stew and she had a request. Usually the request was to turn up or turn down the cabin temperature, but in this case she was asking me to come to the cabin and bring one of “my” coat hangers.

To digress and explain, it was not uncommon for the flight engineer to help the stews in the cabin with small mechanical problems during cruise flight. This might entail changing a reading light or fixing a stuck door on a galley carrier. The request for a coat hangar had me a bit flummoxed and even defensive since, during preflight, I might have stolen one of her cabin closet coat hangers to make sure that there were enough in the cockpit for the pilots (three each or more). Sometimes it was a preflight game for a pilot and stew to steal coat hangars back and forth. This was played against the era of recession wherein the airline was economizing, laying off staff, and equipping the cabins with fewer pillows, blankets, and amenities like magazines, decks of cards, and coat hangers. Our passenger loads were also light, this one perhaps half full.

Now, with the captain’s permission, I donned my cap and un-coated a hanger—and headed for the cabin. The A-stew was right there outside the cockpit door with a grimace on her face. Without speaking, she directed me to the adjacent lavatory (we called them “blue-rooms”) and pointed to the toilet, me holding the coat hanger. Her gesture indicated a stirring-poking action and I soon got the idea. 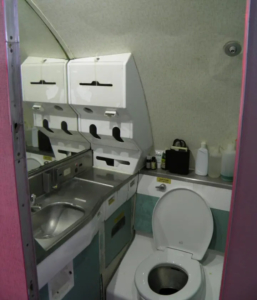 Oh the places you’ll go as an airline pilot.

Within the stainless steel toilet bowl and splash-guard was the biggest example of solid excrement that I had ever seen. It was wedged sideways and resisted any poking or pushing with the wooden end of the coat hanger. This action made me slightly gaggy but I figured it was my duty to man-up and make the problem disappear.

Eventually, the petrified stool gave way and fell into the blue soup beyond the splash guard. I was a hero for the moment but now the paradox was what to do with the soiled coat hanger. Communication with Miss A-stew continued to be pantomime since not a word was spoken between us. Her hands indicated she did not want the coat hanger returned. We both looked back into the passenger cabin, using the lavatory door as a shield. Several aisle-seated customers looked quizzically at us. Without words, I think we were both looking for the culprit or wounded party.

The captain and co-pilot got quite a guffaw from my story of the cabin visit. The offending coat hanger showed no signs of taint but, as precaution, was wrapped in toilet paper and laid gently upon the cockpit floor for later disposal. The captain mentioned that someone was likely very embarrassed and we shouldn’t make a big deal out of this.

During the deplaning process, it was customary for pilots and the A-stew to stand at the forward entry and thank our customers for flying with us… in the Friendly Skies. Once our shutdown duties were complete, we did just that on this flight… with an agenda. The A-stew and I exchanged some mutual visual signals (eye rolling, winking) which I interpreted to mean that she was on the lookout for the offending party. We were watching for someone with guilty look or maybe walking funny. No joy within the initial exit queue.

Soon enough, we all got the giggles and had to duck back into cockpit and shut the door. The culprit was never identified. John Meyers
John soloed in a J-3 Cub at age 16 in Newark, Ohio, attended Ohio State in 1961, and managed to begin an airline career at United in 1966. He maintained a connection to small airplanes, both legacy and experimental types, owning some interesting types along the way. Examples include: Harmon Rocket II, Citabria, RV-6, Maule, and now his “old-man’s airplane,” a 1963 Cessna 150 TD (taildragger).

Memories of flying the Convair 880