Blog - Latest News
You are here: Home1 / Article Archive2 / I was there3 / Memories of flying the Connie 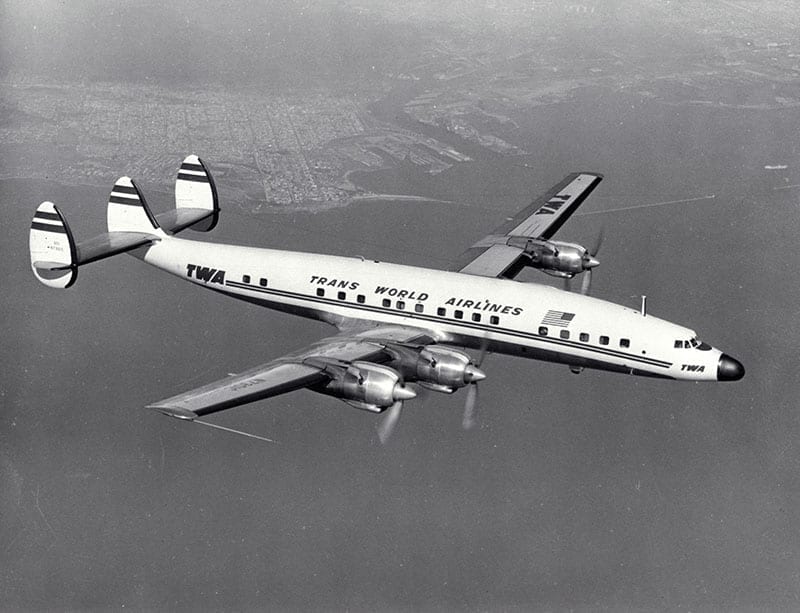 The first big airplane I ever flew was the Lockheed Constellation, affectionately known as the Connie. The Connie simulator was just a procedures trainer (no motion, no visual) so most of the flight training was done in the airplane. I confess I was scared to death! The biggest thing I had ever checked out in was the Piper PA-23 Apache. I had had a few hours in the right seat of a Beech 18 and a Lockheed Lodestar, but of course was not allowed to touch anything except fly it a bit in cruise as neither had an autopilot.

But, most of all I was scared because in those days it was either up or out. No second chances and no reverting to previous status. When new hires started checking out as captains a couple of years later, 14 percent of the DC-9 student captains were terminated. Less than half were low time former GA pilots.

In my first briefing, our instructor, who knew we were little airplane pilots, said in a heavy southern drawl, “Now you boys, don’t be spooked; she flies just like a big old Cub.”

But, know what? It really did. Quite heavy on the controls but (I later learned) so are most T-category airplanes. The Connie had hydraulic control boost, but still had mechanical (cables) control linkages. If you lost hydraulics and went into manual reversion, then it took two guys to wrestle it around!

The airplane, mechanically speaking, was WWII technology. That was to my advantage as that is what we were taught in A&P school. No big surprises, no radical new concepts as with the jets which were still “sci fi” stuff for most of us.

And, as far as flying it, indeed, it was about like any other propeller type airplane, just bigger. It’s like one old gray beard described his check out in the Connie in the ’50s, “They told me what she stalls at and what she glides at, and that was about it.”

There is one thing about the Connie that was quite different: It was most definitely a flight engineer’s airplane. These are some of the controls the F/E had access to, but the pilots had limited or no access to: propeller pitch controls; mixtures; carburetor heat and alcohol; prop alcohol; feather buttons and firewall shutoffs; pressurization controls; hydraulic system controls; electrical system controls, and others that don’t immediately come to mind.

The F/E handled the throttles except on takeoff and landing. On takeoff, the pilot flying would push up the throttles and call for the F/E to “trim throttles” and he would set TO power.

I flew the Connie in its sunset years – ’64 into ’65; the last TWA Connie flight was in 1967. In my time, they were mostly used for short hauls, so a typical day might be ORD-DAY-CMH-PIT-HAR-LGA. We flew them at low altitudes and low power settings to conserve engine life.

I only had one long flight. It was in an L-1049-G; ORD-DEN-OAK-SFO. The airplane was configured as a night coach (the hostesses called it a roach coach). It held 92 smoking, drinking, barfing passengers and stunk beyond belief by the time we reached the West Coast, just about sunrise. The air flow through the cabin was much lower than in the jets.

This was the first time I ever got high enough to have to shift blowers. To shift blowers, the engines had to be reduced to idle, so power was reduced on two symmetrical engines, the blowers shifted, then brought back up to climb or cruise power. This caused the need for a PA announcement in advance to prevent panic in the passenger cabin.

The author met his future wife while flying: “the only thing I ever stole from TWA.”

When we got to Oakland, my magnanimous captain allowed as how I might be privileged to fly the “big one” from OAK to SFO – which may have been the busiest 12 minutes in my entire life. Take off on runway 27 and land on runway 28 – I don’t think either airport had east/west parallel runways at that time. Just about enough time to do the before starting, after starting, taxi, before takeoff, after takeoff/climb, cruise, descent, landing, after landing and secure checklists.

If I had it to do over again, I would have just left the gear down. No one would ever have known the difference.

The perfect pilot myth is finished