Blog - Latest News
You are here: Home1 / Article Archive2 / I was there3 / Why I love the NOBBI arrival 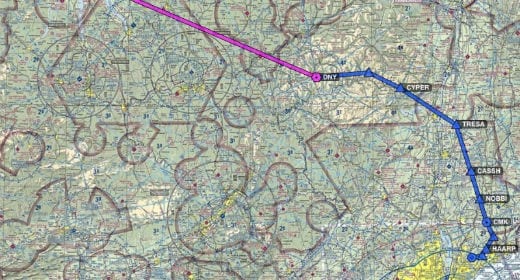 Editor’s note: With this article, we’re kicking off an informal series on your home airport. We’d like to know what it’s like to fly in and out of your home base, from the controllers you talk to to the route you fly. What makes it special? Share your story with us (pictures are a bonus): [email protected]

For those of you who do not fly out of the Northeast, the NOBBI5 Standard Terminal Arrival Route leads you into Westchester County Airport. KHPN is where my 1980 Mooney 231 is based. It’s the last stretch home.

The NOBBI5 arrival to HPN.

Flying this route I’m usually coming from D38, Canandaigua, New York, where one of my daughters resides in the summer. On Low Altitude Enroute charts the NOBBI Star begins for me at the Delancy VOR, and continues through a list of five letter identifiers which are intersections (PETER, CYPER, TRESA, CASSH) to NOBBI, which is not an intersection, but a fix nine miles from the CMK VOR, another part of the route home, depending on which way the wind is blowing and whether the ILS is working.

Those five letter identifiers are abstractions without much meaning if you detach them from the terrain that they mark. And those points on the terrain are in the area of many points of interest. My Garmin 530W is doing most of the work on this route, so all I have to do is to pick up the ATIS and set up the approach. Only once did I have more of a workload, having been told to hold on a nearby VOR because of a thunderstorm over KHPN.

When the weather cooperates, there’s plenty of opportunity to look down from 7000 feet. South of the Delancy VOR are some prime trout streams in the neighborhood of Roscoe, the capital of trout fishing in the Catskills. I’ve had many a good time fishing these waters with good friends and family. Just northeast of PETER is Hunter Mountain, one of the better ski areas nearby, although not up to the level of New England’s best. South of CYPER lies the Esopus, another great trout stream known for its Rainbows. Beyond CYPER lies the Hudson River and on a good day one can look north as it flows past Albany and downstream almost to New York City. The view of the Hudson itself is magnificent, but there are numerous points of scenic and historical interest along its banks, some of which I will mention here.

A short distance to the north of TRESA is the Old Rhinebeck Aerodrome. This “museum” of ancient aircraft was created by Cole Palen who was inspired by the Shuttleworth Collection in England. Cole Palen is no longer around, but he is remembered especially for his airshows featuring dog fights between Sir Percy Goodfellow and the Black Baron competing for the hand of Trudy Truelove. On display are vintage World War I, US, French, German, and English planes. The planes are both replicas and originals. Included are a JN-4 Jenny, a Great Lakes Speedster, a Bleriot X1, a Henriot, a Caudron, a Morane, a Demoiselle, a Nieuport, a Foker DR-1 triplane, a FokerD-V11, an Albatross, an Avro, and a Sopwith Camel.

In the summertime, weekend airshows continue although occasionally some shows are cancelled due to crashes. In most of these accidents the pilot survived unlike the situation on the Western Front in WWI, when the average life of a fighter pilot was two weeks.

Near CASSH is Stormville Airport known principally for its antique shows and flea market.

At NOBBI I can look over to the east at Danbury Airport where I bought my 1980 Mooney in 1981 from Dick Leinart. Dick was one of the old-time Mooney dealers. He was the proprietor of Connecticut Mooney which he started in 1959. He was the local sage when it came to Mooney information. He continued to fly into his 80s, but died at the age of 89. My plane was based at Danbury for a good number of years.

Looking to the west at NOBBI across the Hudson River, one can make out West Point with its restricted airspace R-5206. West Point has a visitors center and a museum open to the public on a daily basis. There are guided tours except during Graduation Week and at the time of football home games.

Boston Center steps me down from 7000 feet and turns me over to NY TRACON and it’s time to make the final adjustments to the Garmin 530W and go through the checklist to prepare for a landing. I have to say that the feeling of exhilaration after a successful and error-free conclusion of a good flight lasts me well into the next few days when I am ready to do it all over again.

The most fun I have ever had in an airplane

Navigating in the old days
Scroll to top