Blog - Latest News
You are here: Home1 / Article Archive2 / I was there3 / Skunked at Mount Snow–again 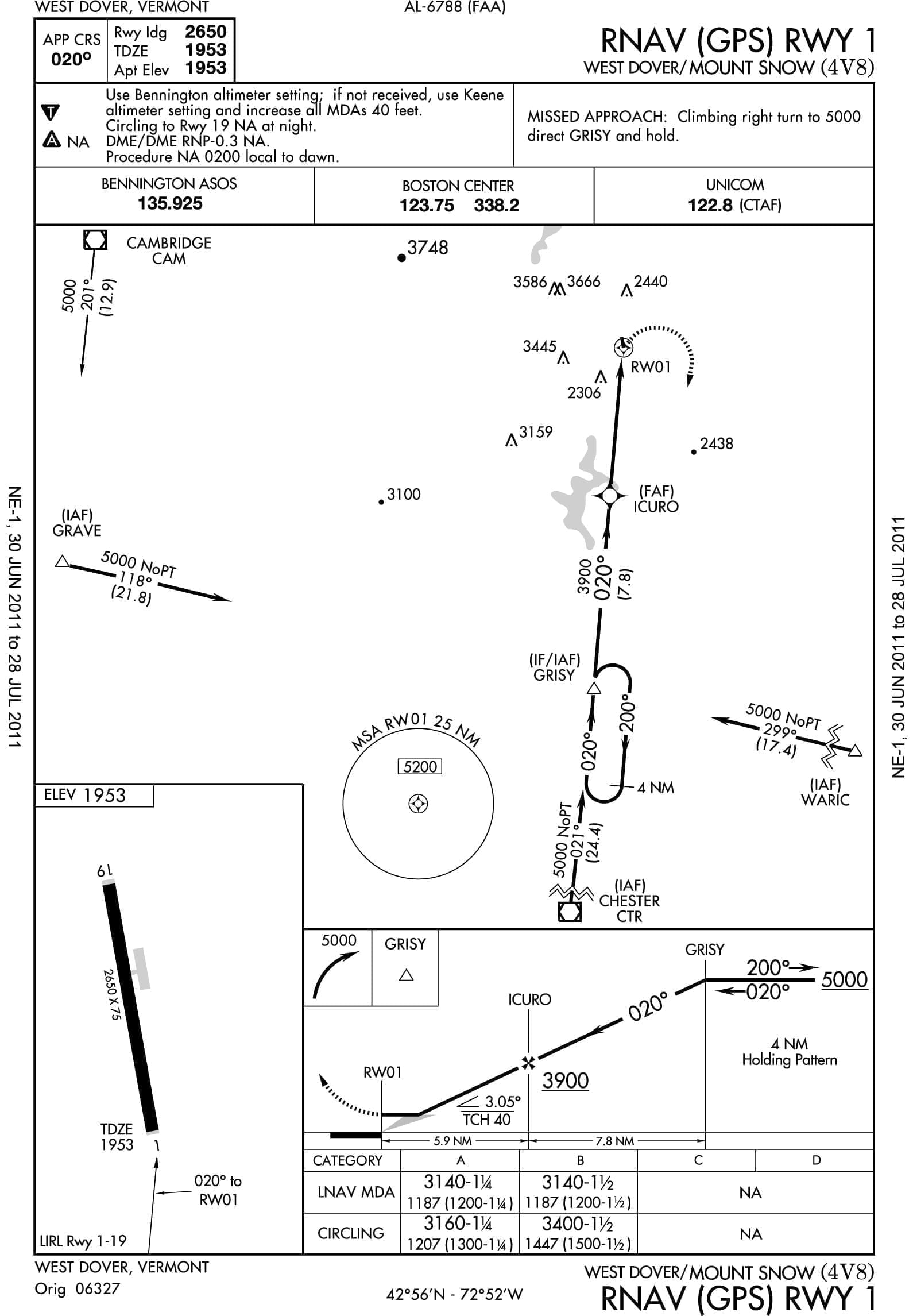 A late June family wedding was to take place in West Dover, Vermont, at a location about a mile from the Mount Snow Airport. I have had a love/hate relationship with this airport for years. It’s the only airport that I have been unable to get into a whopping 75 percent of the time. Weather, wind, and runway conditions—or a combination thereof—have all stymied my attempts to land there over the last 15 years. This time, however, would be my first attempt to land at Mount Snow in the summer and I thought my chances of getting in would be much better, since I didn’t have to deal with icing, an unplowed runway, or high snow banks as with previous winter arrivals.

Ever since the wedding invitation came in the mail a few months prior, I’d been fretting over how to squeeze a Baron loaded with 5 people and luggage into a 2,600-foot strip at an elevation of 2,000 feet. Accompanying me on the trip would be my wife, my brother Rob, and his wife, and my Mom.

Not much margin for error at Mount Snow.

Thankfully, my Dad’s old Baron D55, currently flown by my two brothers and me, is a stellar performer with 600 total horsepower and a useful load of 1,900 pounds. With five people, luggage and minimum fuel to depart out of Mt Snow, I calculated we would be more than 800 pounds below the airplane’s max takeoff weight, allowing us some performance margin on departure. Engine-out climb gradient was going to be marginal at best if we blew an engine going out of there in bad weather, however.

My only successful trip to Mount Snow was about 10 years ago when my wife and I went up for a day of skiing. I remember the runway being in fair condition back then and it hadn’t been resurfaced since, so it couldn’t have gotten better in the last decade. It is a private field so a phone call was in order to get permission and some current information.

I rummaged through my pile of business cards at home and found a card for Bob North of North Real Estate, who owned the airport. I called the number and asked for Bob. Instead, I got Bob’s wife, well, actually it was Bob Jr.’s wife. It seems Bob Sr. was killed attempting to land his Aerostar at Mount Snow some years ago. Immediately, I felt a little more trepidation about flying my family into this airport. After all, the owner of the airport lost his life attempting to get in there. He certainly would have known the risks and local surroundings better than I.

I expressed my condolences and related my meeting with Bob Sr. at his office a decade ago when I actually made it in to Mount Snow. Bob Jr., however, is still actively flying as a charter pilot and using the Mount Snow Airport to commute (weather permitting) by airplane to his charter job. Bob Jr. gave me the rundown on the runway condition (poor, but doable) and even offered me one of his cars that were parked there.

The morning of our trip, we had to pick up my mother at MacArthur Airport on Long Island, New York, where she had been visiting a friend. (See Father’s Day Trip for Mom.) My brother, Rob, a corporate jet pilot, flew a nice ILS to Runway 24 at ISP and we picked up my Mom at ExcelAire, the FBO with the nice folks where I dropped her off the week prior. After swapping butts in the Baron’s left seat, we headed due north to Mount Snow. We were constantly checking the XM weather on our handheld Garmin 496. The AWOS at Bennington, Vermont 20 miles to the west painted a rosy (marginal VFR) picture while the weather to the east at Keene, NH was IFR, but no problem for the ILS there.

Mount Snow has an RNAV (GPS) and an NDB Approach to Runway 1, the lowest of which will get you down to about 1,200 feet above the airport. It’s surrounded by hills that reach as high as 3,600 feet, so you don’t want to be in the wrong place in the clouds around there.

As we flew northward, we grew increasingly skeptical of our ability to get in as the top of the clouds were well below our 7,000-foot cruise altitude with no breaks to be seen in any direction. We discussed our options and decided to give it a shot and if no joy, head to Keene where there was an ILS and a rental car. Bennington, where the AWOS advertised decent weather, was considered but we couldn’t roust anyone on the Unicom to check on cab or rental car availability.

The RNAV approach at Mount Snow only goes down to 1200 ft.

We loaded Mount Snow’s RNAV approach into our GNS 430 and I elected to let the autopilot fly the approach while my brother and I monitored its performance. Our Baron has a Cobham (S-TEC) System 30 autopilot with the GPSS roll steering option. It can only fly the lateral portion of the approach, so I managed the altitude. We set the handheld Garmin 496 to display terrain for extra situational awareness. Level at the MDA for a mile or two, we saw nothing but white out of all the windows. Once we reached the missed approach point at the runway end, I stood the airplane on its tail and climbed out while reversing course to the south.

Boston Center naturally, wanted to know our intentions and we made our request to head for Keene, NH. Meanwhile, the time pressure was on. The wedding was at 2 PM and we punched out of Mount Snow just after Noon. Once we finally got turned towards Keene, I put the hammer down and motored our way there at better than 200 knots. We rolled onto the ILS to Runway 2 at Keene and broke out at about 800 feet.

After we parked, we sent the ladies inside the FBO to get changed into their dresses, while I put the airplane to bed and brother Rob worked on the rental car. After about an hour’s drive, we ended up arriving at the wedding with just five minutes to spare. Rob and I brought class to the wedding by changing in the parking lot.

More than anything, this trip solidified the myriad benefits of having two qualified pilots in the cockpit. Had this trip been flown single pilot, it would have greatly increased the workload and risk factor in a high-threat area (IMC, non radar in the mountains). Despite the months of thinking about and planning this trip, it all went out the window as we neared our intended destination. Pilots of light airplanes always need to have a plan B and not be afraid to use it.

Everyone wants to get to where they are going with success, but you can’t let the pressure of a wedding or similar event get in the way of safe flying. I couldn’t help but think of John F. Kennedy Jr. as I planned this trip. He was under pressure to make a family commitment and turned a joyous wedding into an impromptu memorial service.

Today, my love/hate relationship with the Mount Snow Airport continues. I’ve made it in once out of four attempts, but I’m in no way ashamed. I haven’t scared myself, my passengers, or wrecked my airplane while heroically attempting to get in there. But I’m getting pretty good at flying that approach and missed!

Power to the people

Hurricane, inside
Scroll to top