Blog - Latest News
You are here: Home1 / Article Archive2 / I was there3 / Lettuce and cucumbers

Over ten years had passed since my wife and I had watched the annual Fort Lauderdale boat parade. Friends in nearby Pompano Beach had extended an invitation for us to join them on their boat. We would spend the night at their home and return the next day.

We hadn’t flown the airplane for a handful of weeks, so the trip was a great opportunity to exercise moving parts. I reviewed the forecast, the satellite picture, and the prog charts. Nothing significant.

Our Cherokee Six lives in Key West during the winter months. Because of a limited amount of store choices, Christmas shopping on the “mainland” was also on our agenda. It was a relatively short flight to Pompano Beach Airport, a trip we had enjoyed many times in the past.

The fact that I am an airline pilot who owns an airplane is certainly not news that justifies whooping and hollering. Working for an airline gives me an appreciation for the little things associated with GA flying. What little things put a smile on my face and a twinkle in my eye?

I use a gate card rather than TSA screening. I wear a pair of shorts and a t-shirt rather than a uniform. My departure time is usually an “ish” rather than a schedule. Scenery is viewed at altitudes rather than flight levels.

Although an IFR flight plan reduces the airspace and communication stress for somebody who is accustomed to a copilot, I threw caution to the wind and departed VFR. Besides, how can one fly up from the Keys and not take the scenic road? Eventually I would become a marble in the labyrinth of Miami’s Class B airspace. No big deal.

I chose the coastal route to Pompano. As predicted, I was forced to maintain 500 feet as we transited underneath Miami and Fort Lauderdale’s arrival flow. The low altitude kept me on high alert. If the spinny thing in front of the nose came to a stop, not much time would be available to find a suitable landing site, be it sand or water. On the other hand, assistance is nearby in the form of people and/or boats as opposed to a routing over the Everglades at higher altitudes. A dead stick landing in the Everglades is greeted mostly by reptiles.

Our arrival at the Pompano Beach Airport was uneventful…well, except for my firm touchdown. I relapsed into landing with the flat attitude of the 777 that I fly at work. Despite my underwhelming performance, I smiled as we taxied to the ramp. Years back we had been members of a local flying club at the airport. The club owned two Archers and a Cherokee Six. Our membership experience was pleasant, but not having to share an airplane was way cool.

The boat parade made for an enjoyable evening. We were anchored in a small cove with front row position. The light displays had become more sophisticated and spectacular than I remember, even on the smaller vessels. One boat had proudly mounted a retired Sabreliner in takeoff configuration.

The following morning, our friends graciously offered the family car for our shopping expedition. I checked the forecast and the satellite picture. It appeared that a weak cold front would begin to push its way through during the early evening hours. My plan was to tanker cheaper fuel at the Homestead General Airport for our trip home to Key West. Key West fuel prices were reaching astronomical levels.

Considering the forecast, I indicated a desire to depart at least by late afternoon. My wife is well aware of my hyperventilation tendency at crowded malls. She wasn’t going to risk an attack by prolonging the shopping anyhow.

When we reached the last stop on my wife’s agenda, I remained in the parking lot. Utilizing a combination of the Wing X program and FltPlan.com, I began the process of pre-flight planning on my BlackBerry. Although the weather in Pompano was severe clear, it appeared that a very narrow band of light precipitation was moving across southern Florida. It was possible that I could be departing Homestead into rain. I filed an IFR flight plan.

As we proceeded south near the Key Biscayne area, the sky began to develop a charcoal color. I wrote the ominous appearance off as the combination of the setting sun and the approaching cloud layer. But the 20,000 hour flight time hairs were standing up on the back of my neck…

With little issues other than a 30º crosswind from the southwest, we landed on Homestead’s Runway 9. I completed the fueling process via a self-serve pump. In the fading light, I failed to notice that the grounding wire had jumped part of a winding off the spool during retraction. As many had done before me–and will again–I managed to create a tangled mess.

After wrestling with the grounding wire, I pulled out the BlackBerry to review the latest weather. The radar loop presented an approaching narrow strip of lettuce and cucumbers. No tomatoes. No problems. We departed into the starless night sky with the blackness of the Everglades below. I contacted a busy Miami Approach for my IFR clearance to Key West.

The portable Garmin 560 on my yoke displayed the Nexrad radar picture. Only a few patches of green were evident. Soon, the yellow lights of the outside world disappeared. The dim glow of the instrument panel illuminated streams of moisture flowing across the windscreen. Above the voices of the radio and the flow of air from outside, and the dull roar of a 300 HP engine, we could hear the intermittent tapping of rain striking the aluminum skin of the airplane.

The controller interrupted my focus with one statement that caught me off guard. “Be advised. I show an area of moderate to heavy precip at your 12 o’clock position. You are cleared to deviate in any direction.”

Say what..? I hesitated for a moment, glancing at a benign radar image. Recalling the direction of precip movement, I disconnected the autopilot and began a turn to 180º. We were greeted with 30 seconds of turbulence that both my wife and I would not care to repeat. When the lights of Marathon Airport appeared, my only passenger suggested that I might consider landing. The thought crossed my mind.

It does occasionally lie

When portions of the lower Keys became visible, I was fairly confident that the worst was behind us. A check of the current Key West METAR on the Garmin 560 confirmed the theory. We landed without incident, rolling through puddle-laden taxiways before we came to a stop in front of the FBO.

Later, I compared notes with the friend whom we had visited for the boat parade. He was also a captain for my airline. He had departed MIA in a 757 earlier the same evening. Although he had checked the WSI weather picture in Operations and had made a similar assessment, the on-board weather radar indicated that a band of red had formed just as they departed toward the west. As they avoided the area, the flight experienced a brief period of intense light chop.

The moral to the story? Trust my instincts first. Despite the non-threatening radar appearance of green, it was a well-defined, narrow line. A narrow line is a sharp contour of unstable air. And the second moral, don’t believe everything you see on a Nexrad display. I am well aware that the display should not be used as a deviation tool because of transmission delays. In this case, even the real time sources couldn’t keep up with the changing conditions.

Lettuce and cucumbers? Maybe not the next time. 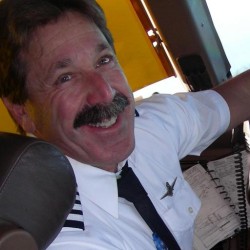