Blog - Latest News
You are here: Home1 / Article Archive2 / Technique3 / Range: it’s not all about miles… 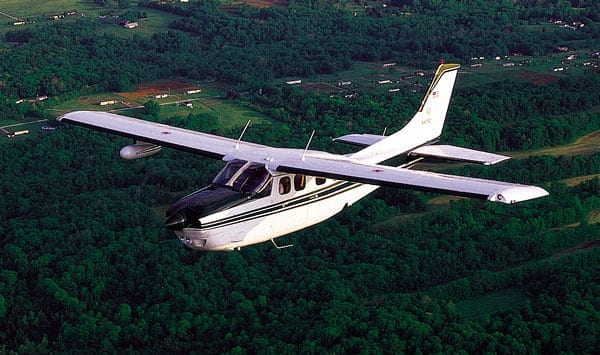 Most people talk about the range of airplanes in terms of nautical miles. There are formulas that are used to project the IFR range of turbine airplanes. Some consider wind probabilities and all include a trip to an alternate that is a specified distance away.

That can work when your cruising speed is a big number. When cruise is a smaller number, range in miles is meaningful only when there is no wind, which is not very often, especially in the active seasons. The simple fact is that in our piston-powered airplanes the wind aloft can be a substantial percentage of our cruising speed.

The real number is endurance, in time. Paying attention to that number is what keeps you away from that most embarrassing and inexcusable business about fuel exhaustion.

Endurance combined with true airspeed and wind does translate into miles and experience with the P210 that I owned for 28 years taught me a lot abut this subject.

The airplane came with a standard 90-gallon fuel capacity. That gives a lot of endurance in a normally aspirated 210, a bit less in a turbocharged T210 and even less in a P210. From the first, I wished for more fuel capacity.

I did a lot of long distance travel in the airplane and most of my trips involved a fuel stop. Stops cost both time and money. I figured a fuel stop added an hour to the trip and cost at least $100 bucks when gas was $3 a gallon. Maybe it would cost over $200 today.

The fuel stops were most painful and expensive on eastbound trips, with a tailwind. The tailwinds got better the higher I flew and when whizzing over the ground at better than 200 knots, the thought of a stop was not pleasant. The P210 was a sluggish climber, especially with a load. After a fuel stop that meant at least 30 minutes of arduous climbing at a high fuel flow to get back up to altitude.

Slowly I learned how to minimize the cost of stopping. If I was flying from Kansas or Texas back to the northeast, I would fly as far as possible on the first leg, usually at Flight Level 190, leaving a shorter distance for the second hop. I wouldn’t climb as high for the shorter leg, thus saving some fuel and maybe even a little time.

I did manage a couple of nonstop trips to Trenton, New Jersey, from Wichita, Kansas, and these were possible because of the combination of a tailwind and a long range cruise power setting.

I was not one to often fly airplanes at low power settings to save fuel, as such. I always wanted to go as fast as possible, or at least get there as quickly as possible which sometimes meant slowing down when there was a tailwind. (With a headwind, slowing down to cut the fuel flow is an exercise in futility.)

With a tailwind of, say, 40 knots, I could give back 20 of those knots, cut fuel flow from 100 pounds per hour to 78 pounds per hour and increase the available endurance from about four hours up to almost six hours. Actually, five hours and 45 minutes was the longest I flew the airplane on 90 gallons of fuel.

Then one day I made things better by installing a 29.4 gallon fuselage tank. O&N Aircraft Modifications did the work. It was a well done installation that took only about the bottom third of the baggage compartment. The fuel was pumped into the right wing tank after two-thirds of the fuel in that tank had been used.

When you add fuel like that, it goes straight to the bottom line. The reserve and the allowance for taxi, takeoff and climb are the same so the approximately 1.76 hours (at 100 pounds per hour) goes directly to the endurance available for cruise.

Maybe this will convince you that my record keeping is too good but I can tell you that the additional fuel made nonstops out of 106 trips that would have required stops with the standard 90-gallon fuel capacity. That paid for the three thousand or so dollars the tank cost about three times over. That was a rare bargain.

The extra fuel also took the sweat out of a lot of trips. One that comes to mind was from Wichita, Kansas, back to Maryland. A lot of different factors went to work on the fuel during this trip yet everything worked out well.

I started out at Flight Level 190, with a good tailwind. A jet core was dipping down this day, though, and eventually the air at FL190 got uncomfortably rough. I can remember several other times when the air got so rough at higher altitude that I went lower for a better, albeit slower, ride.

Another factor was the weather. It was crummy in Maryland, much worse than forecast. How much time was I going to be willing to squander on approaches close to home before scampering to an alternate?

I tried the ILS to Frederick, Maryland, and there was no reward in the windshield when flying at the decision height.

Baltimore, BWI, had pretty good weather so the best option was to go there. As luck would have it, they were using a convoluted back course approach that used a bunch of DME fixes for stepdowns. If I could have reached into the future for a WAAS GPS it would have been nice but I had to do it barefoot. At least the HSI made the back course approach easier. The reserve fuel of 100 pounds was intact when I landed at BWI.

The additional fuel also did wonders for my Florida travel, even in the windy seasons. I think I made it to or from Florida nonstop every time, except maybe once or twice when there was a strong southwesterly flow. I logged 19 nonstops between Maryland and Vero Beach, Florida, and 26 between Maryland and other airports in Florida. I say “Maryland” because I used three different airports, Westminster, Frederick, and most of all, Hagerstown. I also based just across the line at Winchester, Virginia for a short while.

My longest hop was from Dallas, Texas, to Frederick, Maryland. It took six hours and 20 minutes and to preserve my sacrosanct 100 pound fuel reserve I did have to fly at somewhat reduced power.

Do you trust your cockpit instruments?

My friend Mac McClellan sometimes scoffed at my long nonstop trips, saying he would rather land and stretch and have a soda or something to eat. I took care of all but the stretching by taking a cooler with drinks and a bologna sandwich or three plus maybe some peanuts and cheese crackers.

This brings us to another element of range or endurance. A lot of my longest trips were solo and I always carried relief bags. I was just never one to dehydrate myself so I wouldn’t have to pee while en route. Even so, I didn’t have to relieve myself often on trips of four or more hours.

My wife, Ann, flew with me for over 50 years and for thousands of hours and only twice did she request an unscheduled stop. And we flew some long nonstop trips. However, in the closing years of our flying she would always request that I leave the fuselage tank empty.

Endurance can become a big question in the new turbocharged Cessna and Cirrus singles with IO-550 engines. While the total fuel supply might look generous, if you fly these airplanes in the go-fast mode, they burn a lot of fuel. A hundred gallons can be gone with the wind in four hours. This means three hours endurance with an hour in reserve.

If your legs are, say, 500 nautical miles then three hours is more than plenty even with some headwind. With a big headwind it is not much. The advantage, though, to turbocharged pistons (over turbines) as that they can be flown low without an overwhelming fuel flow penalty.

Turbine and turbocharged airplanes do have something in common. Both are wonderful and speedy traveling machines with a tailwind and can be a bit slow with a headwind. In my P210, in the windy seasons, I sometimes took twice as long to get somewhere as it took me to get back east and home.

Too bad you’ll never be a pilot
Scroll to top