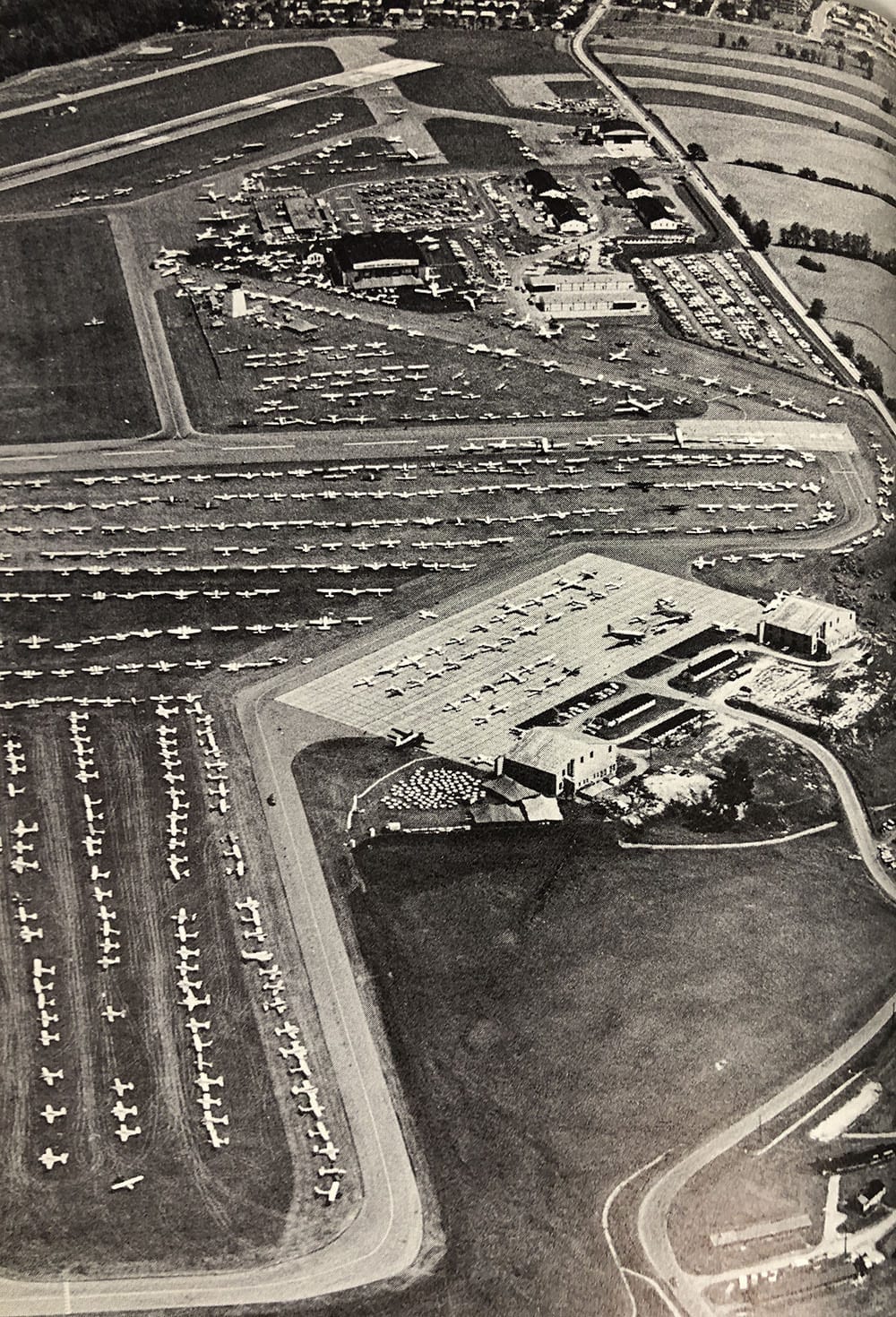 Before Oshkosh was the big show, the annual gathering in Reading, Pennsylvania, was the center of the aviation universe. In this article from the June 1968 edition of Air Facts, you’ll see what general aviation looked like during the heyday of the late 1960s. From the new airplanes to the celebrity pilots, it was a thrilling time to be a pilot.

Last year we said:  “It is hard to believe the Reading Show gets better every year but it does.”  That still holds true.  This year the show was expanded by a day, and the weather cooperated.  Warm June sun blessed Reading on Wednesday, Thursday, Friday, and Saturday, June 5th through 8th.

The crowd. At one point on Friday there were 1,132 airplanes on the field.

New airplanes?  The Derringer was there.  It’s a trim two-place twin with spectacular performance.  Ted Smith’s Aerostar was present, and it attracted large crowds. From England, the Britten-Norman Islander, a commuter-liner, made its Reading debut, as did the turboprop Handley Page Jetstream and the twin-engine Beagle.  The long and beautiful Beech 99 airliner was shown.  It is already in service, and is very impressive.  Aero Commander’s trim new Lark was on the line, and so was the American Aviation Yankee, and there were a lot more.

The hangar was full of exhibits.  A pilot could see a full line of aeronautical products, and choose whatever he needed.

A couple of incidents did mar the show. Two airplanes, one expensive one and one very expensive one, were altered in the course of demonstration flights – while being flown like the consumer would never (hopefully) fly them. Both these airplanes came within a hair of being totally busted, right in front of the crowd.  The harm such a thing would do to aviation is incalculable. Maybe in future shows things will simmer down to minimize the risk of a tragedy.

Reading Tower did a masterful job of handling traffic. There was a lot of it to handle, too. The traffic counts were: Wednesday, 1,809; Thursday, 2,225; Friday, 3,269; and Saturday, 2,068.  When you consider that the traffic is almost all within about 12 hours each day, and that the airport doesn’t have parallel runways, that is really something. It would be at an annual rate many times that of Chicago O’Hare – the busiest airport.

One observation:  If Reading can go from a normal airport to a high-capacity super-airport with virtually no change in facilities, why can’t other places do the same thing?  Many airports have a low traffic count on weekdays, and a high traffic count on weekends. They try to do this with the same operating procedures.  As a result conditions are chaotic on weekends.  Maybe FAA could develop a Reading formula to be used at some general aviation airports on pretty Saturdays, Sundays, and holidays.

The Reading Show.  It’s something for all general aviation to be proud of.  See you there next year.  Some of the things observed this year follow.

The AEROSTAR 600 from Ted Smith. The 600 is powered by two 290 engines, and was a very impressive performer on demonstrations at the Reading Show. It is a full 6-place plus baggage. The price is $86,550, which includes electronics.

Just before the Reading Show it was announced that the American Cement Corp. had acquired Ted Smith Aircraft Company, and that it would be operated as a wholly owned subsidiary. Present management is to be retained. American Cement is headquartered in Los Angeles and has major cement divisions California, Arizona, Pennsylvania, Michigan, Hawaii, and Greece. The company is also involved in the manufacture of metal buildings and swimming pool equipment, and is one of the co-developers of Snowmass-at-Aspen, a Colorado resort.

The BEECHCRAFT 99 COMMUTER AIRLINER was at Reading, and it is a very impressive airplane. Note in the interior picture that the passengers have plenty of windows. This picture was taken from the rear seat.

The airstair door is at left, and there is a baggage compartment at the rear of the cabin as well as in the nose. The airplane is already in service and it looks like it will be another one of those classic Beechcrafts.

The AMERICAN AVIATION YANKEE is moving into the production stage, and 10 are scheduled for delivery by August 1st. Three dealers have been appointed. The YANKEE, which began life as the Bede, is powered by a 108 horsepower engine, and the price for a standard airplane is $6495.

The HANDLEY PAGE JETSTREAM, a turboprop executive aircraft from England, can also be used as a commuter-liner.

The BRITTEN-NORMAN ISLANDER is a basic airplane. The gear is fixed, and everything is functional. Power is 250 hp each. The airplane can carry 10, including pilot. Quite a number have been sold to 3rd-Level carriers in this country.

The DERRINGER is a 2-place twin. It attracted a great deal of interest at Reading, and those who flew it were enthusiastic. The questions, though: “Will a 2-place twin find a market?”

The exhibit area in the big READING hangar. Every imaginable aeronautical accessory was on display, and this year they had to add a tent at the far end of the hangar to accommodate additional booths. Harrisburg Flight Service Station maintained a pilot briefing center in the hangar.

DANNY KAYE, one of the airborne celebrities who came to Reading. He came in a Jet Commander, at the Israel Aircraft booth.

Notable GATES LEARJET arrivals included ARNOLD PALMER. Arnie uses his jet on the tournament circuit as well as in connection with his other business interests.

The Great Godfrey (Arthur Godfrey) is pictured with aviation personality Torch Lewis. The number on the Learjet he was flying ended in GA (for Gates Aviation), but when that familiar voice came over the radio, inbound, it was “594, Godfrey Arthur.”

Piecing it together after a flight goes awry