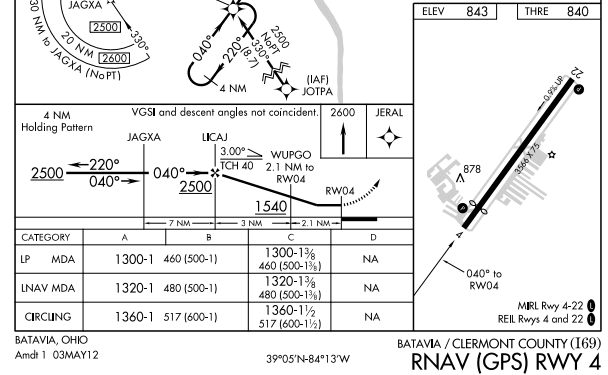 You’re a current instrument pilot and you even have one of those fancy WAAS GPSs in your panel. After some practice, you’ve just about figured out this whole LNAV vs. LPV approach deal–the first is an old school “dive and drive” non-precision approach; the second is basically an ILS that uses GPS instead of ground-based navigation aids.

But what’s this new LP approach that’s showing up on some approach plates? Have the rules changed?

LP approaches were actually introduced by the FAA in 2009, but they are just now appearing in large numbers. As of May 2012, there are over 280 active LP approaches. Compared to the 2800+ LPV approaches, this is a small number, but there enough of them out there that you’ll encounter one sooner or later.

So what is an LP approach? Actually, it’s just what it sounds like. You probably learned that LPV means “localizer performance with vertical guidance.” Logically, then, LP simply means “localizer performance.” The important point is the lateral guidance is angular, with needle sensitivity increasing as you get closer to the missed approach point (think triangle). By contrast, on a traditional LNAV approach, CDI sensitivity is the same from the final approach fix to the MAP (think rectangle). But unlike an ILS or LPV approach, there is no glideslope on an LP approach. Think of it as the 21st century version of a localizer approach.

Because of the angular nature of the LP approach guidance, the protected area is significantly smaller than for an LNAV approach. This means an LP approach will often result in lower minima than a plain vanilla LNAV approach–ideally with an MDA around 300 ft. AGL. In practice, though, many LP approaches have minima that are only slightly lower than the existing LNAV approach. It’s not much of an upgrade, and there is a downside, as we’ll soon see.

So why doesn’t the FAA just put in an LPV approach? Usually it’s due to obstacles, terrain or infrastructure limitations at the airport. The FAA is basically saying, “you’re not going to get an LPV approach, so this is as good as we can do.”

Flying the actual approach is easy, and exactly like a localizer approach. Intercept the final approach course outside the final approach fix, watch for your GPS to annunciate LP, hit your crossing altitudes on the descent and stop at MDA while you look for the runway. No problem, right? Maybe not, except for three important questions.

First, you’ll notice that an LPV approach chart will not show LP minima, just LNAV/VNAV and LNAV in most cases. This is not like an ILS that can be downgraded to a localizer approach on the fly. Likewise, an LP approach cannot downgrade to an LNAV approach. If you are flying an LP approach and the lateral integrity limit is exceeded, you’ll need to fly the missed approach.

There are currently 282 LP approaches.

Secondly, what about an advisory glideslope, one of the major advances in WAAS GPSs? Remember that if you fly an LNAV approach using a WAAS GPS, you’ll get a handy vertical needle to track. It’s not a true glideslope, just a way to make your descent from FAF to MAP smoother. It’s a huge aid for situational awareness.

Unfortunately, as of today, your GPS will not provide an advisory glideslope on an LP approach. This ends up being a serious drawback for only 60 ft in lower minima (on average) than a basic LNAV approach. You’ll need to plan your descent and make sure you hit MDA with plenty of time to look for the runway environment.

Finally, and most importantly, can your GPS even fly an LP approach? This is a type of WAAS approach, so for starters you’ll need a WAAS-approved GPS (like a Garmin GNS 430W or GTN 750). But that’s not enough. For Garmin 400/500W series navigators, you’ll need software version 3.3 or higher to enable LP approaches. GTN and G1000 panels do not require a software upgrade.

But even with the right hardware, you still can’t fly an LP approach right now. That’s because the Jeppesen NavData database does not support LP approaches. It’s a completely new type of approach, and Jeppesen is still working to integrate these into your normal update cycle. Their goal is to support LP approaches “sometime soon,” so stay tuned.

What happens today if you try to fly an LP approach? Nothing. Your GPS will operate the same as before, and just show the LNAV (or LNAV+V advisory glideslope) approach.

LP approaches are not going to take over the world anytime soon. But they’re popular enough that you’ll probably have to fly one at some point. Understanding what to expect will save you time, confusion and maybe even some embarrassment when they finally become available.

Blackbirds and the Colored Air Circus of 1931

To South America in a Piper Arrow
Scroll to top