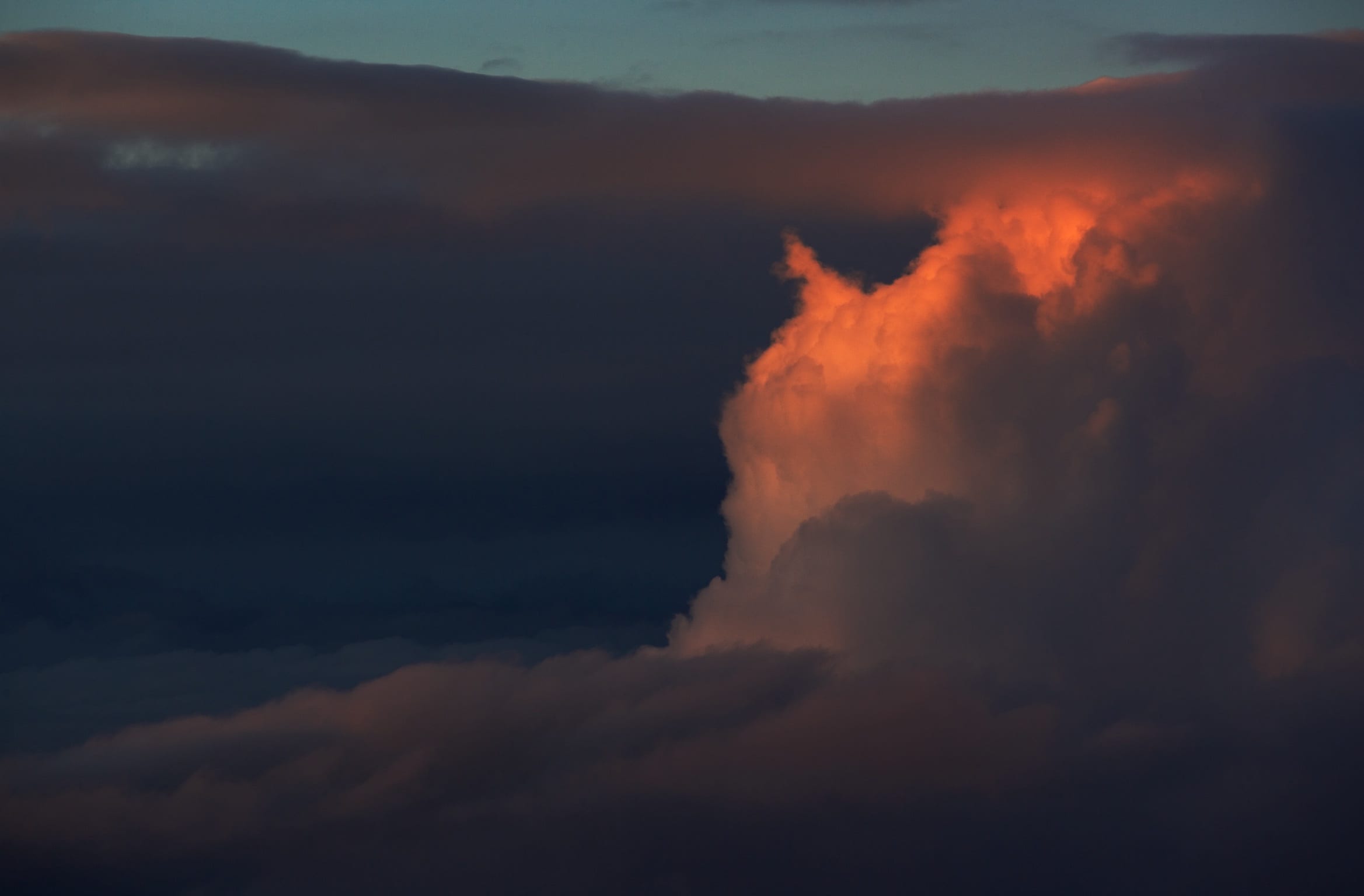 Climbing out from Zanesville Municipal in solid clouds that reach to the moon for the one-hour morning flight to Cincinnati Lunken in our new Arrow the day after Christmas, 1973. The ink is barely dry on my instrument ticket. I’m totally engrossed in aviating, navigating and communicating. Scan, scan, scan. Glance outside occasionally to check for ice.

Level off at 6,000, our assigned altitude. Punch on the autopilot and check my three passengers for the first time since takeoff.

Our 15-year old daughter smiles back at me from the right seat. I look over my right shoulder to check my wife and 11-year-old daughter. What? No! Can’t be! They’re sobbing and gasping for air. A sheen of perspiration glistens on my wife’s forehead. Over the roar of the engine she screams, “We’re diving! We’re diving! We’re going to crash!” She sees only the round, gray barrel of nothingness outside. She has vertigo!

Do you know how your passengers feel about flying in clouds?

After a few long seconds of staring at her and thinking this-can’t-be-happening, I turn back to the panel to make sure that all is as it should be. It is. I reach around with my right hand and give her knee a comforting pat. “No. We’re straight and level. Everything is okay.”

She looks blankly at me through tear-filled eyes and simply shakes her head. She doesn’t believe me. Why should she? Her every sense says we’re diving. My imagination runs rampant as I think about what might happen. Hypoxia, fainting, vomiting, heart attack, stroke, more screaming, violent movements that could endanger the flight. I need to do something, and quickly. My heart rate increases. I feel the first tremor of panic rise in my chest.

I look back at the panel in an effort to calm myself. For a long moment I concentrate on flying. It helps. The shaking stops. Still straight and level at 6,000. No ice. Engine running perfectly with all gauges where they should be. Autopilot engaged and tracking the assigned heading. Nav/comms and transponder working.

How did I get us into this situation? My new instrument ticket had made me over-eager to show the reliability of Arrow flight. Some years earlier I had taken my new bride for her first ride in a small airplane, which a Cessna 140 is by anyone’s definition.  My mission that day was to show her the beauty of flying over the late-afternoon October countryside with slanting sun illuminating fall color. Who could resist flying when it presented such a panorama?

As we waited in the run-up area for a plane to depart, I said, “That’s a B-25 just like uncle Tony flew on in the Pacific.” There was no tower at ZZV to remind the unthinking, “Caution wake turbulence from the departing B-25.” We taxied into position as the bomber broke ground. I applied power and the flight went really well for the first few seconds. At about 150 feet AGL, we whipped knife-edge left, then knife-edge right before I regained control. I had heard about “Prop Wash,” as it was commonly called in 1956, but I did not appreciate its potential violence. That two-second learning experience was a great teacher. Unfortunately, the advancement of my education was not enjoyed by my lady.

After that ride she occasionally flew with me in single-engine airplanes, but not with any enthusiasm. The Christmas 1973 flight in the new Arrow presented an opportunity to demonstrate that this airplane and my instrument rating gave us a fun, reliable method of family travel. My Grand Plan. Visions of family flying trips to far-away places danced in my head.

But beware. Just because you mess something up once doesn’t mean you won’t mess it up again.

The weather on the Christmas Day flight to Zanesville was in decent VFR weather. Everyone liked the one-hour plane ride much better than three boring hours in the car. It was great fun watching the traffic recede as we paralleled freeways. Wahoo! My Grand Plan was working perfectly. Florida here we come!

The next morning, the low overcast with tops way higher than we could fly showed up as forecast. Not to worry. This was all part of my Grand Plan. A great way to demonstrate the reliability of the airplane.

I phoned Zanesville flight service. Current local conditions were below the airport’s non-precision minimums, but it would not be an ITO. Tops were high. We’d be in the clouds all the way home, but the weather at Lunken was above its ILS minimums and forecast to improve before our arrival. No icing was reported over southern Ohio. I filed.

You spotted my first error, didn’t you? Being totally absorbed in moving my Grand Plan forward, I did not consider the possible dire consequences if we needed to return to ZZV after takeoff with the weather below its lowest MDA. Fortunately, this oversight did not come into play, but the low weather should at least have caused me to delay departure until conditions came up to minimums, if they did.

As I stood looking out a window of my in-laws’ house at the low clouds, my wife came up beside me and said, “We’re not going to fly in this, are we?” She had never flown in a small plane in solid clouds.

“Oh, sure we are,” I said.  This was perfect, I thought. She doesn’t think we can fly in this weather, but I’ll show her we can. “I called flight service and the weather is fine for our flight. I have an instrument rating. I can fly in the clouds.”

Bad myopic mistake. How much clearer could she have been that she had no desire to fly in in the clouds? Better for my half-baked Grand Plan if I had said, “No, of course not. I never want to intentionally put you in any weather you don’t want to fly in.”

But there we were in the smooth gray clouds at 6,000 feet, and my family was suffering the reward of my bad decisions. My initial verbal attempt to calm my wife had no positive effect. Her senses had never fooled her before.They told her we were diving and going to crash, and that was that.

I pointed to the AH. “Look at this instrument. See the horizon line and the clear blue sky above it? We’re the little airplane on the horizon line. See the wings level on the horizon? We’re flying straight and level. We’re not diving. Everything is okay.” She focused on the AH, glanced at me as if to say, “Are you telling me the truth?” I nodded. She looked back at the AH and seemed to relax a little.

Maybe if I had briefed them on what to expect during the flight and focused them on the AH to help keep them oriented, she might not have developed vertigo. But that had not occurred to me.

What else can I do to calm her? I made sure everyone was getting fresh air from the vents, and told them that we were nearing Columbus. To her great credit, my “copilot” daughter had remained calm during these frantic moments, and on her own initiative began a flow of comforting words to her mother and sister. It helped. But I could tell that panic was only a heartbeat away in the backseat.

Next decision. Should I divert to Port Columbus about ten minutes away or proceed to Cincinnati forty-five minutes away? In retrospect, I should have put them safely on the ground as soon as possible. With the weather improving from the west, we could probably have completed the flight that afternoon in VFR conditions or at least in “easy” IFR.

Focus on the attitude indicator, not the seat of your pants.

But I was still too focused on my Grand Plan.The sobbing had stopped. The air was smooth. There was no sign of ice. The airplane was functioning flawlessly. Maybe I could still show my family that private flying was reliable. We would arrive in Cincinnati on schedule despite the weather, and everyone would see that flying in the clouds was not so bad.

On we flew. But a better way to advance my Grand Plan would have been to change the day’s objective. Rather than trying to prove reliability, I should have switched to demonstrating versatility by diverting to Port Columbus.

This lesson was not lost on me several years later when my wife and I were one hour into a three-hour Cessna 210 flight from Hilton Head to Cincinnati on a bouncy spring day. After playing dodge-em with the build-ups and taking more lumps than I would have liked, she said she was getting “uncomfortable.” We were near Greenville-Spartanburg Airport, and that’s where we went like a duck to water. And to my wife’s delight, we spent the rest of the day and evening discovering the quaint little town of Greenville, South Carolina. In stark contrast to the 1973 Christmas flight, she fondly remembers the flight that introduced us to Greenville.

As we plowed on toward Cincinnati in the 1973 Arrow, I had enough sense to keep my passengers focused on the AH, update them on our position, and advise them of turns and descents before we made them. This and my “co-pilot’s” calming demeanor kept the backseat terror genie in its bottle. I was just plain lucky that no ice, turbulence or other problem showed up.

As we started the Lunken ILS approach, solid clouds gave way to broken with good ceiling and visibility underneath. Thank goodness. While the weather improvement was consistent with the forecast, forecasts have been known not to pan out. Going missed or even shooting the ILS to a low ceiling could easily have popped the lid off genie’s bottle.

We landed safely, but I immediately knew that my Grand Plan was in tatters. My wife had that “never again” expression on her face as we disembarked. If that was traveling by private plane, forget it. I had messed up big time, again.

My family flew with me after that ill-advised flight, but not with the avidness that I sought to engender. Maybe that would have been the case in any event, but clearly my Grand Plan would have been better served that winter day by diverting to Port Columbus or better yet enjoying another day of grandma’s Christmas cooking and flying home in VFR weather the next day.

Please understand. I’m not suggesting that you keep your family on the ground if there’s a cloud in the sky or if it’s going to be a little bumpy at low altitude. Or that you immediately make a precautionary landing every time a passenger raises an eyebrow. But having a terrified passenger is not good from anyone’s perspective. Take the long view when implementing your family-flying “Grand Plan,” especially if your mother-in-law is as good a cook as mine was.

Go or no go? Marginal VFR to New Hampshire
Scroll to top