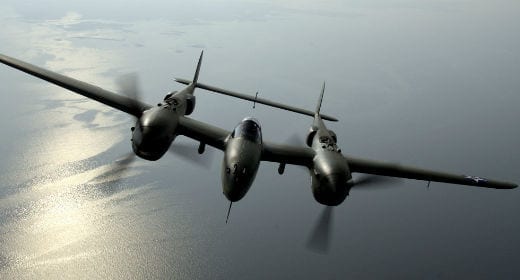 A World War II Fighter Group climbs out through 20,000 feet of thick English overcast without autopilot or radar assistance and with only an ADF for guidance to an on-top visual rendezvous over a radio beacon–a harrowing experience at best. The odds against your missing dinner that evening went up considerably if you happened to be the wingman on a leader whose instrument skills were…questionable.

Second Lieutenant Ted Seely of the Eighth Army Air Force’s 364th Fighter Group did not know he was about to have the ride of his life as he and his “element” leader taxied their twin-engine P-38 fighters into position at Station F-375 (Honington) in Sussex, northeast of London.

The panel of a P-38 – not the ideal instrument platform.

On that March 1944 morning, the ceiling was at smokestack level. Tops were about 20,000. Visibility was just enough for Ted to see the two P-38s ahead of them disappear into the ragged clouds as their gear was retracting.

The Group’s mission that day: Escort B-17s to the limit of the Group’s combat fuel range. The elements would take off one after another, climb in a line through the overcast on a precise course to the sunshine and proceed to the designated beacon where the elements would form four-plane “flights.” Four flights would join to form a Squadron, and the Squadrons (Ted’s 385th, the 384th and the 383rd) would form into the 364th Fighter Group. These 48 mean-looking airplanes with their distinctive twin booms, would then navigate to the rendezvous point with the B-17s and envelop them in its protective shield. Simple enough on the mission planners’ briefing paper. But the devil is in the details.

Two of the assumptions included in the “details” were that the element leaders were capable of flying on instruments for the several minutes necessary to reach the top. Another was that each wingman would fly welded-together formation on his leader. Maintaining visual contact with the leader in the muck was essential. Inattention by the wingman would result in his either losing sight of his leader or drifting into his leader’s plane. Both were chilling prospects.

A “successful” climb out, even in clear weather, was defined as making it to the top without a midair collision. Throw in thousands of feet of solid overcast, and the chances of having a successful climb out went way down.

The formation takeoff of Ted’s element was routine. The element was immediately swallowed into the belly of the beast where it was even darker and more difficult for Ted to see his leader than it had been in the mist at ground level. Ted kept his eyes glued on the P-38 slightly ahead and to his left, which happily was flying steady as a rock.

But very soon Ted was jockeying his throttles and maneuvering to stay in formation. His leader was not flying in the smooth manner prescribed for close formation IFR flight. The seat of Ted’s pants told him they were not in coordinated flight. He stole a glance at his needle-ball. Skidding.

He snapped his eyes back toward his leader’s plane. Still there. Another quick look at the needle-ball.  Now they were slipping. The altimeter and rate of climb or descent said they were climbing, but the power settings were not where they should be. What the….

Ted’s mind went into overdrive. Airspeed starting to deteriorate. Needle and ball swapping sides. Ted maneuvered like a juggler gone mad to stay with his leader.

He split his attention between his instruments and watching the leader. He could not afford to spend more than a split second at a time focused on either. There was no time to instrument scan. He had to loosen his vision and take them all in at once. He became impatient with the time it took his eyes to refocus as he went back and forth between his leader and his instruments.

His ADF needle was doing the hula. The DG followed along. He had been at this for only 15 seconds, but could already feel the sweat and mental fatigue. This could not go on very long.

The yoke felt light in his right hand, as he pushed the throttles forward with his left to keep up with the leader’s climb. The control column was getting mushy. Needle-ball said crossed ailerons and rudders. The P-38 began to shudder signaling an approaching stall. Spin recovery in the overcast would be…a challenge.

Just as the plane seemed ready to stall, Ted suddenly had to push the control column and his throttles full forward to stay with his leader, who must have finally understood the significance of his own plane’s shuddering.

The good news: the airspeed was increasing and the shuddering stopped. The bad news: the airspeed continued to increase and the G’s were building. It required a continually greater control column back pressure to stay with his leader, which further increased the G’s.

The P-38 Lightning was a speedy fighter, an unforgiving airplane for a graveyard spiral.

The altimeter was rapidly unwinding. The only question seemed to be whether the wings would come off before they hit another airplane or the ground. Ted would see the ground rushing toward him when they broke out of the bottom, but there would not be enough altitude to recover.

Your leader is going to kill you if you stay with him, Ted’s mind screamed. Do something…right now.

Ted broke right, instantly losing sight of his leader. He pushed the radio transmit button. “Breaking off. See you on top.” No reply.

He regained control of his airplane. Even though he had narrowly avoided disaster, he was still in danger. He turned toward the beacon and started climbing. The ADF needle told him he was far off course. That would be good if his element was the only one having trouble on the climb out, which he doubted. There was a good chance that at any second the gray void would be brilliantly illuminated by his collision with another P-38. He forced himself to stay on the gauges, but allowed frequent peeks in a futile effort to see through the grayness.

By some miracle, he made it to the sunshine without incident and joined the merry-go-round of P-38s over the beacon at his assigned altitude. The kindest word to describe the scene was chaos. The orderly grand plan had disintegrated. P-38s, some in small clusters, some alone, were milling about all around him.

He did not expect to see his leader in this world again. As he circled looking for the other element of his flight, he began to wonder what he would say at the post-mission debrief about his leader’s failure to return to base. He would have to say something, but what? The truth? Probably not. The poor guy was dead. He didn’t need “World’s Worst Instrument Pilot” as his epitaph.

Suddenly Ted saw his leader’s plane pop up through the wispy white and rise to Ted’s altitude. He could hardly believe his eyes. A great sense of relief washed through him. He sidled into formation and looked across the few feet to the other cockpit. The pilot looked over at him and nodded. That was all. He just nodded.

They found the other element of their flight. The Squadrons formed up in a rag-tag Group and flew the mission. Neither Ted nor his leader made any mention at the debriefing, or to each other, of the wild ride that almost killed them.

How did the guy survive after Ted broke off? Ted often wondered after the mission. Maybe he had been distracted by the nearness of Ted’s airplane. Maybe he could do a better job of instrument flying with Ted gone.

But Ted Seely, my neighbor in Hilton Head, South Carolina, some 70 years later, never learned the answer. His leader took the answer with him into a smoking crater soon after their hair-raising experience, when he went straight in at the end of a dive from high altitude.

One of the drawbacks of the P-38 model they flew was its propensity to quickly accelerate to near the speed of sound in a dive that started at high altitude. The controls would “freeze” and the plane, not having dive brakes, would continue its embrace with gravity despite all efforts to recover. It was only after the plane had plunged to about 10,000 feet that the air became dense enough to raise the speed of sound, and correspondingly reduce the airplane’s airspeed relative to it, sufficiently to “unfreeze” the controls. This would allow the pilot to recover if, in the short time remaining to him, he ever so gently, usually with the elevator trim, raised the nose to level flight without tearing the wings off or impacting the ground. Some accomplished this feat. Many, like Ted’s leader, did not.

There were many ways to die in the WWII European skies, as is true for any place in any war. Only a few of those ways required the assistance of the Luftwaffe. According to Wing records, only 33 of the 95 pilots who matriculated through Ted’s Squadron completed their combat tours. The others for various reasons did not.

We are indebted to all veterans who put themselves in harm’s way for our county, especially to those who went out and did not return… whatever the reason.

To grandmother’s house we go or no go?
Scroll to top