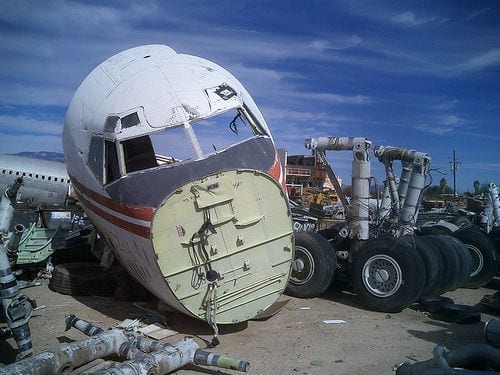 We have had the debate on pilot age and it goes on. Review that article and add your comment. For this one we are talking about airplanes.

The last year in which a lot of airplanes were built was 1979. There was big production in the few years before that and if memory serves me, the last time production numbers were as low as they have been recently was 1952.

The result of this is that the great majority of the fleet is 33 years old or older. So when considering used airplanes, most are old. The good thing about this is that the asking prices are quite low when compared with new airplanes. The bad news is that the maintenance costs will be in relation to the value of the new airplane, not the old one. A friend put over $30,000 into routine maintenance over 12 months. His airplane is an old light twin, probably worth only about five times as much as that shop bill.

When is an airplane too old to fly?

Other factors to consider include the age of the airplane. Some contend that airplanes never wear out but that is true only if you have an unlimited amount of money to spend on them. The USAF B-52 and KC-135 fleets come to mind. The DC-3 too. They are seriously old. I doubt if you can fine many, or even any, pilots flying these airplanes that are not a lot younger than the airplanes themselves.

The USAF has spent lavishly on keeping B-52s and KC-135s airworthy and up to date because it could. The airplane boneyards are full of old airline and business jets that were retired because they were no longer viable. This is often because the engines fitted were real gas guzzlers and the scrap heap made more sense than an expensive engine retrofit.

That is not true of piston airplanes. If anything, the older airplanes are as or more fuel efficient than the new ones because of the use of turbochargers and high cruise power settings on the more sophisticated new piston airplanes. When I was flying a Cessna 400 I was amazed at the high fuel flow when operating in the go-fast mode.

I think that most of the airframe (wings, fuselage and tail) will last a long time if corrosion is properly managed. The airframe accounts for only about a quarter of the total airplane when it comes to manufacturing cost and it probably accounts for even less of the maintenance cost.

The big money for maintenance goes into the engine and the systems. Over the years this goes up a lot in terms of dollars and by even more in relation to the value of the airplane.

The cost and complexity of keeping an old airplane going are made more difficult because of parts. Most of the older airplanes built by companies still in business are reasonably well supported but you do hear some horror stories about parts for them. Parts are also quite expensive.

Most accessories are available only as rebuilt units and this is fraught with peril.

To rebuild things shops must be FAA approved. That, though, guarantees very little. Some do a really sloppy job of rebuilding systems and accessories. The result is that you have to be really careful when using these items. If an owner or shop doesn’t have personal knowledge of the ability and integrity of a rebuilder, all manner of strange things can happen to those parts with the magical FAA approval.

Before getting to some questions for debate, the question of risk v. airplane age has to be addressed. In general is there more exposure to risk when flying around in older airplanes?

I have done research on this a number of times and there are no clear-cut answers. There is just no way to know the relationship of hours flown between new and older airplanes so nothing can be quantified about accident rates.

Accidents are a matter of record, though, and the incidence of mechanically-related accidents in older airplanes has always been higher than in newer ones. Poor or inadequate maintenance is often cited as a cause, especially in older airplanes.

My feeling on this subject is clearly illustrated by the fact that after flying my P210 for 8,963.44 hours in 28 years, five months and 13 days, I retired the airplane and sold it for scrap. I felt like the airplane was worn out and the risk of flying it was increasing.

That was a complicated pressurized airplane. A simpler regular 210 would have been a different matter. If I had had one of those, and the old dude flying it had been ten years younger, I’d have probably flown it for at least ten more years.

So what do you think? Will our fleet of older airplanes fly on for five more years? Ten? Forever? Will airplanes be euthanized because of calendar age, flying time or burgeoning expensive maintenance requirements? Do you feel as comfortable about mechanical reliability in an older airplane as in a newer one? Your turn.

Going out on top
28 replies

Ohio to Alaska by Swift
Scroll to top