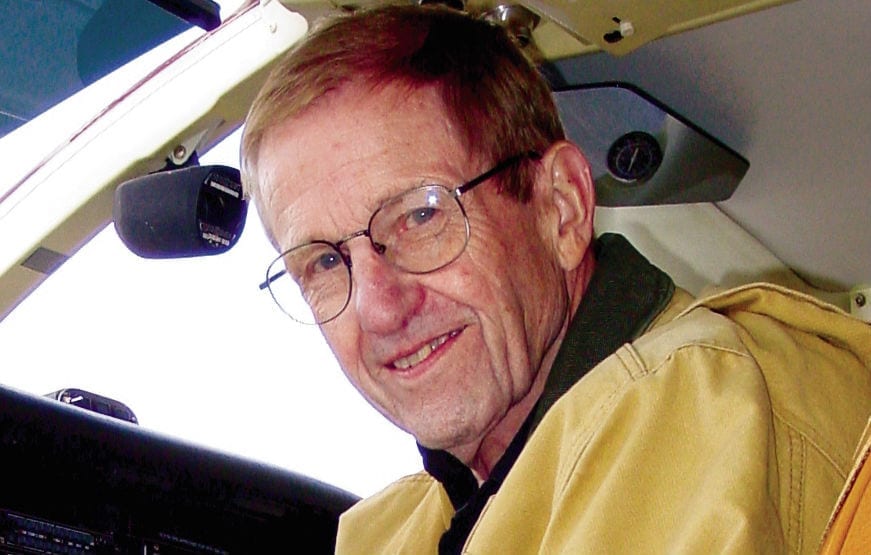 This post is an excerpt from Collins’s book The Next Hour. In this section, he explains why he decided to give up flying at age 74–on his own terms. In the debate about aging pilots, Collins’s unique perspective is a valuable contribution. The complete book is available from Sporty’s Pilot Shop. –Ed.

When we say that it is up to the pilot to decide whether or not he feels like flying, that relates to physical and mental well-being as well as to age. When do we get too old to fly?

I have flown with and had complete knowledge of pilots from the age of 17 to 74. That would be just one pilot, me. It was an interesting airplane ride and, as of this writing, I still have a valid medical certificate. I could go out and fly six approaches, do some navigating, and fly holding patterns and I would be current for instrument flying. In fact, I did reserve an airplane and instructor to go out and do that but then canceled that and reserved an airplane and instructor for a future trip. Then I didn’t fly the trip.

I didn’t fly enough over the last year of flying to feel really comfortable with IFR flying. The last IFR in IMC trip that I flew went well and that is the way I wanted to leave it.

That trip, flown in a Columbia (now Cessna Corvalis) 400 was from Hagerstown, Maryland, to Asheville, North Carolina, and return. The weather was good for the trip to Asheville, but for the return a front was coming up on the route. I started off at 11,000, usually too high for me without oxygen but I didn’t have the apparatus to deal with the built-in oxygen system and the air was smooth at that altitude.

When the clouds built up over 11,000, it didn’t matter. Without oxygen, I couldn’t go higher to stay on top so I descended to a more breathable 7,000 feet. The cumulus clouds were congested and there was no way to avoid poking through them almost continuously. The ride was rough, with things moving about in the cabin occasionally, but the Garmin GFC700 autopilot was doing a fine job of flying and the 400 is quite a good ride in turbulence.

From afar I could see on the Nexrad some showers building near Hagerstown and as I got closer it was clear that the GPS approach to runway 9 would be through a rain squall. No lightning was displayed. The ride was, well, squally, but no worse than it had been en route. I was out of the squall before I got to the airport and the landing was in a strong crosswind, which is something else the 400 does quite well.

The next thing I decided was that I’m getting too old for such and would plan future trips only on clear days. No more rain squalls. I did that a few times and then, on 7/15/2008, I flew a clear day round trip to Batavia, Ohio, home of Sporty’s. When I got home, I informed myself that this was a good time to stop flying as pilot in command. I had always said that I would make that decision after the completion of a well-flown trip and this one, in the 400, met that requirement.

One reason for me to stop with satisfaction was that limiting flights to good weather took all the challenge and fun out of my flying. To me, dealing with inclement weather in light airplanes is one of the most interesting things that a pilot can do. If not done correctly it can be lethal but done correctly it is fascinating and rewarding. Poking around the innards of a weather system will teach you things about weather that you simply can’t learn anywhere else.

The downside to weather flying is that it is something that has to be done on a regular basis if the knowledge and proficiency to minimize risk is to be maintained. In my busiest years working for Flying, I flew 500-600 hours a year. That was for about seven years. Then I dropped below 500 a year but stayed above 300 for a long time. That was all good but when I dropped below 100 hours a year I lost the feeling that I was immersed in weather flying and that was the spell that flying had on me. Doing battle with the elements did the same thing for me that aerobatic flying does for some pilots, or that just flying around on pretty days does for others.

I felt like my reflexes and thought processes were as good as ever but my glasses were getting thicker and it took some accommodation to see everything that I needed to see. My vision was 20-15 for years and that was what I was used to. I could still hop in and out of airplanes with some ease so the creaky joints were not a big factor.

Doing battle with Mother Nature is the most rewarding part of flying for Collins.

Another consideration was my father’s experience. He flew a few months past his 75th birthday, flying a Piper PA-40 Arapaho that belonged to Piper and that he used in his role as a consultant to that company. (The airplane was certified but only a few were built and none were sold to the general public.) One day, after landing, he inadvertently retracted the landing gear. I didn’t want to end that way so I thought I would stop flying a few months earlier than he did.

I was always interested in how I became more conservative the longer I flew. Except for perhaps the first year or so, I never did reckless or foolish things in airplanes. From age 40 to 50 I flew a lot, my weather knowledge was at its peak, and flying was something that I did easily and naturally. As I morphed into my 60s and 70s I didn’t fly as much and could feel things slipping slowly away.

The last time I thought through this I was interested in the fact that younger pilots have more to lose but older pilots, who have less time left to lose, tend to be more conservative. In my case, though, it was the lower level of activity that caused me to back off.

One trip stands out in relation to age. It was on my 51st birthday, in my P210, from Huntington, West Virginia, to Trenton, New Jersey.

There was an active front along the way and a terrific tailwind was available in the high teens but the air there was so rough that I descended down out of the wildest of the shear turbulence. Night fell soon after I started.

The airplane still had a Cessna autopilot (I later got an S-Tec) that didn’t work so I had to hand fly all the way. The turbulence was still substantial and it was a pretty tough two and a half hours with over an hour and a half of it in bumpy clouds.

As I flew along I wondered if I was getting too old for this. I convinced myself that I wasn’t and that it was a perfectly normal thing for me to do. I was hand flying at night, over mountains most of the way, and the airplane was lurching along in bumpy clouds. There was nothing there that I hadn’t done many times before and wouldn’t do in the future but, faced with the same flight 15 years later, I would have probably gone to the Holiday Inn in Huntington and flown home the next day.

Only about 12,500 pilots in the United States have current medical certificates after they are 75 years old. I am one of them. That doesn’t define anything other than the fact that those pilots are lucky to be able to still fly if they want to. Good genes, too. Thanks Pop.

The Great Debate: an accident waiting to happen
73 replies

The Weather Geek: occlusions, a bad time to fly
Scroll to top