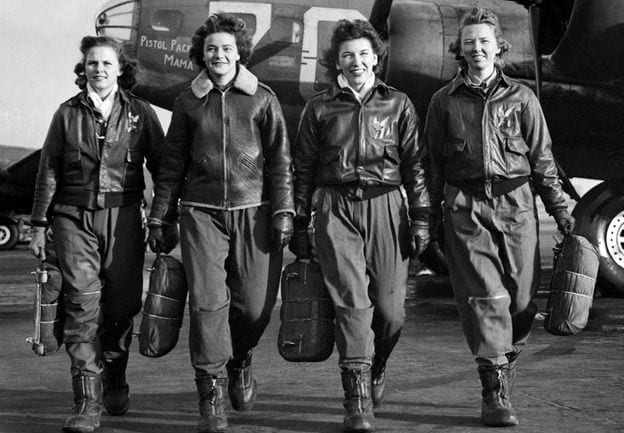 There is no question who is winning.  Male pilots outnumber females by a commanding 94 to six margin, plus or minus a little. This is true of pilots in general as well as airline pilots.

When my friend Bonnie Tiburzi became the first female to be hired by a major U. S. airline (American) I thought maybe that would mark the beginning of a big change. It was a start but females only got up to that six percent of the total in airline flying.

Everyone acknowledges that we are facing a dwindling and aging pilot population with more falling out than are coming in. It is sort of like a minister who does more funerals than christenings. Draw the line out and it eventually gets to zero. Could it be that getting more females involved could reverse this trend?

The WASPs flew almost just about every airplane during WWII.

Why hasn’t aviation attracted more females? Certainly in my years in the magazine business we went out of our way to encourage females. One way this was done was by glorifying their exploits. A long flight flown by a female would be a record; the same by a male would be a ferry flight.

I often wondered if some of those “record” flights were worthy of note. In most cases, all they proved was that the pilot stayed awake and the engine ran the whole time. Maybe all they were really good for was the personal celebrity of the pilot flying. We’ll never know whether or not this activity encouraged any females to learn to fly.

Is there some stigma to being a female pilot? Some male chauvinist pigs referred to WW-II Wasps (Women Airforce Service Pilots) as “leather ladies.” They were a tough bunch, though, and couldn’t have cared less about male attitudes as they flew every airplane in the inventory all over the world.

Where all the flight training of WW-II flooded the pilot ranks with males, almost a half a million of them, there were just over 1,000 Wasps. No big percentage there.

I used to judge in an instrument flying contest sponsored by Sporty’s and FLYING at the National Intercollegiate Flying Association air meet. The contest involved a for-real instrument flight and, hands down, the best pilot I ever flew with there was a female, Lauri Laushkin, a student at Mount San Antonio College. The weather was low IFR and she flew a virtually perfect flight.

I have always thought that females can be better pilots than males. I think they take fewer chances and treat airplanes more gently. The personality traits that lead to accidents are mostly male but maybe that is because males are so predominant that there is little female influence on accident statistics.

Could it be that females are not attracted in number because they take one look at male pilots and think, “Yuk, I don’t want to be like that.”

It is my opinion that we males have created a fraternal bond in flying that largely excludes females. If so, how do we change that so more females will feel welcome as general aviation, airline or military pilots? None of the past efforts have helped. What do you think would help? Or do you think we should work to keep this wonderful activity a boy’s club?

The Great Debate: are great pilots born or made?
88 replies

My night from hell

Mnemonic Devices: words to fly by
Scroll to top