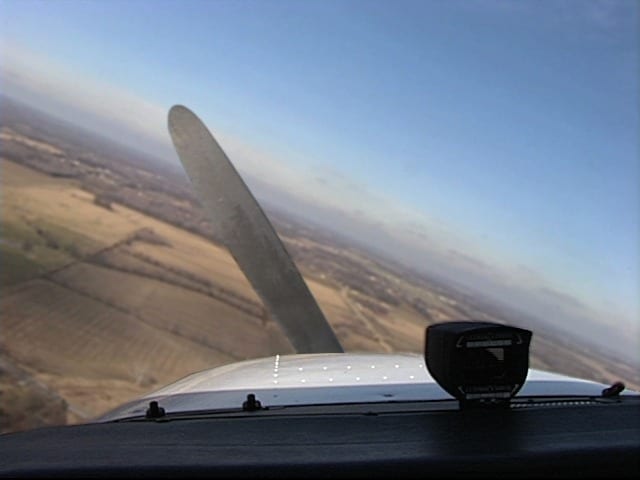 This article is taken from Phil Scott’s new book Then and Now: How Airplanes Got That Way, available now from Sporty’s Pilot Shop. -Ed.

Back during the Paleozoic Era when I first learned to fly, I developed a mental block about which altitude you’re supposed to cruise at while flying cross-country: you know, fly east at odd-thousand feet plus 500 when VFR, or at even-thousand feet plus 500 when headed west. See, flying my first dual cross-country to an airport toward eastern Kansas, somehow I ended up at the wrong altitude. My first instructor out of, I’ve forgotten, maybe 20 or so, clarified things a little by leaning over and shouting above the roar of the Cessna 152’s mighty engine, “You know how people back East are a little strange?” I nodded, even though I didn’t know any Easterners at the time. “Here’s how you remember it,” he screamed. “Oddballs go east.” Within a couple of months I got a job in New York and I have remained there 25 years so far. Yes, I was that oddball going east.

Who can forget how much there is to remember piloting an airplane? FARs, cockpit procedures, and a bunch of other stuff I can’t recall right now. To make it worse, after age 26, the brain starts shrinking to the tune of two grams of tissue each year. Sometimes I’m just happy to remember to put on socks in the morning. Luckily for pilots, there were the ancient Greeks. Those people had prodigious memories; even a blind guy like Homer could compose the Iliad and The Odyssey and carry it around in his head. We’re talking nearly 1,000 pages packed with names like Ericthonios (who was the son of Dardanos, but everybody remembers that). Homer never flew, of course, largely because he was blind, but also because the Greeks didn’t have airplanes then. Yeah, that might have been a factor. He remembered it all due to mnemonics, Greek for “memory.” Don’t confuse it with pneumonics, which has something to do with lungs. I’m not a doctor, so I don’t have to remember exactly what.

Mnemonics are easy-to-remember devices, acronyms, phrases, whatever, that help you recall information. That first instructor—I wish I could remember his name—passed out mnemonics like a new father handed out cigars back when second-hand smoke didn’t kill a person. Like, every time I shut down the 152 he’d repeat, “Mixture, mags, master.” I mean, every frakking time. After the first 20 hours, I wanted to pound his head against the master switch. But at least I never had to refer to the checklist when I shut down the engine, even after I soloed. Even today. Sometimes I say it while I’m turning off the car.

What was that engine failure checklist again?

Another mnemonic that this instructor—I think his name was Mark—used to say whenever he pulled off the power was “Glass, gas, grass”: Check the instruments (behind Glass), check fuel gauges (self-explanatory), check for a place to set down (in Kansas those acres of wheat all look like Grass—even to us oddballs going east). At the time I thought it would just be easier on everyone involved if Mark remembered to keep his grubby fingers off the throttle.

Before we even fired up the Cessna, he said to remember ARROW for all the stuff we had to carry on board: Airworthiness certificate, Registration, Radio station license (even though you didn’t need the license for domestic flight), Operating manual, and Weight and balance chart. Before takeoff he had CIGAR: Controls, Instruments, Gas, Altimeter and Run-up; and a cigar’s traditional suffix, TIP: Trim (set for takeoff), Interior (doors shut, seatbelts latched), and Prop (for complex aircraft—but make sure it’s spinning anyway). As soon as we were airborne and heading on the downwind leg for a touch-and-go, he’d say “GUMP”: Gas, Undercarriage, Mixture, Prop. That was a tough mnemonic to remember; at that time, Forrest Gump was merely a twinkle in Tom Hanks’s eye.

When I took my instrument training, my CFII made me memorize CRAFT (Cleared, Route, Altitude, departure Frequency, Transponder); and en route to terminal, I had to recall WIRE: Weather, Instruments, Radios, En route. For a missed approach he made me add MATH to that: Missed, Altitude, Time, Heading.

Those are all examples of what memory experts call peg words—a list of initials that construct a word. So if the alliterative “mixture, mags, master” is too confusing (almost immediately after getting my sign-off I started mixing up “master” and “mags”), dieting pilots might feast on SLIM: Switches (off), Lean mixture, Ignition (turn off and remove key), Master (off). For hungry pilots there’s BLT: Boost pump, Lights, Transponder. Likewise Hollywood types might say “Lights! Camera! [transponder] Action! [throttle]”

The best mnemonics connect what you’re doing with what you’re trying to remember. Instead of Mark’s “glass, gas, grass” when the engine dies, another instructor, Joe Castanza (whose last name I remember because it’s like Seinfeld’s George Castanza—Can’t stand ya!) told me to GLIDE: Glide speed, Landing spot, Identify problem and remedy it if possible, Discuss the situation (namely screaming “Mayday!” into the radio and squawking 7700), and Emergency checklist, which you should run through if there’s time. Sorry Joe, “glass, gas, grass” is easier.

Not all mnemonic devices can be printed in a family magazine, though at times they’re the best ones. One pre-takeoff checklist—from the Sam Houston Institute of Technology—reminds you to turn on the Strobe light, set Heading indicator, check engine Instruments, and switch Transponder to alt. And for the old-style navigation radios, it’s Tune, Identify, Twist (for VORs) or Test (for ADFs). The best I heard came from a pilot flying a Britten-Norman Islander, which was climbing out with nine parachutists aboard when an engine died. Trapped at the controls, this pilot actually shouted the mnemonic while skydivers abandoned ship out the door. Back safely on the ground, he explained to them that it meant Firewall everything, Undercarriage Up, Check which engine had failed, and Kill it.

“What about the second word?” a skydiver asked.

Still, nothing beats a checklist. Flying a Warrior on New Year’s Day, I found myself thinking “Gear, Undercarriage, Mixture, Prop,” which is both repetitive and redundant, plus I forgot to switch fuel tanks. But at least I really, really knew that the fixed gear was probably out there somewhere, wheels and all. A commercial pilot told me the greatest mnemonic device he knows is “Whoop! Whoop! Pull up! Pull up!” That’s his airliner’s ground-proximity warning system. Sometimes it’s best to leave the mnemonic devices for writtens, emergencies and simple aircraft—unless you concoct a mnemonic to remind your empty brain to use a checklist.

Wait…Empty…MT…Mark Tidd—that was the instructor’s name. See, all along I had a mnemonic device for it.

Why do we do it?
Scroll to top