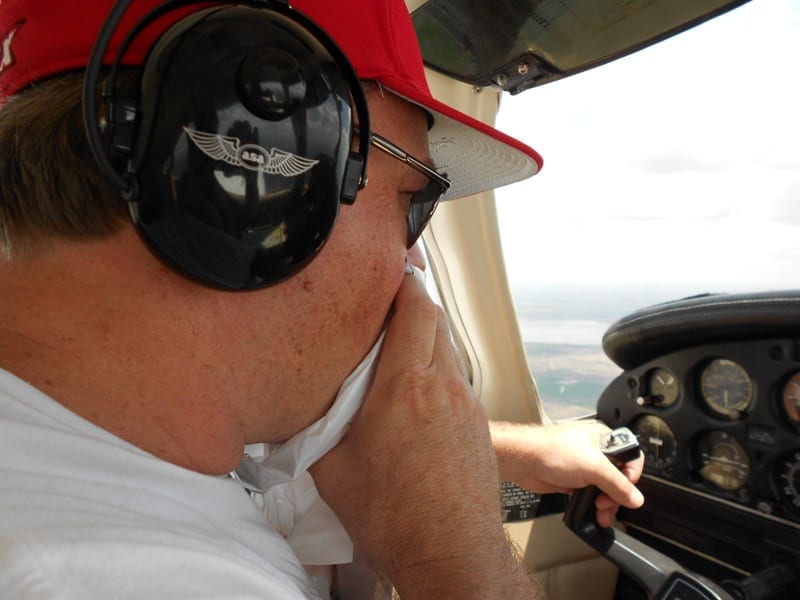 As I made my approach into 14 at Pearland Regional Airport (Houston, Texas), the wind was calm, but the turbulence was beating me up pretty bad. The temperature was in the triple digits and the thermals were doing all they could to challenge my internal fortitude. My inner ear was telling me to get the plane on the ground and my stomach was seconding the motion. My palms were sweating, I had an uncontrollable urge to wipe my face, and I wasn’t in a talkative mood. I was displaying all of the classic signs of motion sickness.

Flying is worth it.

Like other pilots with this condition, I pushed through the turbulence, focused on the landing, and had a nice touchdown just past the numbers. As soon as I cleared the runway, I opened the small storm window on the Warrior but the air outside was just as hot and thick as that in the plane. Relief would have to wait until I made my way into the FBO.

My experience that day at Pearland wasn’t all that unusual. The southeast Texas sun can be brutal in the summer. Temperatures regularly exceed one hundred degrees, the humidity makes the air thick as soup, and the thermals can make for a long day in a general aviation airplane. During the summer months I prefer to fly in the evening hours. The setting sun provides some relief from the heat and the thermals are much less violent.

As you may have noticed, I have a propensity for motion sickness. I have tried all sorts of remedies, everything from eating special foods before flying to acupressure wrist bands. Some things work better than others, but so far I have found no real solution. After my very first flight lesson, I bought a stack of motion sickness bags from the local pilot shop and, to be honest, have put several of them to use. After my first “incident” with my CFI, he couldn’t get out of the plane fast enough. I can’t say that I blame him. When we met in the FBO after the lesson, he just shook his head and asked if I was sure I wanted to do this to myself.

I have had several friends and family members ask me the same thing. Folks think I am crazy to put myself through such misery just to fly an airplane. The truth of the matter is that I would go through much worse to fly an airplane. Flying has become a passion of mine and it isn’t something I will give up easily.

My first flight with a passenger after passing my checkride was in late July. I had the bright idea of bringing my wife to 11R (Brenham, Texas) for a nice lunch at a neat little 1950s-themed diner on the field. We had departed Pearland early enough that the thermals hadn’t kicked into high gear, so the trip to Brenham was very pleasant.

Things heat up quickly this time of year and by the time we finished lunch, and headed back to home base, there was a significant amount of vertical air movement. To find relief, I climbed to 7,500 feet, just above the clouds. The higher altitude gave us not only smoother air but much lower temps. The trip was smooth for the majority of the 45 minute flight. As we got closer to the field, I decided to drop altitude to avoid the Houston Hobby Class Bravo airspace. That’s when the fun started. Let’s just say that it didn’t take long for me to regret taking on the $100 hamburger.

I had no problem safely flying the plane and my wife thought it was a good opportunity to snap a very candid picture of her macho pilot. I wasn’t feeling very macho at the moment and was happy when I finally touched solid ground.

I can’t help but believe there are other pilots who put up with such misery just to fly an airplane. I suspect that a good number of pilots have persevered through some sort of adversity to achieve their gift of flight. Sure, there may be some out there who had to set the dream aside because of a medical condition, and I can’t really blame them. I do have to wonder though, why do we do it? Why spend so much effort, time, and money learning how to do something that makes us broke, tired, and miserable?

To the uninitiated, it’s hard to answer these questions. Believe me, I have tried. That being said, I think there is something unique about aviators that drive us to be in the air. We will do whatever it takes to break the bonds of gravity. Not enough cash in the flying fund? We rent the 152 instead of the 172. Too hot? We pick up an extra bottle of water. Too bumpy? No problem, we bring extra sick sacks (much to the chagrin of our flying buddies).

During my checkride, I explained my “condition” to the DPE and he hardly flinched. He said we would go straight and level after each maneuver so that I could recover and be at my best for the next task. I got the impression from the DPE that I wasn’t the first checkride candidate to deal with motion sickness. Having this impression somehow made me feel better about my plight. The checkride turned out better than expected. My motion sickness was kept at a manageable level and best of all I exhibited the skills required to become a private pilot!

Motion sickness is just something I have to deal with. Though I do factor it in when making my go/no-go decision, I refuse to let it keep me out of the skies. It doesn’t take much of a thermal to have me prepping the little white bag, so my flights are not always a pleasant experience. At least that’s what my stomach is telling me. My spirit, and flying soul, well they tell me something completely different.

Going out on top
26 replies

Mnemonic Devices: words to fly by