Blog - Latest News
You are here: Home1 / Article Archive2 / History3 / My time machine: a trip to a WWII training ground 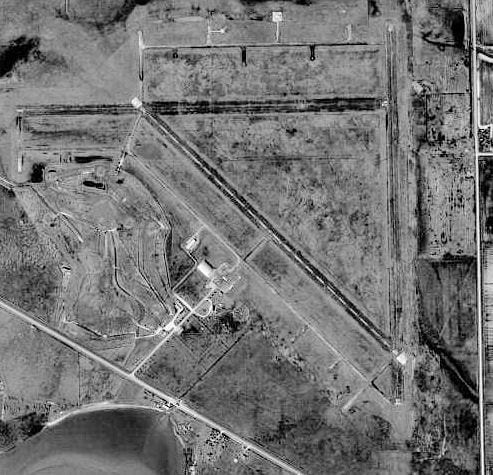 This article was written by an Air Facts reader. To learn how you can submit an article, click here.

Joining the pattern was as easy as pie. The only other plane in the area was a single- engine Mooney which was departing south towards Tres Palacios Bay. I crossed mid- field, announced my intentions, and entered the pattern on the 45 for runway 13. Runway 13 is an expansive 5000 feet long and 150 feet wide. More than enough needed for my rented 1985 Piper Warrior. More than enough indeed, after all, this airfield wasn’t built for my Warrior but rather for a warrior of another type.

Palacios Airport in the mid-1990s.

Palacios Municipal Airport, formerly known as Palacios Army Field (AAF), was built in 1942 for the purpose of training pilots who were destined for battle in World War II. The airfield was an addition to Camp Hulen, which was used to train the National Guard on the tactics of anti-aircraft fire. Once the war effort hit high gear, Camp Hulen’s airstrips were quickly outdated. The new Palacios AAF was designed with three 5,000-foot runways, all of which are still intact today. Runway 13/31 is the primary and is in good condition while runways 8/26 and 17/35 are only in fair condition.

While planning my trip to Palacios, after a quick weather check, I planned for an arrival on runway 17. The winds were coming directly off the Gulf of Mexico at 170 degrees and I thought how perfect the landing would be. Being a stranger to this airfield, I asked a local pilot if he had any experience at the field and told him of my plans to use runway 17. “Oh no” he said. “The last airplane to use that runway was probably a B-34.”

The local explained to me that the primary runways in use were 13/31. Upon arrival I quickly found out exactly what the local pilot was talking about. Runway 17/35 was just as long, straight, and flat as the other runways but it has grass almost a foot high growing through the cracks of the cement. I think there were still black touchdown marks laid down in 1942 by one of the B-34s that once roamed the mid-Texas coastal sky.

After landing I taxied to the FBO which consisted of an off shore helicopter hangar, a self-serve fuel pump, a small pilot shack with a few chairs, a rest room (with a shower!) and a field sign-in log. My trip was in March so the wind was crisp and the breeze was constant. The sound of my fellow pilot in the Mooney was long gone and I was left in eerie silence with a faint sound in the distance of P-47s and B-34s that once buzzed these WWII skies.

Given the size of the airfield, it is no wonder I could still hear the past. At the height of the war effort, more than 14,500 troops called Palacios home. Though the airfield is very large it was still hard to imagine the base being full of fighter planes, bombers, and thousands of trainees and support crews.

Palacios is approximately 100 miles southwest of Houston. Unlike Houston, Palacios doesn’t have a lot of industry to draw residents and visitors, but it does have wonderful year round fishing, great dove hunting in the fall, and some of the best waterfowl hunting in Southeast Texas. A quick peek at the field’s logbook, which I couldn’t help but sign, showed that the majority of arrivals were for hunting or fishing.

Palacios Airfield as depicted on a 1941 sectional (courtesy of Paul Freeman).

The hustle and bustle of an active army airfield has given way to a municipal airport full of solitude and serenity. This was apparent as I stood alone on the ramp next to the fuel pump. My thoughts ran wild imagining what this airfield once looked like. More that 2,800 tents and 400 permanent buildings once consumed the empty fields surrounding these runways.

Unfortunately my imagination is all I really have to help me understand how this place once looked. Palacios, like many other US Airfields of WWII, doesn’t have a significant amount of historical information available. Old charts and a few references in local historical documents are all that remain to tell the airfield’s story.

As an American I am extremely grateful to the men and women who trained at the Palacios Army Airfield and as a pilot I am very thankful for the airstrips they left behind. The longevity of the runways is a testament to the quality work produced during the war years, and a reminder of the effort given by all who served.

Visiting Palacios was like taking a trip back in time, a trip well worth the hour flight from my home airport near Houston. Before visiting Palacios I never knew my little rental plane could be such an effective time machine. Don’t tell the owner or the hourly rate might go up!

The sun was getting low in the sky and I had to head back to Houston before it got dark. I hopped into my time machine and headed northeast. On the way home I passed over an airfield where one of Howard Hughes’ hidden gems is stored in an unassuming hangar, but that is a story for another time.

Land of the midnight sun

Landing on I-80
Scroll to top