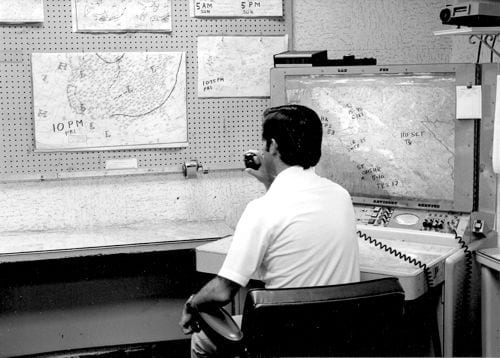 A relatively new instrument pilot asked me recently how to open a flight plan via Flight Service. After stammering for a moment, it hit me: I haven’t called Flight Service in over 5 years.

Back when Flight Watch was the only option.

Initially, I was embarrassed by my lack of knowledge. After all, what does it say about me as a reasonably-experienced pilot that I never call Flight Service? Surely, this pilot will never ask me another question about IFR flying.

But after about two minutes of reflection, that guilt quickly faded. I don’t call Flight Service because I don’t need Flight Service. In fact, I think I’m getting more pre-flight weather information without calling 1.800.WXBRIEF than ever before. A recent trip is a perfect example. Before the flight, I looked  at the following: numerous radar pictures (local/national, base/composite reflectivity, with/without echo tops), plain English METARs and TAFs, minutes-old PIREPs, graphical icing forecasts and a whole lot more. And this was all using free websites!

The U.S. government is Flight Service’s worst enemy, as a quick visit to the comprehensive AviationWeather.gov website makes clear. Beyond this site, there are dozens of great resources for pilots, from basic and free to sophisticated and expensive. Prefer to look at weather on your fancy new iPad or iPhone? There is a vibrant community of developers who are creating some truly great apps for pre-flight weather briefing (see ForeFlight, WingX, Garmin Pilot My-Cast, etc.). Many of these are also free, and none are more than $100/year–including full IFR charts.

When it’s time to file a flight plan, a few keystrokes on FltPlan.com shows me not just my time en route (with frightening accuracy, I might add), but also the exact clearance ATC gave to the last 5 airplanes who flew this route. No more guessing and no wasted time with IFR En Route charts. Then I simply click a button and it’s filed. In over 4 years of using the site, I’ve never had a flight plan not get filed.

Of course you need internet access to do all this, but that’s hardly a limitation in 2011–it’s cheaper and easier than ever. From the ever-present mobile phone in every pocket to WiFi in every Starbucks, getting dependable internet access just isn’t hard anymore. I plan many of my FBO stops based on WiFi availability, not fancy buildings. Picking up the phone just seems so… old fashioned.

I can hear some pilots saying, “But what about using Flight Service for in-flight briefings?” When it comes to in-flight weather, the widespread adoption of datalink weather has made Flight Watch a last resort for most pilots. I firmly believe that if you can afford to fly IFR, you can afford datalink weather (at least a portable XM Weather receiver). It’s a smart investment for a renter or an owner, and I would give up my headset before I would give up my Garmin. In any case, the imminent availability of free datalink weather via ADS-B (it’s already available in many places right now) will really make Flight Watch redundant.

Given this new reality, I vote to eliminate Fight Service, or at least in its current form. Maybe we need some skeleton infrastructure for international flights where all you have is a pay phone in an airport shack. But other than that, let’s admit what most of us already know–Flight Service is a leftover from the 70s that deserves to go the way of brown shag carpets and the Pinto.

Some will protest that Flight Service is free. For this crowd, I respectfully direct your attention to your tax return next April. It is not and never has been free. Our return on investment for FSS is terrible. Indeed, for me, it’s absolutely zero.

So let’s take all that money we spend on FSS (nearly $2 billion over 10 years) and just buy every pilot a Garmin GPS with XM Weather. I think it would do more for safety, and for less money.

A date with Juliet
Scroll to top