Blog - Latest News
You are here: Home1 / Article Archive2 / I was there3 / Lost in the smog 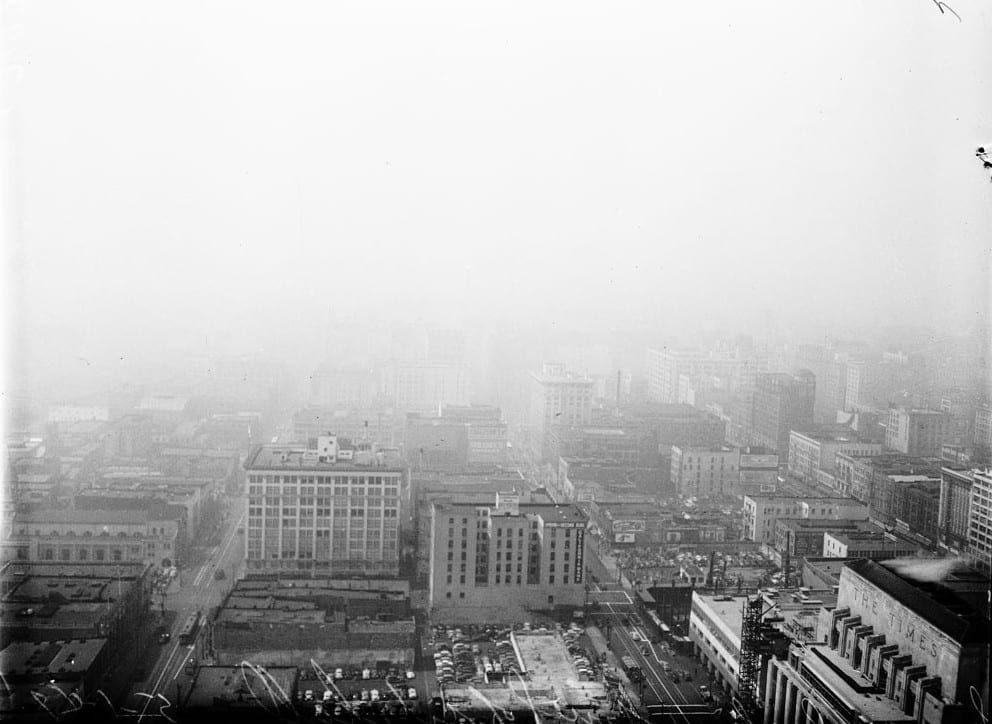 In September of 2010, my wife and I checked out our flying club’s 2005 Cessna 172SP/NAV III for a weeklong trip from our home in Corvallis, Oregon, to the San Francisco Bay area to visit our daughter and her family. From there we went on to Southern California to visit more relatives. The last leg of our IFR/TEC route south took us from our lunch stop in San Luis Obispo (KSBP), over Santa Barbara, Ventura, Burbank, El Monte, Seal Beach, and then southeast along the coast to Gillespie Field (KSEE) in El Cajon.

It’s much easier with a Garmin G1000 panel to guide you.

Although I was raised there, it had been over 50 years since I had flown in and around the Los Angeles basin and it had been since never that I had flown a TEC route. A bit of focused study (well, ok, a lot of focused study) of the back pages of the little green A/FD for the Southwest made it seem likely that we should request, and would probably be assigned, the route designated and described as SBAN62, which my wife programmed into the G1000 before we contacted Ground Control. Sure enough, we were cleared from KSBP to KSEE via SBAN62 and, after an uneventful departure and a few vectors from Santa Barbara Approach, we were on our way.

It was a lovely day; the Los Angeles Basin was as clear as it could possibly be and the scenery was spectacular—Los Angeles looks a lot more benign from 9000 feet than it does from the ground. As the GPS and the autopilot guided us precisely along our assigned TEC route, I was reminded of an experience I had had here many years ago while earning my private pilot certificate in a taildragger that was equipped with a suite of avionics much different than was the airplane we were flying. If you’ve flown with, or even just glanced at, a G1000 panel you know that it looks like something out of Star Wars. The panel of the 7EC Champion I was flying in 1956, however, was more akin to what would have been found in a 1939 Stearman trainer.

It was summer and a sunny, VFR day as I departed El Monte Airport in the 90-hp Champion on my very first solo cross-country flight to Ryan Field in Hemet, 54 nautical miles away. Like most students, I was excited to be flying to a distant airport on my own. Navigation equipment on the Champion consisted of a magnetic compass and a low frequency (AM) radio—yep, that was it—so this flight would be primarily by dead reckoning and pilotage, except for the last leg where the low-frequency radio range (LFR) near March Air Force Base would be a bit of help. My problem was not to be navigation, however, but smog.

Thanks to emission and burning controls, the air quality in the Los Angeles area these days is pretty good, but in the 1950s it was a different story. There were times that the smog was so thick that seeing things a mile away was problematic. “Smog Alerts,” where children were advised not to play outdoors, were frequent. Coughing and wheezing even in healthy adults was common. I don’t remember if there was a smog alert the day of my cross-country flight, but if not there should have been.

LFRs no longer exist, having been replaced many years ago by VORs, but in the 1950s VORs were few and far between and not many aircraft were equipped to use them anyway, so LFRs were a common radio navigation tool. They were even used for instrument approaches. A LFR consisted of an array of antennae that broadcast audible signals in four quadrants out to a distance of 100 miles or so. What the pilot did was tune in to the appropriate frequency and listen. In two of the quadrants he heard a Morse code A (dit-dah) and in the other two a Morse code N (dah-dit).

Where each pair of quadrants overlapped, the tones in the A exactly filled in the gaps in the N and the pilot heard a continuous tone, which defined an airway about 3 degrees in width, four airways total for each LFR. If he drifted off the airway he would begin to hear either the A or the N and immediately knew which way to turn to get back onto the airway. Directly over the antenna array there was a null point, or cone of silence, which told the pilot when he was over the station. The constant tone plus the broadcast of the two-letter identification code every 30 seconds in one’s ears was enough to drive a pilot crazy. And you thought NDBs (Non-Directional Beacons) were primitive?

I departed El Monte and popped out above the nasty brown layer at about 2,500 feet on my way to my cruising altitude of 5,500 feet, an altitude that would keep me above the minimum altitude required for overflying March AFB. Above the smog layer, visibility was virtually unlimited and the scenery spectacular. The Angeles Crest Mountains glistened against a bright blue background. Ground visibility, however, was a different story. I couldn’t see ground features very far ahead of the airplane, maybe five miles or so, and the closer I got to March AFB the thicker the smog became.

My plan was to intercept the LFR airway west of March AFB, fly directly along the airway to the null point, and then fly a magnetic compass course, allowing for the northwest wind, outbound to Ryan field, a mere 15 nautical miles and 11 minutes beyond March (none of the LFR airways passed close to Ryan Field). Shouldn’t be too hard, right?

I had no problem intersecting the LFR airway and following it inbound to March AFB, but at that point I could only see directly below me—ground features more than a mile or two ahead of the aircraft were completely obscured and there were no roads to follow even if I could have seen them. To make matters worse, the country between March AFB and Ryan Field (and beyond) consisted of nothing but low hills and grasslands whose summer color matched that of the smog. It occurred to me then that this was not going to be easy. From March AFB I flew five minutes beyond my calculated ETA with no sign of Ryan Field, so I turned south to intersect an airway, followed the airway back to the March LFR and took another stab at finding Ryan Field. I repeated this process three times with the same result—Ryan Field apparently had vanished.

After my third attempt, the prospect of finding Ryan Field seemed highly dubious and a fourth attempt would have made fuel an issue. So, I plotted a course from March AFB to San Bernardino Airport. Finding San Bernardino was relatively easy because there were recognizable ground features along the way even though visibility downward wasn’t appreciably better. I landed at San Bernardino with a decent fuel reserve, filled-er-up and headed back to El Monte. On the return flight I was feeling a bit low, wondering how I was going to explain this failure of airmanship to my instructor. The bad news was that I had not accomplished my mission of completing a cross-country flight to Ryan Field. Even though I had been somewhere in the vicinity three different times, that probably would not count. The good news was that I was always safe and was never lost—Ryan Field was lost but I always knew where I was and how to find my way to wherever else I needed to go.

My instructor was waiting for me when I landed at home base and I sheepishly related my misadventure. He smiled, and then told me that most of the students he sent to Ryan Field didn’t find it because he intentionally sent them on a smoggy day. He explained that the experience of not finding my destination was much more valuable than simply landing at Ryan Field and returning. He had reinforced what he had already drummed into my head and what I still remember and practice: recognize a potential problem early, have a backup plan, and execute “Plan B” before the potential problem becomes a threat. His explanation made perfect sense and I relaxed—I had done everything right and had taken one more important step in getting my private airman’s certificate.

To this day I have never had so much as a glimpse of Ryan Field. Finding that airport would have been a lead-pipe cinch with a G1000, or any of today’s modern avionics for that matter. Having one at the time, however, wouldn’t have provided me with such a rich and valuable learning experience.

One of these days, when we’re flying in Southern California, I’m going to plug KHMT into the G1000 and land there—just for the heck of it.