Blog - Latest News
You are here: Home1 / Article Archive2 / Weather Geek3 / 4 or 6 or 8 things to think about for summertime flying 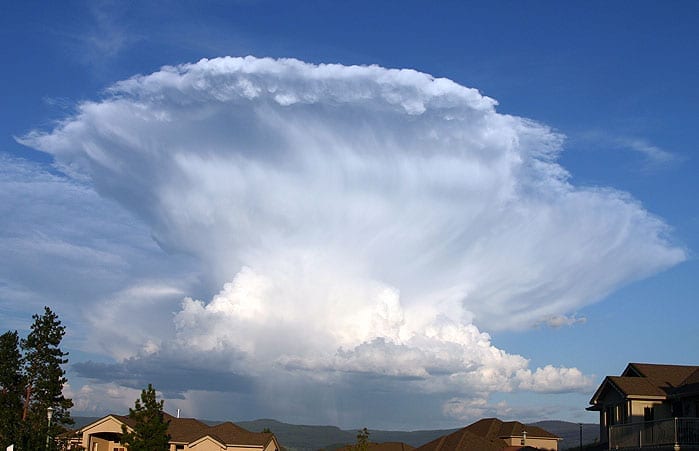 Actually I am going to use two events to give you some items to ponder about summertime flying.

When I got up (at 4 a.m., believe it or not) on the morning of June 29th I, as usual, looked at the weather, including the radar. Even though there had been zero mention of thunderstorms or even rain the day before, there was a sizable cluster of storms moving by to our north. It was headed southeast and was going to miss us. The annual drought would continue.

A building cumulus cloud can quickly turn into a towering thunderstorm during the summer months.

Little did I know what would come later in the day, but that is getting ahead of the story which, at this point is about nocturnal thunderstorms. I have read meteorological theories about what causes them until my eyes crossed and my brain shorted out.

Nocturnal storms are hard to predict and what I think I learned is that they occur when it is warm at the surface with a high dewpoint and then, bam, a rogue little bit of cold air aloft wanders overhead and provides the instability required for the things to fire up.

The night storms can be every bit as mean as daytime storms but they are pretty easy to see and avoid because of the light show.

I used to love to sleep on my grandparent’s sleeping porch in Arkansas when a nocturnal storm would light up. The show was great and when it ended and gentle rain was falling through the short-leaf pines, the sleeping was good.

The first few times this happened the sleep was bothered a bit by the fact that I had to fly east the next morning and thought I would have to deal with the storms. That was no problem because they usually dissipated at or shortly after sunrise. If there were going to be more storms during the day, they would start building by noon. You could look at the cumulus at noon and if they were congested it suggested an active afternoon.

That is one reason why I get up at 4 a.m. My good friend Michael Boyd always though I was nuts for that until he slept until noon one day in Charleston, S. C., and was greeted by too many storms to allow passage home to Maryland. I was already home when he got up. My trip started at 7 a.m. and was relatively peaceful.

Back to June 29th: It was a really hot and sticky day. I was aware of some thunderstorm activity out in Ohio but nothing suggested that the area from Ohio to the middle-Atlantic would be ripped apart by straight line winds from a line of strong thunderstorms that afternoon and evening. I saw estimates of up to 3-million without power.

As often happens, this weather moved by where we live, near Frederick, Maryland, without doing a lot of damage.  Storms often weaken when they come off the Catoctin Mountains just to our west. Then they gain all their strength and more back before they get to the Washington DC metro area. I’m sure you saw pictures of the mess on TV. It was actually a fairly narrow line of storms and it passed through in 20 or 30 minutes. Hurricane force winds don’t have to last long to do serious damage.

While the storms we most often deal with in our airplanes in the summertime are air mass storms, there are fronts and low pressure systems that spawn storms. Mostly, though, we deal with individual storms or clusters of storms. En route we deal with them by avoiding them like the plague. In terminal areas we deal with them by developing a good knowledge of the circulation in and around thunderstorms and avoiding bad places. Changing winds and downdrafts can take a terrible toll on aircraft performance.

I am going to use an airline event to illustrate this because this particular accident related to the two big hazards of summer flying: thunderstorms and density altitude.

July 9, 1982. New Orleans. A typical summer day, hot and humid with scattered thunderstorms in the area but none reported as severe.

As the crew taxied a heavily- loaded Pan Am 727 for takeoff they discussed, among other things, the heavy load, the fact that they barely had balanced field length, the procedures to maximize takeoff performance, possible fuel dumping in case of any power loss, and the fact that the wind was swirling around the airport as recorded and reported by the low level wind shear alert system.

Pan Am Flight 759 crashed on takeoff after encountering a thunderstorm.

A lot of airplanes were taxiing at the time and in the course of a few minutes the different crews requested that they be allowed to use the four different runways. It depended on which windsock they were looking at.

There was a thunderstorm on the northeast corner of the airport, visible both to the eye and to the radar in the nose of the 727. The thing that made it more difficult to assess was the fact that it was moving toward the southwest. That is the opposite of what we usually deal with.

This meant that the front of the storm was where we usually find the back of the storm.  The strongest winds out of a storm generally come out of the side toward which he storm is moving. Whether this crew had ever seen a westerly moving storm before was not addressed in the accident report.

When they started to roll on runway 10 the last thing they heard about wind was that it was from 070 at 17 and that a heavy Boeing had reported a 10-knot wind shear on final to that runway.

Everything sounded normal until right after the V2 call when the captain said to the first officer, who was flying, “Come on back, you’re sinking. Don, come on back.” Then the ground prox whooped and the sounds of impact followed shortly after.

The airplane climbed to about 100 feet where it encountered a 400 fpm downdraft and a decrease of 38 knots in the relative wind (shearing from a headwind to a tailwind) over a distance of about a half a mile. The microburst that caused all this was located just north of the runway and a little more than halfway down the runway.

The airplane hit 50-foot trees first, near the tops, and then crashed in a residential area. The crew of seven, 138 passengers, and eight people on the ground perished.

In a highly unusual move, the NTSB listed the probable cause as An Act of God. I wrote an editorial questioning this and someone at the NTSB sent word that I made them unhappy, they were just trying to do something different.

There were lessons here. The margins were pretty thin on that takeoff and everything combined to make what would usually be a manageable wind shear encounter unmanageable.

The crew was aware of what was going on and had thorough discussions about most of the factors influencing the takeoff. They did not, however, openly discuss the possibility of a downdraft and the resulting wind shear. If they had been taking off toward a storm that was moving away from them the sequence of events would have been different. But this storm was going the “wrong way.”

A thunderstorm is, by nature, unstable. That relates both to the atmosphere that creates and supports it and to the capricious nature of the storm. They are constantly changing, literally from moment to moment, and where one flight might pass through with a bit of turbulence, one a minute later might encounter a severe wind shear. And while they almost always move in an easterly direction, there are exceptions.

Lost in the smog

It isn’t always the instructor’s fault