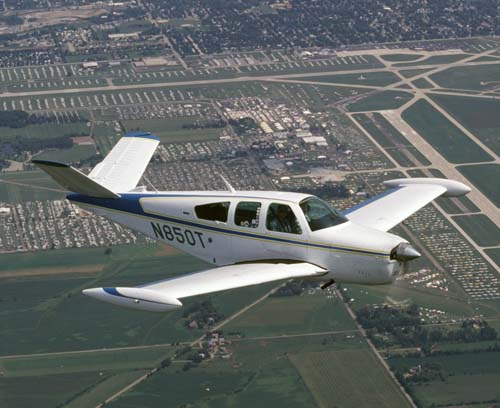 The Beech ad promises businessmen can “just step in and fly.”

I sort of stirred up a hornet’s nest with a recent post about Cirrus airplanes and Cirrus pilots. A few commenters compared the discussion with ones about the Beech V-tail (Model 35) Bonanzas a long time ago. That airplane was actually referred to by many as the “V-tail doctor killer” back in its heyday. If anything, the V-tail Bonanza was even more controversial than the Cirrus is today. As with the Cirrus, the problem was more with pilots than with the airplane.

When the Bonanza came out in 1947, it was unlike anything else. It was aerodynamically clean and the very first ones would cruise 175 mph with a 165-horsepower engine. That speed came at 10,000 feet where the engine would develop but 115 horsepower.

The cabin was roomy and comfortable for four and the baggage compartment was spacious.

The initial price of the Bonanza was $7,345 and as production was beginning, Beech projected a production rate of ten airplanes a day. It was marketed as a business airplane.

I flew every model of the V-tail built and despite some controversy about the structure of the airplane, I felt comfortable flying them all. They did have early wing and center section problems with the 35 but that was made right and, starting with the A35, there we no further real problems except for one thing: The airplane had a high incidence of in-flight structural failures.

In virtually all the structure-related accidents the airplane was flown outside the envelope. Often as not this was the result of the pilot losing control. The airplane had light and delightful control forces and while it was stable in pitch it was less so in roll. If a pilot was going to hand-fly in clouds he had to be both good and attentive. Left to its own devices, a V-tail would be in a spiral dive in a heartbeat. A VFR pilot in clouds was almost autodead.

Bonanza pilots were either veterans or made up of a population much like today’s Cirrus pilots. The ex-military pilots were almost all bomber or transport pilots. I guess most fighter pilots wanted to just put the risks of flying behind them.

That means that most Bonanza pilots were not used to such a clean airplane that was not stable in roll. Unlike the Cirrus, not much early Bonanza flying was IFR. It could be done but the system was pretty crude in the years after the war and there was little capacity.

The Cirrus Owners and Pilots Association shows the overall Cirrus fatal accident rate to be 1.63 per 100,000 flight hours. I calculated a slightly lower rate and their number and mine are close enough together to validate the methodology in both cases.

The “V tail doctor killer” in flight over Oshkosh.

In later years the V-tails had comparable accident rates to other high-performance singles, including its Model 33 and 36 siblings with regular tails. There was a self-serving faction in general aviation, though, that went on a crusade to demonize the V-tail because of the in-flight structural failures.

Grist for the mill was the fact that Bonanzas with regular tails seldom had structural failures. They did have just as many loss of control accidents. The difference was they were in one piece a millisecond before becoming thousands of pieces after a collision with the ground. The V-tails didn’t make it to the ground in one piece,

Investigators did find a common thread in V-tail accidents. Effective with the C35, the chord of the tail surfaces was increased by seven inches but the internal structure remained the same. As a result, the tail stabilizer is extended to 16 inches ahead of the spar on C35 and later airplanes.

In the 35, A35 and B35 the airframe failures were usually a result if the wings failing first. From the C35 on, the first failure was usually of the tail with the wings next failing in a downward direction.

It was determined from wreckage that when the airplane was operated in excess of the never exceed speed, the unsecured leading edge of the stabilizer would fail first, in an up or down direction. Even though the airplane met the certification standards, it was determined that anchoring the leading edge of the stabilizer to the fuselage at the root would minimize this and give the pilot a little extra time to recover from an overspeed condition.

There is probably a slightly smaller percentage of high speed loss of control accidents in the Cirrus but when there is a loss of control, the airplane is in the same jeopardy as a Bonanza because the airframe parachute recovery system doesn’t work at high speed. The Cirrus probably isn’t as aerodynamically clean unless, that is, it can cruise at 175 miles per hour on ten gallons of fuel per hour.

Piper PA-32 and Cessna 210 airplanes have airframe failure rates similar to the V-tail Bonanza, always when they are operated outside the envelope.

About three-fourths of the V-tail Bonanzas are almost 50 years old or older so they don’t fly much now. They are more objet d’art than they are serious transportation machines. There are not good enough numbers to calculate a remotely accurate accident rate on the older Bonanzas today. It is probably safe to say that they do reasonably well because pilots don’t push hard in them to complete missions.

Pilots loved their Bonanzas, too, but in a somewhat different way from Cirrus pilots today. As the controversies raged about weak wings and failing tails and unfortunate accident rates, most Bonanza pilots couldn’t care less. They knew they were flying the fastest and sexiest single out there and I guess they figured that its detractors were just jealous. Fly on.

Going out on top
86 replies