Blog - Latest News
You are here: Home1 / Article Archive2 / I was there3 / Breaking in my iPad on a helo ferry 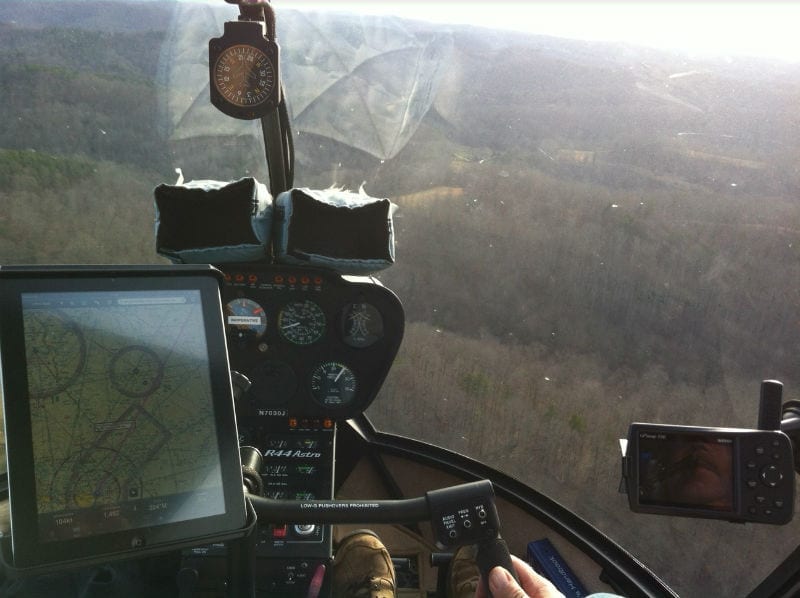 Occasionally, I get a break from the dreary doldrums of flying a FLIR-equipped MD500E police helicopter (I know, right?) with a ferry flight, moving ENG (electronic news gathering) R44s around the country for a maintenance operation responsible for about a dozen ships stationed hither and yon. Last month, the opportunity arose to fly via airliner to Pittsburgh to move a ship to Atlanta. I thought it would be a good time to put my new iPad to the test. I have flown several ferry flights from the Robinson factory in Torrance to Atlanta, and my iPhone had come in very handy.

The first thing I wanted to figure out, even before catching the plane to Pittsburgh, was how I was going to mount the iPad. I wanted two things:  First, I wanted to operate it easily with my left hand, and I wanted to avoid a kneeboard mount, as I wanted more of a heads up viewing ability.

Plenty of gadgets in this helicopter.

I went to the hangar where a couple of 44s sat around in some form of maintenance action or another, and climbed in one with the iPad and a bag of my Garmin GPSs and various mounting options.  Within a few minutes, I decided that I was going to try flying with the iPad mounted to the top of the center stick, in the same place as a 496 might sit.

This would put it close enough to read the charts, on the left side, heads up and without blocking any instrumentation. I did, however, bring along my entire bag of tricks. The bag of tricks includes a wiring harness to tap into a 12 volt radio plug commonly mounted in ENG ships, spare plugs and cables for a 396, WX antennas, extra headset, and a half dozen flashlights and various batteries. I am still amazed that after many commercial flights, TSA has yet to show any interest in my bag. I guess my stunning resemblance to Bruce Willis is more of a distraction than I realized.

So, the plan was to arrive in Pittsburgh mid-morning, grab lunch with the Director of Maintenance and the local market pilot, and head back to Atlanta. I wanted to shoot the pass through the mountains north of and into Asheville, North Carolina before dark. Apparently that Murphy guy looks a lot like the local market pilot in Pittsburgh, because he took the pilot’s place and lost the ignition key to the helicopter. Then he spent a couple hours driving home and to who knows where else to look for it.  Nope, no key. Now, all of this is occurring on a Sunday afternoon.

I whip out the iPad, pull up the Google maps and call the nearest locksmiths until I find one dumb enough to answer on a Sunday.  I could go on for a couple of pages about how this went, but eventually, after removing the ignition from the panel, taking it apart, and monkeying with it for another couple of hours, the locksmith came up with a $350.00 key for the bird.  I pointed the locksmith at local pilot Murphy for payment and climbed in to get out of Dodge a mere 4-1/2 hours later than I wanted to.

Having fretted over the winds, the time and the course for hours, I now reflected for a moment upon all the accident reports I have read over the years that started the chain of events with late starts, pressures to get there and dumb decisions by good pilots that got them killed and left me wondering how they ever got to that point.

I climbed back out, made myself take the time to re-preflight the helo, re-check the weather and TFR pictures, and then got back in to go. I currently use ForeFlight, although I intend to download the free trial of Garmin’s updated application before my next flight to see how it works.

I departed Allegheny County Airport heading just west of south.  Within about 30 minutes, I decided I did not like the way the iPad was mounted.  It had felt good enough with the aircraft static on the ground, but with the hydraulic controls, the weight of the iPad and mount made it uncomfortable to hold the cyclic after a while.   I would move it to the right side in a window mount configuration at my next fuel stop. Fuel stop. Dadgummit, it was now late Sunday afternoon, and the stop I had planned for fuel was going to have their runway rolled up with the sidewalks by the time I got there.

I perused the iPad, and chose Charleston, WV (KCRW) as my fuel stop. The people at the general aviation FBO were friendly and efficient, and after refilling my water bottle and obtaining crackers from the vending machine, I was on my way with my new iPad setup. My next stop would be Greenville, South Carolina (KGMU), I hoped.

Cruising along at 500 to 1000 AGL  depending on the terrain, I was impressed with the scope of coal mining from southern Pennsylvania all the way into West Virginia. It was an awesome sight, both pretty and ugly. I was also impressed by the helo vibrations telegraphed to the iPad through its window mount. Not. That got irritating fairly quickly, and I ended up popping the device out of its mount and laying it on the seat beside me.

My next stop was on the other side of Asheville’s valley. No big deal in an airplane, but flying low level at night, I wanted to see the mountains on either side of me.  Although I had my trusty old 396 as a backup to the iPad, I like to eyeball the granite clouds. Arriving over Greeneville – Greene County (KGCY) to line up with the pass into Asheville, I noted two things.  Number one, it was getting dark faster than I liked, and number two, I couldn’t remember how to turn down the iPad’s screen, which was blinding me now every time I looked at it.

At night, in the mountains around Asheville–not a good place for an electrical failure.

I had a choice –discard the iPad and get into the valley before total darkness, or land and take the time to adjust and fiddle with the darned thing. Frustrated with myself for not being better practiced at the operations of it, I set the iPad aside and flew the aircraft. When all else fails, or when it’s all up in the air, reverting back to the basics has always worked for me before.

Murphy took this opportunity to stick his head in the cockpit.  As I flew into the valley surrounding Asheville, I turned on my landing light due to a medevac helicopter operating nearby. My light immediately blew out, my panel lights blew out, and my alternator warning light activated.  A check of the amp meter showed a decline in amperage, so I recycled the alternator and the light went out. The amperage showed normal. I turned on the factory red backup panel light located above my head, retrieved one of my Dollar Store LED flashlights for extra backup and peace of mind, and continued on to KGMU.

About 12 miles out, I called the tower at KGMU and asked the controller if the GA fuel FBO was still open. Initially, he told me no, and aimed me toward a self- serve FBO. A minute later, he told me that he’d called the full-service FBO and the lineman had offered to refuel me although they were already closed. They did, and I was grateful for the service that Greenville Jet Center provided.

I took a short break to think everything over, and got to looking at the iPad while I did.  I didn’t have an external GPS yet for it, so I’d left the 3G service on for a more accurate location. The battery, fully charged before takeoff, was now down to 12%. Wow. I was surprised at how much battery power I’d used, but I was close to home now (about an hour away) and into very familiar geography. I had a trip book of charts that I make for every ferry flight as backup and to ensure legality, good VFR weather, constant civilization along the way, and an airport every 10-15 miles. So, off I went, arriving at KLZU a mere 5 hours later than anticipated.

I thought I had a handle on the workings of the iPad, but the basic ability to turn down the screen lighting eluded me when I needed it. It was simply a lack of familiarity, and it was easy to see how it could have distracted me from flying in a dangerous manner. I want to explore the mounting options again on a local flight or two before my next long ferry flight. Having paper and my Garmin 396 backup were key to a safe flight. A habit of pouring over other pilot’s stories of misadventure, and reading post- accident reports helped me to constantly evaluate my aeronautical decision making. And, you just can’t have too many flashlights. 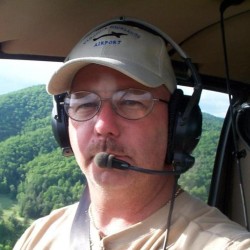 Go or no go: how strong is the front?
Scroll to top