Blog - Latest News
You are here: Home1 / Article Archive2 / I Can't Believe I Did That3 / A severe, multi-day case of “get-there-itis”

This summer I used the pause between the second and third waves of Covid to do some international flying. My plan was to fly from my native Slovakia via Czechia to Peenemünde (the test facility for V-1 and V-2 rockets in WWII) in northern Germany. This got cancelled due to a stormy front coming from the North Sea, heading east. So I opted for plan B while on the same historical epoch and took off to visit Wolfsschanze (Wolf’s lair – Hitler’s eastern front headquarters between 1941-1944) in northeastern Poland.

This boasts an old Nazi-built airfield, nearby bunker ruin complex surrounded by pine forests, a museum of the famous Polish 303rd squadron of RAF, and some wonderful lakes to top it off. It seemed like a great destination to spend a long weekend. As for my return route, I planned to fly along the eastern border of Poland back to Slovakia, stay overnight at the lovely airport in Svidnik (LZSK) just across the border, and the next day fly back home to LZDV. 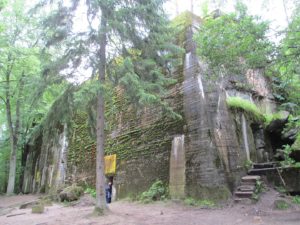 The Wolf’s Lair is a fascinating place to visit.

I reserved with my charterer a WT9 Dynamic, a beautiful and fast ultralight with a Rotax engine. However, since my destination got changed already, why not the plane too? A day before my planned takeoff, I learned the Dynamic was still somewhere in Croatia, so I opted for the trustworthy Cessna 150 Reims Rocket.

My route led through Warsaw Babice, an airfield familiar from my previous trip. The weather and service had been great, avgas and credit card payment was no problem, so it was a welcome stop after a 3.5 hour flight. Then I continued to Olsztyn, another 1.5 hour flight over flat but increasingly picturesque Polish countryside with plenty of lakes and forests.

My landing at the airport was smooth, a gentleman at the airport was quick to organize a hangar, bicycle, and transport of my suitcase to a nearby beautifully restored B&B. I even managed to visit the museum the same evening, riding on the paved road from airfield. I could not escape thinking how many forced laborers built the road with cobbled stones, probably commandeered from towns around the place.

The next morning all was great except the weather forecast: the aforementioned front was coming from Germany, with the outlook for several days of non-VFR weather. So I made a decision to fly back home before noon, shortening the trip considerably. I had to promise to Stanislaw to return next year and let him show me the former Me-109 stands where fighters had been on standby to protect their Führer.

I took off before noon, as planned, and headed south. Soon the sky grew dimmer, and clouds started turning from cumulus to a thick carpet around 3000 ft AGL. Rain patches started to appear and two hours into my 3.5 hour planned trip I had to dodge them. The Flight Information Service (FIS) was very helpful and kept briefing me on the weather along my route (I filed a flight plan – not mandatory for flights within the EU, but strongly recommended). Then about one hour from my destination a solid wall of rain appeared in front of me.

After some discussion with FIS, I took her recommendation to divert east and land at a Stalowa Wola, a well-known airfield with a great tradition of gliding sports. The last 15 minutes of my flight I was flying in pouring rain and headwinds up to 30 knots. When I finally found the airfield, it was empty (who would be sitting around the radio when no sane person would be flying in such a weather, right?) and managed decent landing in a headwind of 15 knots. I taxied to the apron and stayed in the aeroplane until the storm passed.

Then I dared to venture out and look for some humans. It turned out there was a group of teenagers staying in the airport building, having just completed their first solo of glider training, and they were looking forward to the next day. They gave me the phone number for the chairman of the aeroclub. Dariusz did not answer the phone nor responded to my text but sent a very nice colleague, who showed me to a spacious room where I could stay for the night and get a shower. My plane was hangared with the help of a crowd of fresh glider pilots. With a short taxi trip to a nearby town, a huge pizza and a beer, life started to improve.

The next day Dariusz came to organize a car and a driver for me to the nearest gas station to refill my Cessna. To my request that he should pull out his terminal so I could pay the fees, he just responded, “The gentleman should consider himself our guest.” 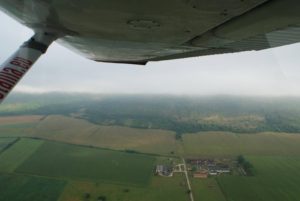 Not a great view for a VFR flight.

So the following day I took off for my original destination (LZSK). Having landed there some 40 minutes later (and being received by a friendly gentleman who turned out to be the one-person staff of the airfield, chairman of the local aeroclub, and a very accomplished pilot), I was readily informed of another front building up on my route. Even coming there I had to dodge some low clouds, this time in the mountains of Eastern Slovakia—not fun. I decided to wait things out, only witnessing two thunderstorms between noon and 5pm, with another coming later in the evening. So I tied down my plane and prepared for staying the night—again in the clubhouse at the airfield, with a shower and two large dogs guarding my plane and myself for the night. We refueled the plane for the next day and hoped for a good weather.

The next morning, Monday, things were looking mixed. At any point somewhere along the 300nm route to my home base, there was some thunderstorm. But this time I was determined to get home. I had spent too much time waiting for the weather. And anyway, it kept changing so there was hope the storms would clear before I got to them with my slow 150. We said goodbye to the friendly flying colleague and I took off southwest, but the storms decided to wait me out rather than dissipate. I know the area well, having grown up in the East and travelled around, but you will agree things look very different from 3000 ft AGL than they look from a car on the road.

About 30 minutes into the flight I was approaching CTR of Kosice, an important regional airport. The tower let me in on my now-westbound route but advised me of thunderstorms along the western border of their area. And there it was. I told them I would deviate slightly southwest and continue; if things got rough I would turn back to land and wait it out.

Well, my get-there-itis was getting more severe by now—I was determined to at least try to get through the mountainous area of south central Slovakia. I was reminding myself of all the good things I read and watched in all those instructional videos: 178 seconds, conscious flight into IMC, etc. Well, soon enough I found myself flying some 500 ft. AGL ever-lower ceilings with ever-increasing hills around me. At one point I took a picture of a hillside on my 9 o’clock with the tip of it hidden in the cloud. On my 3 o’clock the view was identical (see picture above). When I was shooting that picture, I literally thought: “if this is the last photograph I take in my life then I will be remembered as an idiot.” It is a weird feeling when your navigation shows you are going to hit the terrain in less than 3 minutes (see picture below).

So I put down the camera and made a steep 180-degree turn to the right in order to get out of that valley. Remember you read you should fly along the side of a valley and not in the middle? That is some good advice, which I of course did not follow. Nevertheless, I managed to squeeze in a rather tight turn and head back. I called the FIS to inform them I would try a bit more south since the clouds looked thinner there. That would mean I entered Hungarian airspace and wanted to switch frequency.

The FIS suggested, however, that I should stay with them since they could hear me and “we will hand you over to Hungarians if needed.” A few minutes later I flew into another valley with a dead end under the ceiling, but this time I decided to turn back earlier and divert even more south. After that the sky started to clear, and 10 minutes later I flew into a beautiful summer day with some cumulus clouds but otherwise beautiful blue sky.

The rest of my flight was uneventful and with one stop over at LZLU (I hear that is the only airfield which has a memorial to sky divers) I landed tired but safe at my home base.