Blog - Latest News
You are here: Home1 / Article Archive2 / I was there3 / Come fly with me: life as a Forward Air Controller in Vietnam

I served as a Forward Air Controller (FAC) in Southeast Asia, flying the North American Rockwell OV-10 Bronco from Thailand as well as from bases in South Vietnam. I flew 165 missions over North and South Vietnam, Laos, and Cambodia. Join me now on one of those missions.

During the Vietnam War, FACs flew day and night at low altitudes, and in every sort of weather. Operating from Jeeps, FACs also deployed in support of ground forces. 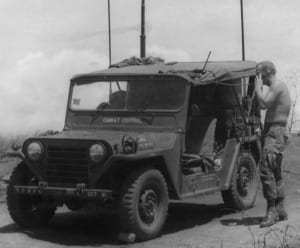 Not all Forward Air Controllers were in the air.

We directed air strikes flown by US and Allied warplanes in support of embattled ground units, searched for targets, interdicted enemy lines of communication, and coordinated rescue operations for downed airmen. We also struck targets by directing artillery strikes and naval gunfire. We were the eyes, ears, and voices above the battlefield providing a vital link between troops in the field, the various command and control agencies, and US and Allied warplanes.

A few “Fast FACs” flew F-100 Super Sabres and F-4 Phantoms. The more numerous “Slow FACs” flew slow, propeller-driven aircraft, as their low-speed maneuverability and endurance were ideal for locating and maintaining visual contact with targets across the battlefield.

Some Slow FACs flew T-6 Texans or T-28 Trojans, but most flew either Broncos, O-1 Birddogs, or O-2 Skymasters. Both O-1s and O-2s were off-the-shelf Cessna aircraft modified for the FAC mission. The OV-10 was developed specifically for counter-insurgency combat, but its primary mission was the FAC role.

With a target identified, FACs had to describe both it and its location to attacking aircraft. This was referred to as “marking the target.” A valuable tool in marking targets was our forward-firing rockets armed with white phosphorous warheads (hence their name Willie Petes). Upon detonation, Willie Petes created a distinctive white plume of smoke and, using that smoke as a reference, we ‘talked the eyes’ of attacking pilots onto the target. To make our job easier, and the mission quicker, we endeavored to get our “smokes” as close as possible to the target. Hitting the target was considered the perfect pass and, when you pulled it off, you could simply direct the attacking aircraft to, “Hit my smoke!”

Winds, dive and bank angles, g-loading and airspeed all played a part in final placement of the pipper. Maximizing your chances of hitting the target required having your aircraft perfectly coordinated before firing/releasing your ordnance. Clouds, sun angles, and especially potential gunfire from the enemy were other factors that came into play while maneuvering to get the pipper in the right place at the right time. As you might imagine, extreme maneuvers were often required. 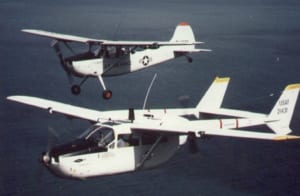 Not your typical warbirds.

Now, climb into my back seat to experience such a time on a mission to find and interdict enemy forces and/or supplies in eastern Cambodia. I was conducting visual reconnaissance near the Vietnamese border over some very dense, triple-canopy jungle rising over 100 ft above the terrain below me. Through a small break in the jungle, I spotted a wooden bridge, approximately 50 ft long, spanning a river. It was only possible to spot it when either directly overhead or else looking upstream to the north or downstream to the south.

In an area where there were no signs of civilization, I thought, “Who would be using this bridge?” Through my binoculars, I could see vehicle mud tracks on the bridge and assessed it was likely being used to supply the North Vietnamese. Referencing my map, I plotted the bridge’s coordinates and reported them to the Airborne Battlefield Command and Control Center, callsign “Cricket.” Cricket quickly called back validating the target and clearing me to strike it. They also informed me fighter aircraft were already headed my way.

Within minutes, a flight of two Air Force F-4s checked in on my radio frequency. They were already headed in my general location and we used a radio direction-finding procedure, known as a “DF steer,” to give them a more precise heading to my location. Soon thereafter, my Radar Homing and Warning scope lit up indicating they had “locked me up” with their air-to-air radar. That’s when the adrenalin started to flow; in a few moments, they would be in my area and under my control!

As they neared, the flight lead passed me their “line-up,” including the weapons they were carrying and their “play time” (how long they could stay with me). They were both carrying six Mark-82 General Purpose bombs (500 lbs apiece), which were perfect for this target. However, their play-time was short—they had only enough gas to make a single pass.

Unfortunately, the flight lead also informed me their bombs were fitted with “daisy cutters,” an extended fuse designed to ensure the bomb detonated on contact (even with foliage) rather than going deep into the earth before going off. Earning their name because they would cut down everything above ground level, they are not the preferred fusing when striking a hard target like bridges or bunkers. I thought they might just blow the dust off the bridge, but it was the hand I was dealt, so I briefed them on the target and that it would only be visible using either a north or south run-in.

Not the right fusing, but sometimes it’s all you have.

I was orbiting the bridge at roughly 6,000 ft AGL in a counterclockwise direction when the flight lead radioed he might have me in sight. So, I started rocking my wings and turned on my smoke generator, which produced a smoke trail from my aircraft and highlighted me against the jungle below.

The flight lead immediately, replied, “I’ve got you smokin’ and rockin’ FAC, if you can mark the bridge now, I can roll-in behind you.”

I had just passed the downstream view of the bridge but, because of the fighter’s low fuel state, I had to roll-in now. So, I radioed, “FAC’s in to mark!” as I instinctively went full throttle, pulled the nose up, and rolled right, away from the bridge. With about 30 degrees of turn completed and with my aircraft nearly 60 degrees nose high, I stopped at about 45 degrees of bank and continued to pull my nose to the horizon. Inverted, I sliced through the horizon with my right wing about 30-45 degrees low and maintained back-pressure. Still inverted and nearing 45 degrees nose low, I tilted my head back and picked up the target through the top of my canopy. I was now on my back heading south toward the bridge, so I leveled my wings with the horizon and continued pulling back pressure until I was once again right side up, but still diving earthward.

As I approached about 30 degrees nose low, I released a little back pressure on the stick to slow the pipper’s movement across the ground. When the pipper reached the bridge, I stopped its movement by unloading to about a half-G and fired a Willie Pete. I immediately pulled out of the dive and, as soon as my nose was above the horizon, I rolled 80-90 degrees left to see where my smoke would hit. When the plume of smoke blossomed dead center on the bridge. I smiled and radioed, “Lead, HIT MY SMOKE!”

Lead immediately responded, “One’s in hot from the south, FAC in sight.” The “…in sight” call was important as it meant we were deconflicted during an especially perilous time.

I saw him as well and replied, “You’re cleared hot,” meaning he was cleared to drop his bombs. 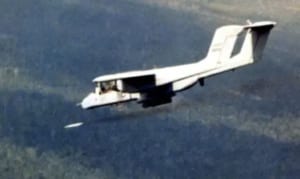 I watched him dive down, release his bombs, and then climb away. The bridge was quickly enveloped by a geyser of mud and water flung high into the air. There wasn’t much smoke from the impact of lead’s bombs, which worried me that they had landed in the river – ‘washing’ rather than ‘blowing’ the dust off the bridge. As the water and mud fell back to the earth and the little smoke present had cleared, it became apparent lead’s bombs had landed under the bridge and the Daisy Cutters had worked as advertised; several trusses were blown out and the bridge had partially collapsed.

Meanwhile, #2 had circled around to the north and he radioed, “Two’s in hot from the north, FAC in sight.”

I answered, “You’re cleared hot, aim where lead hit!” I watched #2 dive down, release his bombs, and climb away. His bombs exploded in the same place lead had struck. As soon as the bridge was again visible, I saw it had completely collapsed with parts of it being swept away in the current.

The F-4s were already heading homeward when lead asked, “FAC, you got our BDA?” (bomb damage assessment report).

Their BDA included the time on and off the target, the target coordinates, and ended with, “Bridge destroyed.”

He said, “I’d like to see that marking pass again.”

Laughing, I answered, “I’ll see what I can do next time.”

The rest of the mission was routine—hours of utter boredom interspersed with moments of sheer terror. However, the best part of the mission—seeing my Willie Pete strike that bridge dead-center following my aerobatics to put it there—sticks with me today.

Lost in the Canadian Arctic
Scroll to top