Blog - Latest News
You are here: Home1 / Article Archive2 / I Can't Believe I Did That3 / Lost in the Canadian Arctic 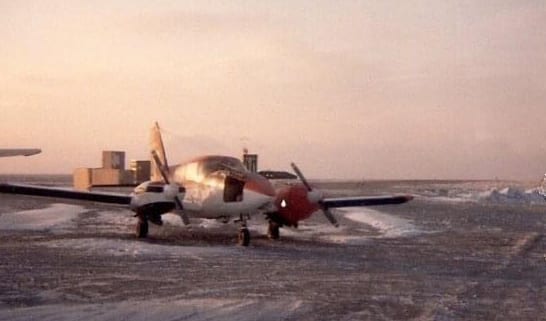 I was a fairly new, 22-year-old bush pilot based in Cambridge Bay, in Canada’s Arctic (now Nunavut) in 1982. I had the only aircraft based this far north at the time and was the first call for medevacs, with our twin engine type E Aztec with long range tanks. It was usually single pilot night IFR, but on this flight, one of my two bosses had recently arrived to gain twin engine experience even though he was not multi-rated or instrument rated.

The nearest hospital was Yellowknife, far to our southwest. Our patient, from a nearby community to the east, was a young girl in labour. On arrival I was told that they were going to attempt delivery first and to stand by. This soon changed to an urgent need to get to the hospital.

It was much faster to go directly across the tundra, but we only had one NDB en route, at Contwoyto Lake,  instead of the VOR west of us. The DEW Line was still manned at 100 mile intervals and I requested assistance with maintaining a heading and flight following for as long as possible (the groundspeed reported was not possible so I ignored that info). I also had a very bad head cold, but not going wasn’t a possibility due to the very lucrative charter flight and the presence of my boss. He had also lined up another flight upon our return and he told me that I could nap on the three hour flight with the autopilot engaged. 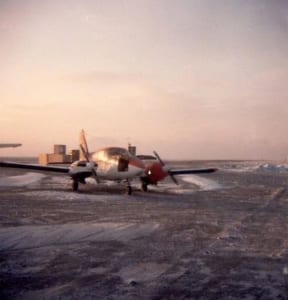 Long range flight in an Aztec with only a single NDB? Just part of the job.

I elected to stay lower, at 8000 ft, due to the head cold and I told my “co-pilot” that he must regularly turn off the autopilot to home in on the NDB or he would get erroneous readings. I don’t believe that this was ever done and when I awoke, he had an IFR chart opened up on his lap (it was also very dark.). He assured me that we crossed right over the NDB and we should be picking up the VOR soon, 100 miles from our destination. We were not picking up either the VOR or the NDB despite our ETA.

I was getting urgent ETA requests from the two nurses in the rear and I started searching out nearby NDBs and attempting to make radio contact with possible overhead airline traffic. At about the same time I realized that we were picking up an NDB far to the north and west of our destination and turned us 90 degrees to the south. Shortly afterwards, a just-departed 737 called us on 121.5 (a radio search had begun).

I informed them that we had turned south and expected to get a signal shortly. A very sarcastic voice suggested that I should climb higher after inquiring about my altitude. I decided that my painful head cold was a lesser issue and acknowledged his suggestion with obvious embarrassment.

We soon picked up the VOR/DME; we were almost 100 miles off course and past our ETA. I was then informed that our destination was below minimums and our alternate was another 45 mins south, with questionable weather.

I acknowledged this and, stressing that I was a medevac, said we would be attempting the approach and to please turn the lights up bright. At 200 ft AGL, I was blinded by the runway lights and quickly called for them to be dimmed. A very smooth landing was requested by the nurse (like I needed added stress!) and I actually greased it, thinking I just averted a medical disaster. I learned later that the bedpan was chock full…

I told my boss that I was done for the night—he wasn’t happy—took my deserved violation phone call from the tower and then went to the hotel for badly needed sleep. The baby was delivered and reported to be healthy.

After Marten Hartwell had crashed many years earlier on a medevac in this same area, nurses were mandated to carry a large and heavy survival kit. As I had two nurses, two pilots, and a stretcher patient in a six-place, underpowered twin, I had to strongly urge that one kit be left behind or only one nurse could come. It was not lost on me that I then proceeded to fly off course like Mr. Hartwell had done that night and he wasn’t found for over 30 days. Erik Vogel
Erik's start was in 1980, flying right seat on a de Havilland Twin Otter, where he logged almost 1500 hours. This enabled him to fly again part-time as a first officer in the late 90s on a local commuter airline that operated a harbour-to-harbour service—while he was also employed in his new career as a firefighter. This lasted three years, until new management brought a return to "old style" pressures and he quit commercial aviation once again. He recently renewed his medical and is enjoying recreational flying now in a friend's Piper Warrior. He has just over 3000 hours total time.

Come fly with me: life as a Forward Air Controller in Vietnam

When a simulated emergency becomes all too real
Scroll to top