Blog - Latest News
You are here: Home1 / Article Archive2 / I was there3 / From Africa to America in a DC-3 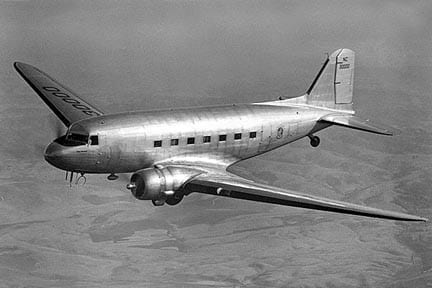 Forty plus years back, this pilot had the opportunity to fly as co-pilot on a ferry trip from Africa to the United States, and it was quite an interesting experience. The mission was to go and get a DC-3 that had been used on a contract for oil exploration in the Sahara Desert. The airplane had been sitting for months in Niger, West Africa, and needed to be returned to the USA. Sounds simple enough but, not so fast. There were details to be dealt with that were not yet known.

To start with, the process of getting a visa back then for entry into Niger was to be a three to four week process at best. But, a few phone calls later and it turns out that if we airline to Paris, then the visa process will only be three days. So, off to JFK to catch Air France to Paris.

It turns out that the three-day wait for the visa is, in fact, the case, so three enjoyable days are spent in Paris. No shortage of things to do there. Then, it is off to Niger and the real fun began.

The flight to Africa on Air Afrique was a sign of things to come, including wine for the pilots.

The flight from Paris, on Air Afrique, was an all nighter, about five hours or so, arriving there at dawn. It was a stretch DC-8, completely full, and the two ferry pilots were the only westerners aboard, which was a bit of a culture shock, as we saw people preparing their own food, something we were not used to seeing on a commercial airliner. And I recall a couple of oddities about the flight. I noticed the French crew had wine with their meal–the pilots, that is! And on arrival at dawn in Niger, on exiting the aircraft, the passengers removed and took with them anything that was not bolted down.

I felt as though we had stepped back in time as we cleared customs and immigration. All the floors were dirt, there were no doors anywhere that I could see, and clearing customs for us was done quickly, except for the part where we had to go and see the “supervisor” and try to explain why we were there. I don’t think we ever did understand each other as to what was being said, but after showing a $50 bill, we were quickly stamped and approved out of there.

Then the cab ride to the hotel downtown, and at least for me, having never been to Africa before, the sights and activities going on during the ride to town were, in a word, interesting.

At the hotel, we started the process of contacting those persons we needed to see about the airplane, and then fell into what I would describe as an expatriate atmosphere of embassy people, oil industry types, and other roustabouts, where all day and night it seemed the bar was open and the gin and tonics never stopped flowing.

We were informed by the embassy people, at the bar, that there was a serious issue with the airplane. It seems the prior crew that flew the DC-3 into Niger several months earlier, had run afoul of some regulation or other regarding the FIR boundaries, and the authorities wanted to exact a penalty on someone, and it may as well be us, because here we were to get the airplane!

Those talks later with the airport authorities took a while, and after we were several hundred dollars lighter, all was well, and we were cleared to test fly the aircraft prior to departure for the USA.

But before we could fly the DC-3, we had to get the keys and logbook from another person loosely connected with the airport authorities. I spent hours trying to find the guy at home in the residential part of the city, and finally did find him. More culture shock for me. I am in a house, or hut, with no furniture, with numerous children and goats about, and a NY Yankees poster on a wall. After more money exchanged hands, I had the keys and logbook, and headed back to the hotel and more gin and tonics with the steaks and the stories from the interesting people one finds in a place like that.

Bring a DC-3 back to the US from Africa? No problem.

Now, the fun began. Fueling and filing a flight plan took about half the day. So much for trying to get airborne before the temperature climbed to 120 degrees or so. But, we did get airborne for the test hop, which went surprisingly well considering all the issues with an aircraft that had been sitting for months. Of course the visibility in dust or haze, with that heat, was practically nil, maybe a mile or so, and in a desert environment, with a little extra effort we did get back to the airport ok.

So, the ferry part of the trip finally begins the next day. Since this DC-3 is a six tanker, holding as I recall 1200 gallons, we planned the trip through the Azores rather than through Europe, and, with light summer winds, things should work out fine.

The first leg, to Las Palmas in the Canary Islands, was over desert, and mostly done by dead reckoning, that is, compass and clock, as there were no land features to see, and no long-range navigation gear aboard or other navigational aids to use. But there were the occasional string of camels and nomads down there, many hundreds of miles from any type of town or village. I could not figure out how they could survive out there in that barren desert, but obviously they do.

I did think that this might not be the best place to have a forced landing. Then later, there were the occasional derelict tanks left in the desert sands from earlier battles in WW 2. Could not tell whose they were though.

Arriving later in the day in the Canary Islands was welcome after all that time over the barren desert. The next day, after checking the weather in the office, where there was mention of a low pressure system coming across the ocean, but far away, off we went to the Azores, navigating by ADF only, with a large stretch in between with no signal at all. The problem with this leg was the magnitude of the correction angle to hold the track outbound.

With no satellite pictures to see back then, the tropical low had apparently speeded up and was closer to us than we had been led to believe, bringer much stronger winds. But, hold the large correction angle until the signal fades and after, until the next beacon is picked up much later. Finally, the signal from Santa Maria comes in, and we are off course, but do correct back and arrive there making an instrument approach in the rain. I recall the tower saying we were well overdue on our flight plan and they were concerned.

With only VHF radios, we were out of communication range for most of the flight. We did not anticipate the stronger winds from that approaching low pressure system that was not expected until much later. Of course back in the late 1960s, navigation was a lot different from today’s GPS world.

To make the long flight from the Azores to Newfoundland, light winds were required.

Three long days are spent at Santa Maria waiting for those pesky headwinds to calm down enough for us to make the next leg doable, which as I recall meant no more than 35 knot headwind component. Then, off we go to St. John’s, Newfoundland. About an hour out, the right engine starts showing signs of fluctuating oil pressure, so we request to land at an Air Force base along the Azores chain to check out the engine on the ground.

While the military people there were helpful to us in troubleshooting the problem, the brass was none too happy and wanted us out of there pronto. A few hours later, topped off with cheap fuel, off we went again, but this time pushing the clock if we wanted to arrive in daylight and before the forecast fog sets in. St. John’s is a place where fog is common and to be expected.

Droning along at 8500 feet with a cloud layer below, we dead reckoned for hours, compass and clock, until we pick up the beacon of the ocean station ship that is positioned further along our route. Sure enough, their signal is there, and welcome voices from the ship to talk to. And we are roughly on course to boot. No low pressures about to muck things up again.

We arrived at St. John’s just at nightfall, requiring an approach to near minimums as I recall, and a much needed dinner and rest. I do recall the airport weather going to near zero conditions later, and hearing a light plane making landings and takeoffs. I asked about this, and was told it was a student and instructor out practicing approaches. But in that visibility which seemed nil to me, I was amazed they were out there.

The next day, a bright and clear day, off we went to Bangor to clear US customs. On arrival, all seemed to be going along OK with customs, considering the aircraft had been overseas for over a couple of years, until one of the inspectors decided he needed the original purchase paperwork for some of the old electronic equipment (non-aviation) in the cabin. Of course that paperwork was not aboard, so now began the standoff with customs. We were in a Catch-22 situation. Find the paperwork and or pay duty on it (we did not have enough cash), or go back to Canada. Oh boy, welcome home. Eight hours or so later, after many fruitless phone calls by us, the customs people gathered to leave the airport and go home. When we asked what to expect the next day, they said, “Oh, you can leave now–we are through with you.” Thanks so much for the heads up!

The next day, arriving at Philadelphia Northeast airport via a back course approach in the rain, again, we were finally home. I couldn’t help thinking that while this trip for me had been very interesting and challenging to say the least, and one that I would not soon forget, the airplane itself would soon be off to another third world country on another contract, and would be making memories for other pilots probably until she was retired, whenever that would be.

The new “killer items” for IFR pilots
Scroll to top