Blog - Latest News
You are here: Home1 / Article Archive2 / I was there3 / This time, it’s cucumbers from the Bahamas 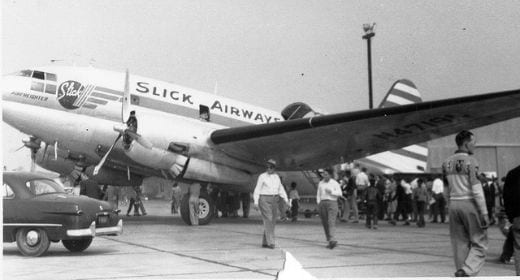 In his last Air Facts article, veteran freight pilot Jeff Tait shared his experience flying eggs to Venezuela. In this story, it’s cucumbers from the Bahamas to Florida. Ever think about how those cucumbers end up in your grocery store? Jeff has.

Cucumbers. Lots of them, tons and tons of them really! It was the winter of 1968, flying an old war horse Curtis C-46, N4719N, hauling cucumbers from Andros Island, Bahamas to Fort Lauderdale, Florida. Two hundred bags of cukes at 60 pounds each, 12,000 pounds per trip. Two trips per day sometimes, unless loading, unloading was too slow, not uncommon in the Islands, and then it was one trip a day.

This was pretty heady stuff to me, a relatively inexperienced pilot of two years, flying co-pilot on this big beast. Two thousand horsepower Pratt and Whitney engines, big three-bladed Hamilton Standard props, screaming loudly on takeoff pulling 52 inches of manifold pressure from those R-2800s. Wow, were they loud on takeoff. I don’t want to know what the decibels were, but talking was out of the question on takeoff. Shouting was what we did. There was no working intercom. And we wore headphones, not headsets like today.

But that was what you expected flying those World War II-era cargo haulers. Dumbo, Commando, the Flying Coffin, whatever the nickname, that C-46 was a real workhorse. Handling on the ground, though, was another adventure, or could be. Hands and feet were usually pretty busy; rudder, ailerons, brakes, differential power, all routinely came into play on landing. Who knows how many bounces this C-46 had endured in the 25 years it had been in service? Loaded and overloaded countless times since the early 1940s, when “war emergency” loads were permitted, heavy loads and rough strips were its forte. But now it is the more sedate flying of cucumbers, day after day, from Andros to Florida, making a living.

Then one day in early February, the native workers at the farm on Andros Island decided they would stop picking and loading cucumbers and walked off the job. But with plenty of fields yet to pick, a crop was about to be lost unless some new workers could be found. This was a real dilemma for the importer. Something had to be done, and fast.

Sure enough, within a day, a solution was found. We would fly a DC-3, N64424, configured with 32 seats, to British Honduras and pick up 30 Mayan Indian migrant workers and fly them to Andros Island to continue the cucumber harvest. Of course, there was one small problem. I had never been aboard a DC-3, and the pilot, my father, had not flown one since the 1940s when he flew them during World War II on the pioneering routes from the US to Europe through Greenland and Iceland and Ireland. But, this was cargo flying 1960s style, and after a quick checkout and three takeoffs and landings, we were set to take off for Belize, British Honduras at midnight.

We decided to take along a couple of flight attendants to assist us and help with the 30 passengers, who were to be Mayan Indian women. So, who better to help out on this trip, but my wife and my mother? It was to be a real family adventure! We packed up a fair amount of snacks and drinks for the trip and set out for the Fort Lauderdale airport for the trip and the midnight departure.

Sitting at the end of Fort Lauderdale runway 27R, ready to go, we find that many of the cockpit lights and instrument lights are inoperative. Having flown the aircraft earlier that day, who knew the lighting situation was this way? So, with flashlights for needed illumination, up went the power and off we went, non-stop to Belize. Direct to Key West, then taking up a course to skirt the western end of Cuba, then a new course on down to Belize.

Droning along at 8500 feet, passing the Florida Keys, and then it is pitch black over the water, no horizon, no moon as I recall, and complete silence on the radios. Just the hum of the engines and propellers, and the occasional flash of lightning from the nocturnal thunderstorms pounding away at the Gulf. Almost mesmerizing really, droning along in the pitch black over the Gulf, flying on the compass and clock, aircraft trimmed just right with only the occasional elevator trim wheel to adjust as we got lighter.

Cuba was occasionally visible during the lightning flashes, and seemed quiet, desolate, and benign. But it was not always benign as I recalled being in this same area just a few years earlier. Then, I was a crewman aboard a submerged US Navy submarine, diesel-electric type, tracking Soviet submarines into and out of Cuba. Those were tense times. Silent running, tubes loaded, and all that. All hands were at full alert and ready for whatever may develop. The Cold War was anything but cold from our perch at the time. Looking at Cuba through the periscope then, and seeing the same land again during the lightning flashes, flying at 8500 feet a few miles away, these were two different things. I thought about these things as we flew through the night en route to Belize and our waiting passengers.

Ever wonder how those cucumbers make it to your grocery store?

After about six hours, we arrive at Belize and land at dawn. It’s a quiet place as we come lumbering in, shattering the peaceful ambiance of the place, scattering a few chickens that until a few minutes ago had the place to themselves. Surprisingly, things go quickly and well, no hitches with customs or immigration. Just pay and move on. We have to pay the fees in cash, file the flight plans, fuel, cash required again, and load up the Mayans who are here ready to go.

But, there is a bit of a discrepancy here.

We were told our passengers were to be 30 Mayan Indian women, weighing about 110 pounds each. Here were the 30 passengers all right, but they were men! Calculating the new average passenger weights, we were just at maximum weight for takeoff, maybe a little more. But with the conditions we had, temperatures not yet too hot, flat terrain, over water just after departing to the east, and no obstacles to contend with, we were confident in the departure.

After departing, having used the entire runway available, we turned left over the water and headed on course for the western end of Cuba a few hundred miles away, climbing to 7500 feet, and then later a planned course change toward Andros Island. This route would take us about midway between the Cuban coast and the Florida Keys, outside of the ADIZ. There had not been time to arrange for Cuban overflight permission. I called Belize radio, asking them to activate our flight plan and we were on our way.

The weather was pleasant along our route, and taking an occasional ADF bearing off the left wing showed we had a decent tailwind, which was important because there was no fuel available at Andros where we were landing. Hours later, approaching Cuban airspace, we called Havana radio to update our position and were told they had no flight plan on us, did not know we were coming, and what were our plans?

Our flight plan had apparently never been forwarded, or the Cubans were not being cooperative, we didn’t know. Explaining our flight plan the best we could considering the language difficulty, we pressed on and rounded Cuba, asking Havana radio to forward our flight plan to Miami radio. They didn’t do it we soon discovered.

All seemed to be on track as we cruised along. Passengers were mostly asleep, weather was clear and the ride was smooth. But then, we were advised from the cabin that we had visitors coming up the sides of the aircraft from the rear! What? Then outside each side cockpit window appeared two US Navy F-4 Phantoms! They had their gear down and were flying at a high angle needed to match our slow speed of 160 knots. They were very close; I could see the pilots well and as they rocked their wings, so did we.

We tried in vain to raise them on emergency frequencies and others, but could not communicate by radio. Also, neither could we raise Miami radio. So, after a few minutes of scrutiny and escort, the fighters peeled off with trails of black smoke and were gone.

Or so we thought.

A few minutes later they both came screaming past, close in front of us at a high rate of speed, and then were out of sight. It was amusing to us, and I think the passengers thought it entertaining, though I was not too sure about that. Later we learned that the Navy was on alert for unidentified aircraft because not long before this, a Cuban MiG pilot had defected with his aircraft to the US and landed at Homestead, I believe.

After the five-hour flight, we arrive at Andros Island to deliver the workers. Again, as occurred at Belize, the customs and immigration went quickly and smoothly. We soon departed for Fort Lauderdale, arriving there in late afternoon. We were a tired and weary crew after an 18-hour trip, and ready to head home for a good dinner and rest.

The next day, we were off again in the C-46 to haul the cucumbers from Andros, and sure enough, the product was there ready to be flown out. It’s nice when things work out as planned.

But the story had not ended yet.

A few days later, I was at home in my driveway washing the car, a VW. A large dark sedan pulled up and two men in suits got out and came over to me flashing gold badges. I never did figure out who they worked for, FBI or wherever, but they were very interested in knowing if I was the pilot who had flown in a DC-3 a few days ago, and landed at Andros Island before coming into Fort Lauderdale. I explained the radio problems we had experienced and so forth on the trip up from Belize. They seemed a bit befuddled and not sure what had taken place. So, without saying a word, they just drove off, and that was the end of it. I could only speculate why they were there.

And that was the end of this peculiar trip, finally. I have always wondered how those Mayans made out over at Andros and whether they get back home OK. But sometimes when I see piles of cucumbers at the grocery store, it causes me to think fondly about that trip from long ago.