Blog - Latest News
You are here: Home1 / Article Archive2 / I was there3 / Memory flights – sometimes you just know 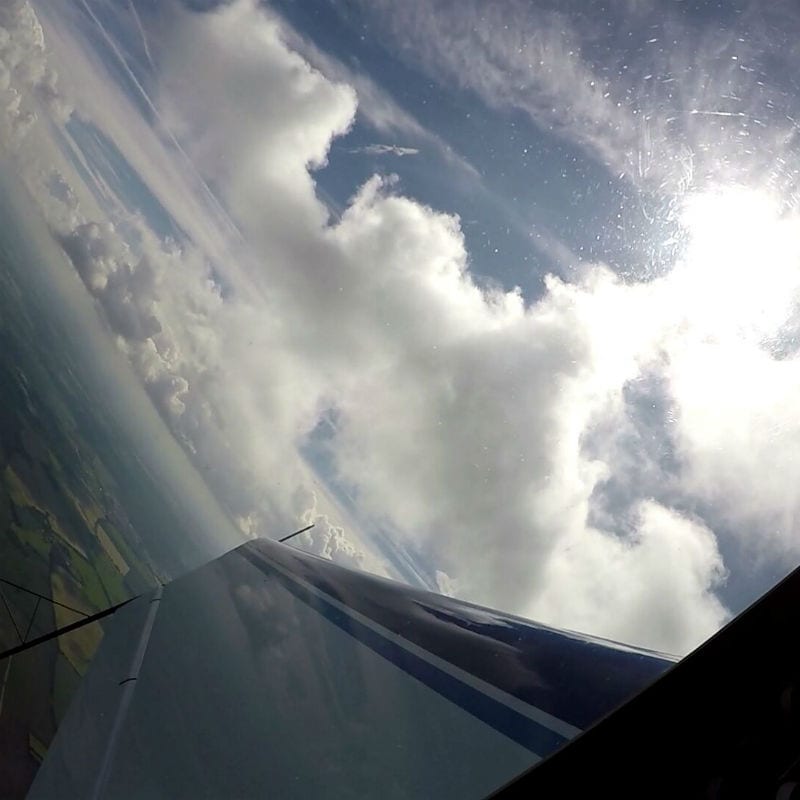 Every pilot has what I call “memory” flights; flights which were remarkable, special. Flights which, over a lifetime of aviating, plot the unique course of who we are as pilots. Often they are our firsts: first solo, first flights with family; perhaps our first emergency. Sometimes they are remarkable because of the aircraft, or the setting, or the weather.

The thing about these “memory” flights is that often we don’t know we’re experiencing them, that they’re shaping us, until we reminisce some time later. As Steve Jobs observed, you can only join the dots looking backwards. You don’t always have to look back, though. Sometimes you just know that you are flying one of those “memory” flights.

This airplane was made for one purpose.

I had travelled to the Cambridge Aero Club to try a course of aerobatics to see if I could get the wonder of looking up at the ground to overcome my feeble stomach. I knew from my previous experience of rolling upside down that I was going to find the course physically uncomfortable. At the same time, I had a feeling that if I could somehow overcome the apprehension, the wooziness, the clammy hands, the dry mouth that the reward might just be worth it.

And that’s how I found myself strapped into the front seat of the fastest, most powerful machine I had ever flown, climbing over the spires of Cambridge at an angle that left me speechless.

I had seen pictures of Extra 200s, but had never been up close to one until the morning of this flight. It is a compact little machine, about the same length as the Luscombe I fly, but ten feet narrower. It sits low to the ground and, although it is purposeful-looking, it manages also to be pretty at the same time – like a dancer: elegant but muscular. That elegance was now whisking me across the sky like no aeroplane before.

Cambridge disappeared swiftly behind and we were still climbing with ease. It was a beautiful, bright May morning; a perfect day for wandering around in an aeroplane. It wasn’t ideal for putting the Extra through any sort of paces, though. We levelled out at about 2500 feet, but for safety, we needed to be a couple of thousand feet higher. A dense layer of cumulus lay scattered above us, chinks of aquamarine tempting us through to play. It was a sky full of what my instructor called “suckers gaps” – holes in the cloud just big enough to lure you up on top but are just as likely to close behind you.

As we cruised around looking for a gap big enough to play in, Anthony handed cover control. “Okay, I have control,” I replied as I placed my hand on the stick. Whoa! Even the slightest touch on the stick sent the Extra nosing around the sky. Anthony made knowing noises behind me: “The very lightest of touches is all you need.”

I was clearly not the first to have been surprised by the responsiveness of this machine. In our early training as pilots, our instructors spend a good deal of time encouraging us to loosen our grip on the controls. Aeroplanes know how to fly, all they need is our thumb and forefinger to guide them. I suspect even a thumb and forefinger is too much for the Extra. The movement of my thoughts from brain to fingers seemed to be enough for this aeroplane. It just seems to know where you want to go. It didn’t take long to get the basic feel for “mind control” machine – and I liked it, I really liked it.

As a student, you sit up front in the Extra. The engine cowling falls away from your sightline and sitting so far forward, there’s not a lot of wing in your peripheral vision. It has a one-piece canopy and, with no window frame interrupting your view, you are basically flying around with a head full of sky in every direction – when you’re upright.

With almost nothing appearing to be between you and the sky and the aeroplane’s mind controls, the Extra really did feel like a magic carpet in the sky. I wondered how I could ever go back to the Luscombe. I wondered whose thoughts were controlling who? Was I controlling the Extra or did the Extra now have a grip on me?

We found a gap.

It wasn’t big enough to climb through, but it was big enough to climb up to play in. We started some basic handling. We started with climbing and descending, practicing steep turns and avoiding the soft walls of cumulus that rose magnificently above us. Watching the cloud arc past our wings, blue to the right, the lush Cambridgeshire fields off the tip of our left wing.

Looking up at the ground – now this is fun.

We were playing with the sky. Almost cloud surfing. The beauty of it all was almost too distracting. I knew right there, in that moment, that this was going to be one of those flights I would never forget. I could almost feel the synaptic traffic writing the memories.

I re-engaged my learning brain as we examined the Extra’s stalling characteristics, which were perfectly mannered and the clearest example I have ever had of what happens when a wing stalls.

Our playground was signalling closing time so while there was still space, we turned 180 degrees and Anthony demonstrated the classic barrel roll. It was too much for my learning brain. I just let the colour and light in. This was flying as it should be. Like the first time in the sea when you realise you can slow somersault underwater, somehow avoiding the earth’s draw, letting the shadow and sound captivate.

One more turn, one more maneuver. My instructor lowered the Extra’s nose, built up a little speed and pulled up. I felt heavier in my seat; the canopy turned blue with sky and I glanced to the left, to see clouds on their sides as we passed through vertical. I felt lighter now and looked up to see Cambridge glide across the canopy and I followed the countryside till the fields and roads were now over the nose and we were heading downwards. Squeezing against the G-forces as we pulled level and then released when the horizon returned to where I was used to seeing it.

I was frazzled and transformed as we descended from our little aerial schoolyard. Physically I was still perturbed but mentally I was enchanted. Anthony handled the landing and I reluctantly accepted responsibility for taxiing us safely back to the aero club, wishing I had longer legs to reach the rudder pedals. Shutting down, I welcomed the rush of air as we opened the canopy. It may add to the magic but the greenhouse effect of the plexiglass didn’t add to my comfort. Stepping off the wing, I opened my flying suit for a little more cooling and turned to face the patch of sky we have just been.

I knew right there this had been one of those special “memory” flights; that I will never forget my first flight in the Extra; that this will be a flight I think of when I reminisce about the beauty of flight. Walking, ever so slightly wobbly, back to the cool of the club-house I also knew this:

My body may not be built for aerobatics but my heart is definitely made to fly free.

From Africa to America in a DC-3
13 replies

Seven things I know about flying in Illinois
Scroll to top