Blog - Latest News
You are here: Home1 / Article Archive2 / I was there3 / Two procrastinators in a plane – a father/son story 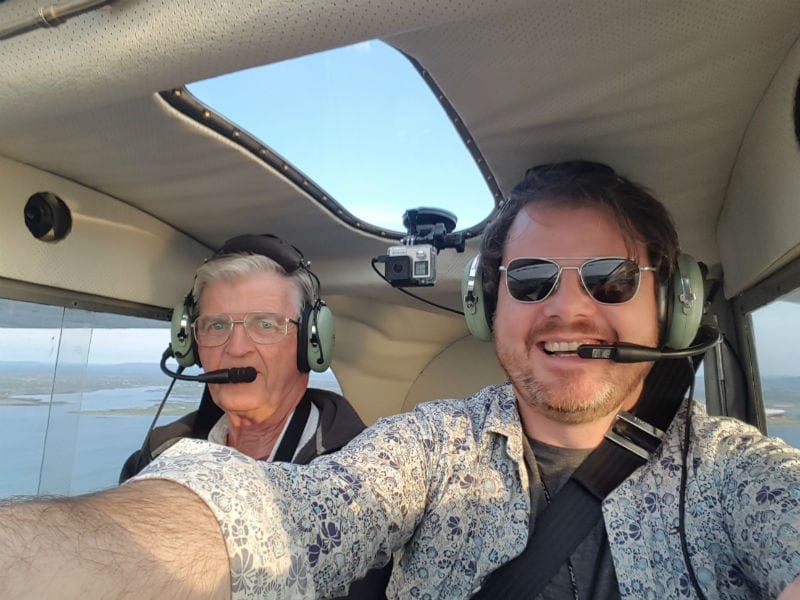 I finally got around to bringing my dad flying this past June. The irony that it took over six months to write this piece is not at all lost on me. After all, it was over 10 years since my dad last saw me at the controls of an aircraft. That was a sunny May in 2007 when I landed as a student in Abbeyshrule on the first leg of my qualifying cross country. I had told my family that my cross country was on the cards and so my Dad, camera in hand, took time off work and made the trip to Longford. I suspect my late mum, despite her confidence in me, just wasn’t wasn’t going to risk being a distraction but I’m also guessing she tried to dissuade my dad from coming to see me. This time I’m glad he persisted.

Why did it take so long to do this?

My arrival at Abbeyshrule after a go-around was pretty rough. Rough enough to have me questioning myself and onward flight. My next leg was to be in unfamiliar geography. If I couldn’t land the little yellow Grob in a competent manner did I have any business trying to complete my navigational exercise? My dad crossed the quiet airport’s tarmac to greet me. My face must have said it all: disgust, disappointment, frustration. He welcomed and praised but knew, as parents do, to give me space to lick my wounds. That support and space was just what I needed and the rest of the day was a satisfying success.

I’m not entirely sure how we had not flown before. It certainly wasn’t a lack of faith on either side. While we have the usual father-son huffs and disagreements when DIY-ing together and frequently have differing political and social views, I trust absolutely that as a passenger he’s never going to undermine me or jeopardise the flight. I also know without fear of parental scrutiny that he trusts me absolutely to look after anyone in my care.

I think part of the reason we hadn’t shared a flight before is is simply a lack of communication and misunderstandings. I won’t nag him, or anyone, to come flying and he won’t pester me to take him flying. So, outwardly it looks like I’m not too keen and that he’s not too interested; neither of which are true. The reality is that I’m quite happy to share but sometimes need to be reminded to offer – as Domestic Head of Operations will gladly attest, while rolling her eyes. Couple all that confusion with the general disability of the pair of us to get around to doing anything and that’s how you get to a June evening, nearly 10 years after my skills test, when father and son are finally ready go flying.

The coast of Ireland makes for some spectacular flights.

Despite being an active marathon runner in his seventies even my Dad struggled with the contortions required to get aboard the Luscombe. That speaks more to the Luscombe’s ergonomics than my Dad’s joints though. I am both modest in height and still reasonably bendy and I have never managed a graceful entry to or exit from this aeroplane.

Back in the 30’s I imagine the entrance layout was designed with the height and leg length of only one person in mind – the designers. While the Luscombe’s side-by-side seating is a more sociable way of sharing flight by comparison with the tandem arrangement in the Piper Cub, its snug cabin can disappoint those unused to light aeroplane. It’s not really the luxurious surround that people expect when you say you own an aeroplane. That disappointment disappears quickly once airborne as the trees disappear below you and your shadow grows small on the ground. Normally my headphones are filled with gasps of awe or wows of wonderment. My Dad on the other had was remarkably silent.

The Burden, a rocky area in southwest Ireland, makes for a great sightseeing flight in a high wing airplane.

He was worryingly silent. As a conscientious captain I checked in regularly making sure he was okay but other than him confirming all was fine I did quite a lot of the talking initially. I repeatedly commented on how nice an evening it was; how smooth the flight was; where the local landmarks were and why I enjoyed wafting around the sky. It wasn’t incessant jabbering either; I was just trying to create openings in what was mostly silence. He did comment that despite working with maps for years that he didn’t realise how rugged Galway really is. “Ah, he’s starting to relax now,” I thought, but then it went quiet again. We continued our aerial tour of North Clare, dawdling past Ballyvaughan and heading south over the Burren towards the Clare coast.

The silences began to shorten and we started to reminisce about Clare, wondering if we’d make it to the Loop Head peninsula from where my mum, his wife, had hailed from and where we’d spent so many formative family years. Sunset was shimmying across the bay though and we daren’t push our evening past Fanore this time – Lahinch, Doonbeg and Kilkee would have to wait. Turning home put my Dad on the coast side and he was able to recognise unusual houses he had designed in younger, leaner times. More at ease I thought, he requested a course change for some photography and I obliged with a little stick-and-ruddering to give him a better frame of the coast through the Luscombe’s open window.

Do views like this make you talk more – or not at all?

As he called out landmarks along our route I was beginning to realise that my Dad hadn’t been uncomfortable at all. He had simply been taking it all in, observing, getting used to the new perspectives and their surprises. Why had it taken me so long to understand it? Why was I surprised by my near tacit passenger; I sometimes do the same, sitting quietly, absorbing, only speaking to ask. Looking further back, despite my giddy desire to take to the skies, I think I too had been only functionally talkative during my very first flight. Do we ever stop learning about our parents, about ourselves and about how alike we are when we think we’re not?

We rambled back along the stratified rocky coast; my Dad making visual notes of the Burren’s lie and layers, of its sweeping curve and sun-warmed colours. I am sure I shall see some of this flight in his fine art degree homework in the near future. Having started art college with a scholarship long before I was ever a thought, my Dad returned to the vocation recently and will finally achieve the art degree set aside many years ago. I may rue the procrastination gene that I think I’ve inherited from him but I am continually inspired by the fact that age has never been worthy of being an impediment. He re-skilled in his 40’s, changed careers in his 50’s, started travel in his 60’s and is still running marathons in his 70’s. The pair of us may put off an awful lot until tomorrow but he has always instilled a belief in me that there is never a time to stop trying – anything.

There were hugs when we landed; of joy, of gratitude and definitely of pride It may have taken years to get around to bringing him flying but perhaps the experience was richer for it or perhaps that’s just an excuse for more procrastination. I emailed the selfie of us flying together the following day. Still not entirely sure of how enthusiastic he had been, I tentatively asked if perhaps he’d go flying again. His response was typical:

“Ready to drop everything anytime. Driving home last night wondering was I too old to get pilot’s licence.”

Beginnings are the start of everything.

Teaching flying over the years