Blog - Latest News
You are here: Home1 / Article Archive2 / I was there3 / Out of control – flying a vintage airplane in Ireland 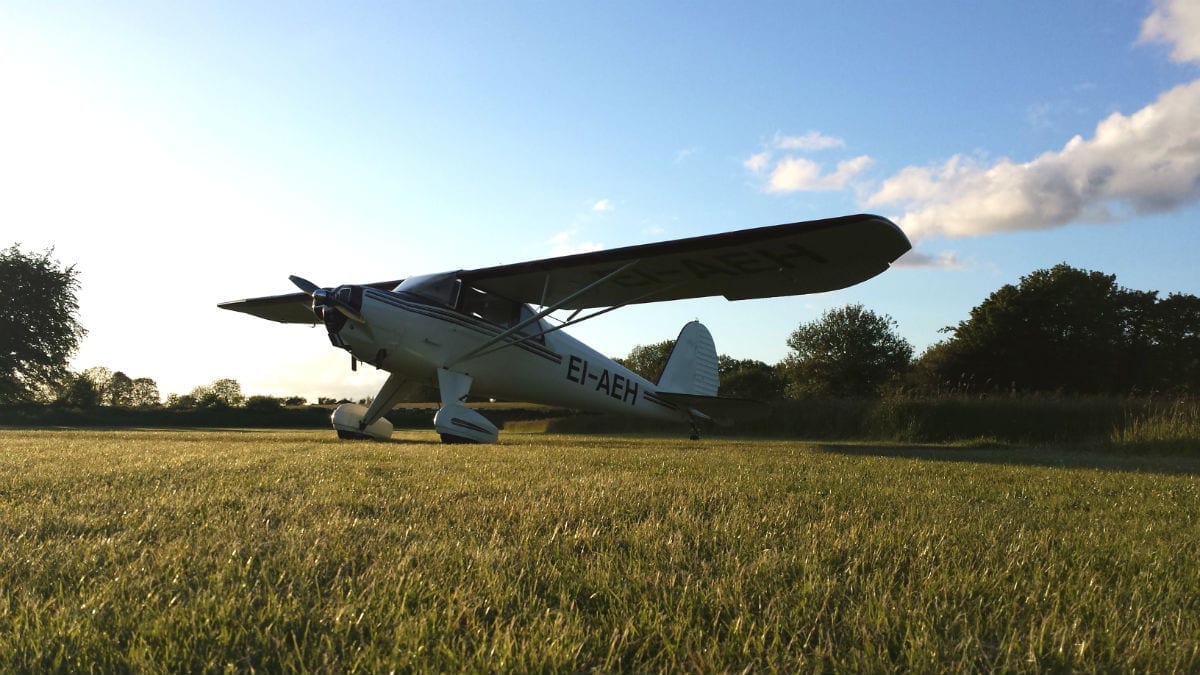 “Don’t you have to get permission from ATC or someone?” That’s the most common question I get when people discover I launch myself into the sky from a field. Confusion then turns to disbelief when I tell them “nope.” I usually let that little pot of incredulity simmer for a while; sometimes I’ll stir things with a “why would I need permission?” but then I’ll always lift the lid and explain that for much of the flying I do, there’s no need for ATC. People are genuinely surprised at the freedom I have. The idea that flight offers freedom never really crosses people’s minds. Commercial air travel means that a lot of people equate flight with escape – to holiday destinations and warmer climes – but they almost never equate flying with freedom.

Take off from here without permission from ATC? Absolutely.

Why would they? Flying with the commercial carriers is more a proposition of logistics than liberty. From the moment you arrive at an airport, you hand over control of your person and parcels in order to be containerized and dispatched swiftly and safely to where you’re going.

For the most part you’re isolated from the actual experience of flying altogether. If you fly with an airline that pays to use the airport’s airstairs, you walk straight from the Duty Free to your aircraft’s seat without even seeing the aeroplane. Apart from the safety briefing and the shove in back of your seat as the aircraft takes off, you’re blissfully unaware that you’re taking part in one of humanity’s great achievements. Magazines, food, in-flight entertainment, and tea in paper cups keep most people distracted from the magic that’s going on outside the window. On landing you’re herded efficiently to baggage reclaim and ultimately pumped out through the doors of the arrivals hall breathing in the fresh new locale feeling like Andy Dufresne as he emerges from the ditch

For those lucky to fly small aeroplanes out of rural fields in the West of Ireland, flying feels nothing like that. Arriving at our little airfield feels more like the closing scene of Shawshank Redemption, where we find Red reunited with Andy, tending to his vessel at some remote idyll. Through the farm gate, there’s a gravel track that parallels the grass runway. It’s bumpy and dusty and it’s a continual battle to keep the potholes in check, but it leads to a little patch of heaven – to a sort of launch-pad to freedom.

At the end of the track is the hangar and a small cabin that the elder wits refer to as the “Old Pilot Day Care Centre.” On a sunny evening, someone will usually be out tending to their vessel at this idyll or getting ready to commit aviation. Around here it’s a case of get busy tinkering or get busy flying… or else put the kettle on.

Here there is no queue for boarding cards, no rushing to fill seats, no ATC slot times to meet, no timetable to fulfill. Is there water in the kettle? Is there milk left? These are the biggest operational concerns at this airport.

“There’s not really much more to do other than go flying.”

Despite the apparent nonchalance, safety is still a priority before we think of doing any sort flying. I go through the same sort of ground checks your Ryanair or Aer Lingus crew do even though my little Luscombe is a much simpler machine. Oil and fuel levels are checked and every surface, hinge, cable and wheel are inspected for wear. The Luscombe, like most small aeroplanes, is light enough to move on my own but since there are friends around I borrow a pair of hands to help me push the aeroplane clear of the hangar and the other aircraft parked outside. Other than the cockpit checks to get started, there’s not really much more to do other than go flying.

Startup checks complete, I line up on the runway and increase the power. As grass runways go, ours is lovely, but for those who have never flown like this, the aeroplane undulates, rattles and bounces a little and in just a few seconds we are airborne. As we climb away from the freshly-mown grass, the Luscombe’s shadow appears to fly briefly in formation below us until we peel skyward.

We climb straight ahead for a little while I decide: left for Lough Derg or right for Galway Bay? The hills of south Galway and east Clare sweep cool and shadowy to the south, but I am almost invariably drawn to the light of the evening sun. I bank right, “Galway traffic, Echo Hotel airborne out of Craughwell, south of the field routing towards Galway Bay.” There is no ATC in Galway anymore, but it is the local custom to make a call on the old tower frequency to announce your arrival in the playground.

It was cool in the shade of the hangar, but up here at 1500 feet, heading west, the evening sun fills the Luscombe cabin and I fly straight and level for a few minutes, basking in the glow. I don’t know if it’s the warmth of the sun, the beauty of an endless Atlantic horizon or just the sense of being free of the earth but it’s an utterly cathartic experience.

After a little bit of wandering to wherever, our curiosity takes us to a tete-a-tete with the clouds and the Luscombe and I head for home. When the Luscombe’s wheels are reunited with their shadow on the grass, there’s no recorded fanfare or applause; no onward travel announcements, no warnings of errant overhead baggage. We just taxi slowly back to the hangar and shut down the Luscombe’s mighty 100 horsepower engine. It’s been a half an hour’s travelling and we’ve ended right back where we started – in a lush green field, not a control tower in sight; where flight is freedom and the tea is served in real cups.

From Africa to America in a DC-3
13 replies

It was more than adventure
Scroll to top