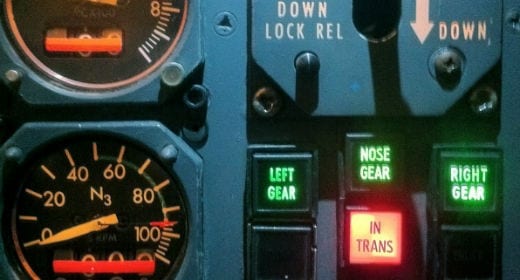 Recently my memories of earlier days were rekindled during a chat with a friend regarding wheels-up landings. We were discussing my own misfortune of last year of having to land on two wheels in my Twin Comanche – the right main wheel had not locked down.

Our discussion included my recollections of my time with the Royal Air Force Central Flying School flying the Folland Gnat – one of the highlights of my aviation career.

It emphasised to me again, no matter how often you fly and how long you have been doing it, there is always something to learn, particularly in a demanding aircraft, as was the Gnat in an engine-out forced landing.

The Wirraway, where an important lesson was learned.

But the incident I had in the Gnat was spawned many years before during training for my RAAF “Wings” in a Wirraway Basic Trainer; almost identical to the USAF T-6.

The flying program showed a progress check with the CO. In those days we were always having our progress checked. The “Hate Sheets,” AKA Training Records, had the P-A-T assessments, short for “Progress, Attitude, Technique,” written up after every instructional flight.

Progress was mandatory, as was attitude. If you did not have the right attitude you would be suspended from course and re-mustered to a ground job. The right attitude had nothing to with standards as sometimes accepted these days. It meant discipline and training as an officer and that meant ability, one day, to command and lead those for whom you would be responsible.

But that went right over our heads. All we wanted was to be fighter pilots and dreams of other ambitions had yet to materialise.

The Wirraway aircraft was the Australian version of the American Texan T6 and I had not gained my wings and was about half way through the course.

“OK Baston, just start up, take off and we will see what aerobatics you can do and then some forced landings and some circuit work.”

The CO was an ex-Korean War veteran, medals all over and a legend to us all. Later in my career I learnt even more and gained greater respect for what these brave people had done before us, in actions that give us the freedoms we have today.

“Trim; rudder three o’clock; elevator 11 o’clock. Mixture Full Rich; Pitch Full Fine; Fuel – Ki-gas locked – Mains selected and sufficient” – and so the mantra was performed and the words like a choir were recited.

Not a bad well-judged forced landing I thought to myself. In my mind I was hoping for an “above average” assessment but the chasm of despair was soon to present itself. “OK Baston. Assume the weather has deteriorated and it’s getting dark. Show me a bad weather low level circuit.”

I think, “No Worries” – such is the ignorance of youth.

In those days , for better or worse, the first priority was find the runway and complete a timed circuit with much head out-of-the- cockpit required but also a touch of instrument flying, albeit in visual conditions.

Three green you say – but did you look?

Abeam the touchdown point; start the stop watch – time three times your height (300 feet = 9 seconds) downwind and turn base, still with the aircraft clean and no gear or flap selected until aligned on the short final.

“Base gear green” and cleared to land.

So I landed and not a word from the CO. Obviously I had impressed him and would go to the next stage of my training – the dreaded Instrument Phase.

“Taking Over” came the order from the CO as he brought the aircraft to a stop on the runway. “Now get out and I shall see you at the debrief in the crew room – and run, I won’t wait forever.”

The order was gruff and clear and we were about two miles (three kilometers) from the squadron and I wondered what was happening. Soon I was to find out!

I finally arrived, hot and exhausted, having lugged the parachute and flown for a full hour but I was grateful that the CO was waiting. I didn’t want to make him unhappy.

And then it was revealed. I was told in no uncertain manner that if I was to graduate the way to do it was not make automatic radio calls. They sound nice but if I was to call “Base gear green” then the gear should “damn-well be down… not up and locked as it was on your so called low-level circuit.”

I was mortified. Was I to be suspended? Given another chance or…?

As it was I did graduate and from that day on I have always, every time, in every aircraft I have flown – wide bodies or Cessnas – always had a “last-look” at the gear lights shortly before touch down.

RAF Fairford, with plenty of runway.

Fast forward 10 years and I was a CFS Gnat Instructor at RAF Base Fairford and about to convert an experienced pilot onto the Gnat. I was on an exchange posting from the RAAF and this was to be my first Instructor – Student job and would be a good introduction for me for the remainder of my tour training RAF pilots to be Gnat Instructors.

It was the second sortie where the profile was upper air work, some high speed flight and some supersonic advanced turning – strictly under radar surveillance.

The final segment was for forced landing practice and a couple of circuits would see the exercise completed for that day.

In the Gnat, the configuration for a simulated engine failure and seizure was to set 65% RPM and have the speed brakes extended. The speed brakes were in fact the undercarriage but only half extended for speed brake actuation. For realism it was also assumed no hydraulics were available, therefore, no flaps and the flight controls were in the “follow-up” mode – these days known as manual flight.

Another idiosyncrasy of the Gnat was when in the engine out configuration with no generator on line, only battery operated trim of the stabiliser was available and a flare could only be achieved if the stabilizer was kept in the green range of the Tailplane Indicator (TPI).

The landing gear on the Gnat could be used as speed brakes when half extended.

So a forced landing was a demanding maneuver where the aircraft was clean, a fast glide speed required, a limited landing flare capability was available with a slow, battery-operated stabilizer trim. Furthermore, it was vital to maintain the TPI in the green range to ensure the flare maneuver could be achieved.

From memory the “High Key” was 7,000 feet and accurate judgment in the forced landing pattern was an absolute necessity.

So here I was, a new instructor with very limited time on the aircraft but an awareness from my previous instructing time in the RAAF knowing that I needed to be very careful.

I positioned the aircraft approaching the “High Key” configured in “follow-up” flight control mode with speed brakes extended and with 65% RPM set. “Handling over,” I said and proceeded to monitor the TPI and the aircraft position while my convert flew the forced landing pattern.

Speed was a little high as we came downwind and I sensed a tailwind that had not been evident before. Turning base a little early I thought with the TPI on the full forward limit of the green range and then I noted the TPI went forward out of the green range so gave a clear instruction to trim it back.

My student was under stress and so was I but the approach was under control as we lined up on final – and as I had earlier briefed – “point the ‘broomstick’ at the threshold.”

The “broomstick” descriptor was the tongue-in-cheek name I gave the aircraft –just a touch of humour for my British colleagues… for that was how it seemed when flying the Gnat with the broomstick-like pitot tube pointing the way.

And flying the gnat and has often been described by others – “you don’t get in a Gnat, you put it on.”

That drag chute will help you slow down if you’re too fast – assuming the wheels are down.

We crossed the threshold too fast but enough flare capability to do a reasonable touchdown on the long runway at Fairford and stopping with a drag chute if needed was not a problem; and then as had been my normal practice for years I took a last look at the gear lights.

In a less than calm voice I can vividly recall how I shouted “Taking over” and stretched the glide in a prolonged hold-off as I slammed the throttle against the stop.

In those days the spool-up time on jet engines was long and the Bristol Siddeley Orpheus was no exception. At least I had started at 65% RPM, not idle, but as I held the aircraft off with the nose getting higher and higher and the engine slowly spooling up it would be pure luck as to what would occur first

As it happened luck was with me that day and I went on to complete my tour without any further incident… and while I no longer fly high performance jets, I still keep the habit of doing a last look in my little Twin Comanche for every landing.

I learnt about such things a long time ago – taught convincingly by my Squadron CO. No more automatic radio calls and no more long hold-offs or slamming throttles and testing luck for me anymore.

Into the eye of the storm
Scroll to top