Blog - Latest News
You are here: Home1 / Article Archive2 / I was there3 / A brief stop in Manila? An airline flight goes awry 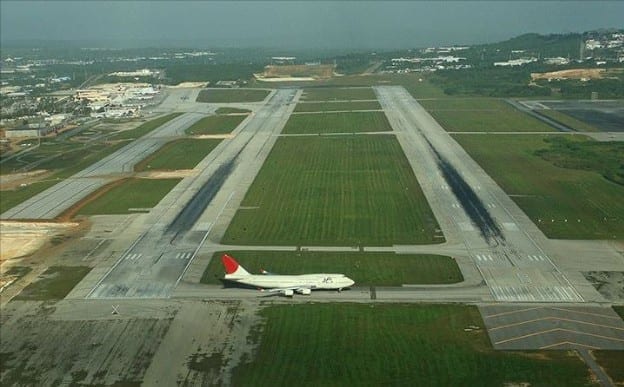 “Cleared ILS runway 6 left, call tower on 118.1.” Such was our clearance from the Guam approach controller following a smooth, uneventful flight on our way to Hong Kong via Manila. On board were the usual VIPs and government executives and we were on time, having a routine first sector.

With 8,000 feet of solid grooved runway, Guam’s runway 6 left was the longest runway of the two; runway 6 right being the shorter was sometimes used with a sidestep manoeuvre from left to right due ground traffic, but this was not the case today.

The Guam terminal was located at the far end of Runway 6 left, so on touchdown the use of full reverse thrust and wheel braking was unnecessary. I selected idle reverse, lightly touched the brakes to check normal operation, and coasted to the end of the runway.

Much celebration as we taxied to the gate and disembarkation started. Even though Guam was not the final destination, it was not uncommon to have such happy acknowledgements as we flew through various Pacific airports.

We departed Guam on time in good weather as we flew almost due west to Manila International Airport. The Philippines have had a disturbing history of political violence, with the airport often being the location of such events, but then those events were not as prevalent then as they had later become.

One of the most memorable events that occurred some years after our flight was when Benigno “Ninoy” Aquino Jr., a former Philippine senator, was assassinated on August 21, 1978.

A long-time political opponent of President Ferdinand Marcos, Aquino had just landed after three years of self-imposed exile in the United States. He was shot in the head while being escorted from the aircraft to a vehicle waiting to transport him to prison.

Tragic is the only way to describe it.

On this day, three years earlier (June 3, 1975), the Manila approach controller transmitted “cleared runway 06, call established, call tower 118.1 and reduce speed to minimum please.” I thought the reduction in speed was due to the close spacing of traffic ahead but we had no idea as we had not heard another aircraft on approach frequency.

Established on the localiser and tuned to the tower frequency of 118.1, we were surprised to hear a major emergency was in progress with a Philippines Airline BAC 1-11 on an emergency decent.

The BAC 1-11 managed to land, even with a hole in the upper fuselage.

A passenger who had marital problems had locked himself in the rear toilet and had just detonated a bomb. He died instantly as he was blasted through a gaping hole in the aircraft’s upper fuselage.

Having slowed to a minimum speed, we listened to the radio traffic as the BAC 1-11 was cleared to land in front of us and I was surprised again to see the aircraft was still controllable and intact. Our landing clearance came and as we touched down I saw the BAC 1-11 off the side of the runway with a gaping hole clearly visible in the top of the rear fuselage.

The surviving passengers and crew were very lucky I thought.

Taxiing to the parking area, it appeared for some reason the main terminal, as was normal, was not for us and we were marshalled to a separate hardstanding. I shortly realised the reason for this!

“Captain, there are two armed soldiers in a jeep wanting to talk with you,” our nervous senior cabin attendant said.

That came as yet another surprise and I wondered why armed soldiers were even here, especially as this was a major international civil airport and we were clearly a civilian operator.

I was to learn the reason very soon!

I sat in the jeep between the guards as we drove to a building complex on the other side of the airport—not the normal civilian gate area—and was then ushered to into a very large office. Here I was greeted by a small, uniformed, military officer sporting many medals and a sidearm.

A bit ominous now and I admit to feeling somewhat intimidated.

“You landed without a clearance,” the officer said… gruffly and sternly. My response was firm but courteous and I simply stated I had received several clearances: flight plan acceptance, high level airways clearance, descent clearance, approach clearance, and land and taxi clearance. I suggested the radio tapes be reviewed.

Cleared to land in Manila—but are you sure?

It was clear this situation was not progressing the way either of us expected and as there were more senior persons on board the aircraft—the Director of Civil Aviation and another senior government officer, the government’s Treasurer—I suggested to the officer, now scowling and quite belligerent in his body language, I be returned to the aircraft and he should discuss his concerns with the senior government ministers on board.

So I was returned to the aircraft and the Director and Treasurer left the aircraft to meet with a very unhappy officer. They returned about an hour later and I was wondering just what I had missed and the consequences of my mistake, whatever it may be. I also wondered if it was serious enough to cause my dismissal, as the delay had developed into to a significant embarrassment to all concerned.

The director called me to the VIP suite on the aircraft and briefed me. I should not be concerned as it was the government’s mistake where they had overlooked the requirement for the government to have sought a new clearance from the military as the Philippines were under martial law and the earlier bilateral government-to-government agreement was no longer valid.

Such are the scenarios where these situations can be avoided if better communication skills of all participants are better and that, at the time, I include myself.

But what now? The Director advised that we were all under arrest; the aircraft could not be moved until the government had applied for and been granted the correct clearances to conduct airline services under the martial laws that applied and that could not be completed on the day.

Your prison for the weekend: the Hilton.

So what did “arrest mean” under these bizarre circumstances? It was a Friday and as the various government and military departments would not be operating over the weekend, we were told we could stay at the Manila Hilton, our normal stay for overnights.  Once the paperwork was completed we could to anticipate a clearance but no earlier than the following Monday.

Simply stated: house arrest in the Manila Hilton and not permitted to leave.

Friday Night to Monday—arrested!  That sounded like a great idea to me so we spent a leisurely weekend at the Manila Hilton and, being unable to leave, we spent the time by the swimming pool, enjoying dining in the luxurious restaurants and coffee shops, and simply relaxing until the government completed the required protocols.

But the best outcomes of all were that I kept my job, we left on the Monday, and I received an unnecessary apology from the Director for the government’s oversight.

Night, mist, haze, and all that jazz