Blog - Latest News
You are here: Home1 / Article Archive2 / I was there3 / Not your typical bombing run 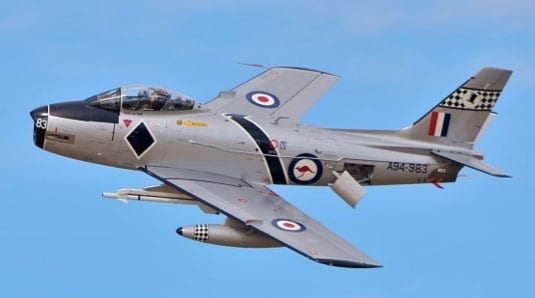 Our squadron, the RAAF’s No 75 Fighter Squadron, had been doing rapid deployment exercises for some time: fly from our base at Williamtown in New South Wales, through Townsville in Queensland, then on to Darwin in the Northern Territory. Darwin aerodrome is a memorable city in Australia, being the target of the first attack by Japanese aircraft in World War II. With the battle scars on the old hangars where the Japanese aircraft strafed, with little opposition from us, it has remained a lasting place in our country’s history.

It was here we conducted exercises and training for any possible threat from the north. At the time, our government was cautious as to the intentions of our northern neighbour – Indonesia – and so we were always kept at a high level of alert ready to convert from exercise mode to defend against a real threat.

A regular training route in Australia at the time.

Our Sabres were the latest fighters at the time. Supersonic, deeply swept wings with hydraulic-powered controls to ensure rapid manoeuvrability through the whole speed envelope.

They were equipped to deliver rockets, bombs and cannon but recently we had been equipped with the heat-seeking Sidewinder missile where targets could be destroyed at ranges in excess of five miles. Of course one had to have good eyesight to find a target at those ranges, especially at high altitudes where focussing was extremely difficult.

And so we navigated our way to Darwin and for the next few weeks we conducted our recurrent weapon training; air combat manoeuvres; bombing the range at Quail Island; multi aircraft simulated strikes on Gove and other targets – all to maintain our defensive and offensive skills at a the highest level.

As time came for us to return to Williamtown, our Commanding Officer, Wing Commander Des Murthy, a Korean War veteran, accepted an offer from the Base Commander, Group Captain Dixie Chapman, for a visit to the Bathurst Island Mission. The Mission was a Catholic-run school staffed entirely by nuns without any male support.

In fact, there was only one male resident on the island, who was on the island when the Japanese bombed Darwin. He was the person who alerted the Darwin authorities of the impending Japanese attack as they passed overhead the island.

Regrettably the advice was ignored.

Bathurst Island is 43 nm to the northwest of Darwin with a short grass airstrip adjacent to the mission. Our Sabres would be unable to land there and we were flown, courtesy of Dixie Chapman, in a Dakota to an amazing welcome of many school children who lined the airstrip as we landed.

The mission accommodated only indigenous children from all ages up to and including primary school level. We disembarked and several nuns, with small children clinging to their scruffy muddied-bottomed habits, escorted us to the school.

We took our place in a large room where the school choir sang a welcome song and later we were served afternoon tea. The dedication of the nuns and the reciprocal love from the children was obvious in the smiles and laughter of all the children and nuns.

A DC-3 flight to a grass strip to visit a school? All in a day’s work.

“Would you care for a short tour of the school?” Sister Francine asked. Sister Francine was to be our escort for the CO and me for the visit as other nuns escorted our squadron people as we toured the school offices and classrooms.

Sister Francine was all but 23 years of age and in her own words had chosen the life of a nun, “simply because I love God and I am here to do His work.”

Passing a small office where a nun was busy doing a stocktake we said a courteous hello. She went on to explain how they need to keep track of school books, stationery and all the administrative requirements like pens, paper and books that are always in short supply. Later, Sister Francine explained, “We are always short of the basics, but we make do and do the best we can.”

We left and flew back to Darwin ready to depart to Williamtown the next day with the admiration and wonderful memories of the Bathurst Island Mission fresh in our minds.

Back in Williamtown and “Ops Normal,” the CO called me to his office.

“You wouldn’t know, that as a Catholic, I have been supporting those in need in Africa for some time but now I have decided I should do something for those less fortunate closer to home. For your ears only, I have ordered twenty large tea chests for our own normal administrative needs, but we can also include school items for the Mission school. When we get the boxes filled we can have them transported on our Herc support aircraft when we next exercise to Darwin. What do you think?”

Such thoughtfulness; a man with compassion and a great fighter pilot leader to boot. Without hesitation my answer was clear: “Great stuff, Sir. Can’t wait to see it happen.”

About six weeks passed and our “Form Green Frag Order” came through – deploy ASAP – so off to Darwin again. We departed in our aircraft and the Hercules, with our loaded stores, came along the next day and as arranged by the CO there was a Dakota ready to load the “stores” for the school.

We got many thanks you’s, but the real thanks was for the thought and action taken by the CO. The RAAF hierarchy never knew, but I am sure they would have applauded such action. Words like “hero” were spoken, but we were not heroes; we just had a CO who thought he could help the less fortunate.

As coincidence would happen, still in Darwin and two days before we were due to return to Williamtown, we were both posted to new duties: the CO to a higher office; me to undergo instructor training at the RAAF’s Central Flying School at East Sale in Victoria.

Yet again I was called to the CO’s office for another confidential briefing.

Speed brakes out, and lollies for the kids.

“Before we leave tomorrow and as we won’t be back here again, you and I are going to do a beat up this afternoon of the Mission. We’ll do a flyby, slow as we can, as low as we dare and… wait for it… I have arranged for bags of lollies and chocolates to be loaded in the speed brake wells. When we are over the airfield we can select the speed brakes out… lollies for the kids; what do you think?”

It didn’t matter what I thought. I was all for it. I just hoped we didn’t hurt anyone… an unlikely event! Amazing stuff. Great fun and doing something that a fighter aircraft would not normally do and to bring joy to the nuns and children at the Mission.

The speed brake wells had already been loaded and the speed brakes were closed, however, the start sequence needed slight modification. After engine start, we would normally check the operation by cycling them out then in. This time there would be no checks. We didn’t want our earlier habits to cause an abort.

Lining up for takeoff, I thought of all the warlike sorties I had imagined and flown and smiled to myself as we rolled down the runway. The CO nodded; gear selected up; radio channel change to radar frequency and we were on our way.

At 1,000 feet with only 43 miles to Bathurst Island, we travelled at a sedate 180 kts. I thought: three miles a minute – a 14-minute trip as I moved into a loose attack formation and the CO lined up on the grass strip. I could see white-habited nuns and children over the strip waving as we approached. “Speed Brakes Go” came the radio call and I saw lollies fall from the CO’s aircraft. As we pulled up in a steep wingover and looking back at the airstrip, it was a wonderful sight to see… children and nuns on the airstrip retrieving lollies from the sky..

But there was a downside to the operation. No chocolates fell from either aircraft as they melted from the engine heat and streamed along the fuselage of our aircraft. No doubt a big cleaning job, but there were no complaints from our squadron colleagues.

Fighter aircraft don’t always have to be death-dealing machines – in the right hands they can bring joy and some happiness to those we can help.

Sister Francine and I corresponded for several years until I lost contact when she was transferred to another mission. Twenty-five years later as I walked to the airport terminal in Nauru, having flown an Air Nauru B-727 from Guam, a nun approached me.

She said, “There is someone over there who wants to meet you.”

It was her… Sister Francine!

The cellphone 27 approach into Helena

Friday Photo: above the clouds in Argentina
Scroll to top