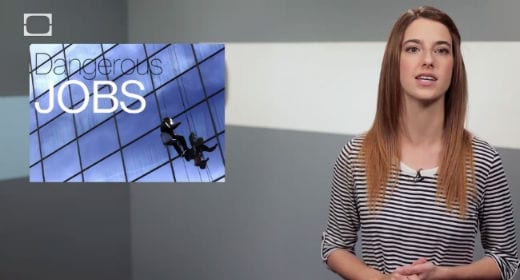 A common staple of Internet garbage has become those inane lists of 10 Best….10 Worst….10 Most. Cuss ‘em but you do look at them and recently I got a jolt when one I read said that “airline pilot” was the third most dangerous job in the country, with 50.6 fatalities per year for every 100,000 people involved.

The news media claims that airline pilot is one of the most dangerous jobs. Really?!

Of course, that is absurd. Our airline transportation system is the safest form of transportation that has ever existed, by far, and to suggest that the job of flying airliners is that dangerous makes no sense. Neither does the sensationalism that comes after a bad landing or a small panel falls off an airliner. But the media does love to trot out the talking heads and warn of disasters lurking just around the corner. Every slight airline incident seems to get the scrutiny of a major disaster. As they used to say, it sells papers – even if it is misleading.

What is most bothersome about that listing of “airline pilot” as the third most dangerous job is that it came from somewhere and I looked into the source and found out where that was. The general aviation accident record can be interpreted to show that there are 50.6 annual pilot fatalities for every 100,000 pilots. I am not saying that is an absolutely accurate interpretation, just that it is possible.

It’s a little sobering that our avocation can be that high on a list of dangerous things to do. Equally bothersome is the fact that the NTSB’s preliminary fatal accident rate in private flying showed a relatively significant spike in 2014, to 1.4 fatal accidents per 100,000 hours. That would be the worst record since 1996. Recently, in another post, I said that the accident rate had remained about the same for years. Now that has changed, and not for the better.

Talking heads were quick to point out that, given the relatively small nature of the activity, this jump in the fatal accident rate could be an aberration and that the rate will settle back to the “no change” range of the past couple of decades. That is something to hope for but not to anticipate. And is no change in what has been a bad accident rate for years a good thing?

The airlines have been able to parlay advances in technology and training to their near-perfect safety record. We have available every bit (and possibly more) in the way of high-tech stuff and yet the safety record doesn’t improve and has now apparently gotten worse. There is no question that something is badly out of place. Our tech improvements have been around for long enough to have started making a difference but things seem to be going the wrong way.

You know what comes next: Unless the pilot is improved, no amount of high-tech stuff will ever have a beneficial effect on the safety record. Large sums have been spent by entities like the AOPA Air Safety Foundation (now Institute) and over the years millions of words (some mine) have been printed in aviation journals trying to promote flying safety but it has all apparently been to no avail. The money has been wasted and the words have fallen on deaf ears. The record has actually gotten worse.

If the safety effort has not worked and all the new equipment has not helped, what might be done next? Certainly to say that a worse safety record in one year doesn’t really mean anything is not productive.

Something that makes the next step hard to determine is the fact that the nature of the pilot population has apparently changed. Thirty years ago reader surveys at FLYING showed that the most popular subjects were safety, flying technique and weather. Today I note in our AIR FACTS numbers that these subjects are not the key things that they once were.

Almost 40 years ago I wrote a book on this subject. Flying Safely sold about 35,000 copies in its original and revised versions. A few years ago I wrote another book on safety, The Next Hour. The total sales of that one were tiny by comparison. The interest just seems not to be there now.

Is that autopilot a good thing for safety or a bad thing?

I have also seen an increase in the number of pilots who question why we even talk about safety. They don’t want to hear about it and don’t want the spouse to find out that private flying is not safer than driving or riding the airlines. It is a real challenge to find a solution to a problem that the participants won’t acknowledge.

That sure doesn’t mean we should quit trying.

I asked one CFI, with experience in a wide range of airplanes, why he thought the record might be worsening. He said he expected this to happen it because pilots have become more interested in high-tech and less interested in flying. He thinks pilots fly around with their heads down, mesmerized by screens, and not really interested in what is going on with the airplane which is still there and has to be flown. Certainly we see people spending an inordinate amount of time staring at and thumbing smart phones everywhere else. Why expect it to be any different in airplanes?

I agree that the interests of new pilots, and born-again older pilots, have changed. Years ago I could write an article about crosswind landings and pilots would lap it up. Now I can do a post on crosswind landings and a relative few people will look at it. If you want to draw a crowd, write about iPads in the cockpit.

I guess the inescapable conclusion is that today’s pilot does not think flying is inherently risky so he is just not willing to put a lot of time into thinking about that. What danger does lurk can be managed on the screen. What is going on makes me wonder if today’s pilot really wants to be what we historically thought of as a pilot. If the abiding interest in aviation and the camaraderie that existed among the faithful is gone, what else can be found to build on?

This is where the desire to attract new people and ensure some sort of future for private aviation and the desire to try to make it less risky collide head-on.

It is my opinion that while attracting new people is of primary importance, this will become ever-more difficult if the accident rate worsens. Trying to sell something that is increasingly risky to people who are increasingly risk-averse is more than a challenge.

I have been around for a long time, working this subject for most of that long time. I’d be the first to say that my two-bits worth might not have the value of a quarter but here it is anyway: I think we need to be up front and vocal about the fact that flying as it is being done today is probably more dangerous than most like to admit. That would cause some to turn away from the activity but we might be doing them a favor. Flying is totally unforgiving of carelessness or inattention. Any pilot who doesn’t recognize this and acknowledge the potential hazards is likely to account for one more uptick in that unfortunate accident rate.

The other thing that has to be acknowledged and talked about is the fact that the high-tech is great, but having it does not automatically equate to safer flying.

For example, it truly bothers me to see angle of attack instrumentation presented as some new device that will save your butt. It is old and like other devices it gives information about something that can be easily managed without the device. I hasten to add that the importance of angle of attack management is not stressed nearly enough in training and testing. You can’t buy safety, you have to learn it. It has to become a state of mind.

It has always been true that the people who don’t need it are the ones who seek out useful safety information. The ones who badly need the information don’t want it and have always been difficult if not impossible to reach. The latter used to be the macho hairy-chested guy wearing a leisure suit and gold chain, with an attractive lady on his arm. Maybe he is now the technerd flying along poking his devices while totally oblivious to the fact that he is pilot in command of a real airplane that is governed by the laws of aerodynamics, not software.

I guess this leaves safety-minded folks two choices: Either combine real flying with high-tech and connect with the new breed of pilot, or, watch the accident rate gravitate to new highs.

Gear down… or is it?
Scroll to top