Blog - Latest News
You are here: Home1 / Article Archive2 / I was there3 / Good old boys and helicopters

Back in the early 70s, I was running a flight school at Opa-Locka Airport (that translates to high ground and sweet grass) in south Florida. Flying a stable of “C one fifties and one seven twos” every day, especially the same one, does get a bit tiresome. Help was a phone call away: I received a call from a good friend who was the chief pilot of a helicopter company out of North Perry Airport, just a few miles north of Opa-Locka.

He was assigned to take one the company’s Bell Jet Rangers (BH-206) to north Georgia for a movie shoot. He needed a co-pilot and help in navigating the 500 miles to a small town in Rabun County Georgia. The destination was a motel at a specific location next to a vacant lot. As the departure was several days away, I said I could go and cleared my student schedule for the trip.

Today a flight of 500 miles is not a problem, even as low as we were planning to go, having an iPad on my kneeboard with detailed information, synthetic vision, and traffic. All this provided from space to an instrument that would get lost in an average flight bag was only known in the areas of science fiction at the time. 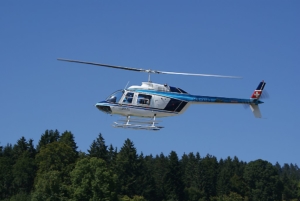 In the 70s, airspace was made up of Airport Traffic Areas, and General Controlled Airspace. Prohibited areas were over the White House and wherever the president was or might be. Navigation was going to be part IFR—I Follow Roads—with a hint of dead reckoning and a dash of pilotage thrown in for good measure. The VOR systems was the main source of navigation in the US at that time. Nice, but the helicopter was not equipped with one, nor ADF—only a single NAV/COM. A compass was the only navigation instrument. Well, that and three sectional charts: Miami, Jacksonville, and Atlanta.

Radar vectors and flight following? Sorry, no transponder. Plus, we would be flying less than 1000 feet AGL most of the time, sometimes much less than that. As you may remember, this was referred to as “map in the lap navigation.” We carried two (empty) 10 gallon gas cans to fill up at our last fuel stop if jet fuel was not available in our planned operational area.

Departure was just as the sun was coming up. At 1500 feet “IFR” and following the Florida Turnpike until that became boring, we vectored over the east coast of Florida and enjoyed flying offshore at below 500 feet. Moving at 140 kts low level in a helicopter is a rush. After having much too much fun, we climbed back to 800 feet and rejoined the Turnpike moving north. An hour and a half later we were looking for a small airport that reportedly carried jet fuel.

As we landed at an uncontrolled field, I dismounted and trotted to over to the fuel pumps. I queried the attendant on where he would like us to set down so as not to cause any problems with our rotor wash. His only reply upon looking at the helicopter still turning was to point to the ramp not far from the fuel pumps. I gestured to my friend, who picked up and placed the skids just where he had indicated. He was not happy with us and said so. We shut down and toped off the tanks and filled the two gas cans then made them secure in the back with the seat belts.

Surprisingly even with the Vietnam war still raging, the sight of a helicopter arriving at a small airport was still a rarity in most areas—unlike today. During this time a small crowd had begun to gather. We would find out later why all the curiosity. Our departure was an event for some reason and perhaps a good time to be on our way. Cruising at 800 feet, landmarks became fewer and further between as we went north. Still in our “IFR” mode, we crossed Interstate 10, a major landmark for us. Later we watched heavy air traffic overhead, showing that we were northeast of Atlanta. So far so good; now came the hard part.

Northeast Georgia is beautiful country, a vast forest dotted with small farms and country roads. I noticed several small columns of smoke scattered across the landscape, presumably from farmhouse chimneys. Truly this was God’s country, and several of John Denver songs came to mind, but trying to locate the landing zone was proving difficult. Our LZ was a motel, with a pool, on a county road on a crossroad with a vacant lot on the east side of it. Go stick that in your GPS.

We were moving very slowly, just above transitional lift, considering if our current selection was the best of many that had met almost all the requirements. As we circled the intersection and were contemplating going for fuel and then returning, a man came out of and stood in the vacant lot with his arms raised over his head indicating to land there. As we did, a small crowd and a traffic jam was in the progress of forming.

We were introduced to a local man who was hired to “guard” the helicopter during the night. As he helped us refuel from the gas cans we had with us and secure the helicopter, a pickup truck pulled into the vacant lot. A gentleman hopped out and strode up. I noticed he had several shotguns located on a rack just behind the seat, normal in this part of the country. As I recall, it did make my friend nervous. 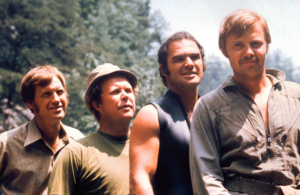 “Hi y’all, what are you old boys doing here?” he inquired. We explained that we were here to do some aerial shots for the movie company that was filming in the area. The movie was based on the book Deliverance. The gentleman was very pleased to hear that, as he knew that Burt Reynolds was in the movie (of course he was fan).

“Well so you not government revenuers [translation: revenuers are law enforcement officers tasked with finding and arresting persons who illegally produce whiskey, aka moonshine] so you’re good boys.” He seemed pleased at us being there. He smiled and slapped me on the shoulder. “I’ll let everyone know you just good old boys, you’re OK.”

As he left, my friend looked at me and asked just what that was all about. Before I could answer, the gentleman who was hired to watch the helicopter said, “we have had a lot of nosy revenuers flying around looking for stills some people have on their farms. The folks hereabouts do not take kindly to the government sticking their nose into their business.”

“Oh?” my friend responded, “What did they do about it?”

“Well, they have been known to shoot at helicopters to discourage them from doing so,” he informed us.

That took a second to sink in. Oh yes, the small columns of smoke we had seen when coming in, along with the crowds that gathered when we refueled. I thought that smoke would be a good indicator of suspect activity. Although both of us had spent some time in Nam, where one expects to have unfriendly people shooting at you with one thing or another, we had not considered that we might receive ground fire in northern Georgia.

The following morning was taken up by installing the Taylor Mount for the motion picture camera and literally tying the camera operator to the helicopter’s so his legs could dangle out the door. Several people were also in the back who would be pointing out what to shoot.

It was a good day’s flying, and the film crew seamed pleased with the coverage they had. We had passed over numerous small farms both transiting the area and slowly, sometimes at a hover to get a better look at things. Most of the residents of the farms and persons on the ground appeared to wave at us and smile. I imagine our heavily armed friend in the pickup truck did let everyone know we were “good old boys” and not revenuers.

We packed up and headed back that evening, cruising at 5500 feet this time. With the sun setting, we decided that might be a more prudent altitude for a night flight and safer in case someone did not get the word on just who theses good old boys were.

Are “impossible turns” worth all the attention?