Blog - Latest News
You are here: Home1 / Article Archive2 / Technique3 / Are “impossible turns” worth all the attention?

A major purpose of gathering accident statistics is to assess where safety resources should be allocated. In other words, are pilots being trained on the right things? Are safety messages targeting the right things? Are researchers’ efforts addressing problems with the most likely payback? And, as the title states, are “impossible turns” worth the effort that is being expended upon their study? 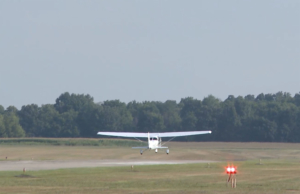 Many takeoff accidents can be categorized as “failure to achieve sustained flight.”

The data set for this study was all NTSB accidents in 2018 involving single engine, fixed wing, piston airplanes, Part 91 operations, excluding IMC, student pilots, instruction, seaplanes, cruise conditions, landings, and night. The exclusions were done with an arduous, iterative, and painful combination of database search specification, keyword exclusions, and manual sorting. For example, “float” was used to eliminate float plane events till it was discovered that this keyword also excluded power losses due to carburetor floats. There were other gotchas, equally obscure. 1,078 events were found with the SQL search, trimmed to 137 with manual exclusions.

Although the analysis undoubtedly contains subjective errors, sorting errors, and poor data quality factors, it is not believed that any of those errors affect the conclusions. Remember that the purpose of this study was not to generate perfect statistics. The purpose of this study was to address the specific question in the title, so, for once, close enough was good enough.

As was expected, conventional taxonomies did not adequately describe the phenomena encountered in the data. Go Around events and Takeoff events shared some of the same taxonomy.

The NTSB reports had a marvelous term, “Abnormal Ground Contact,” used in the context of landings. That term was not relevant in this study, however, because the Go Around statistics did not consider the cause of the Go Around.

10 Go Around, No Touchdown

These were all Failure To Achieve Sustained Flight except for one Forced Landing. There were no fatalities, and only one Serious injury. There were undoubtedly many go arounds that were not accident events and hence, not reported.

34 Go Around With Touchdown

Almost all of these were Failure To Achieve Sustained Flight, with no fatalities and only two serious injury accidents. There was one Forced Landing and two cases where the damaged airplane completed the go around and flew to a landing.

Again, only one Forced Landing and the rest were Failure To Achieve Sustained Flight. There were no injuries.

These statistics are not necessarily precise but are representative of overall injury statistics, with the number of events in all of the events downloaded (including cruise and landings) in the center column, and the number of takeoff / go around events in the right column. 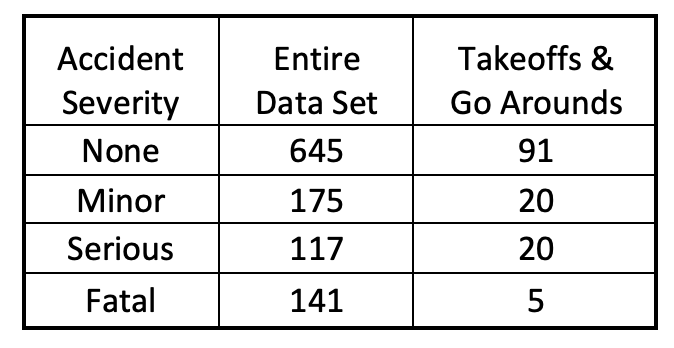 The rates of accident severity are comparable between TO/GA and all accidents, except for fatalities, which shows an obvious difference.

This limited data set and this admittedly less than robust analysis indicate that pilots are likely handling the “impossible turn” scenario properly, more often than not.

Similarly, the takeoff and go around accidents appear to generate only a very small proportion of fatal accidents.

A surprise in the narratives is the number of events in which the pilot flew down the runway with the stall horn blaring before the accident. The unanticipated conclusion is that pilot training should include flight near the stall and possibly full stalls before a pilot encounters a situation which could result in Failure To Achieve Sustained Flight.