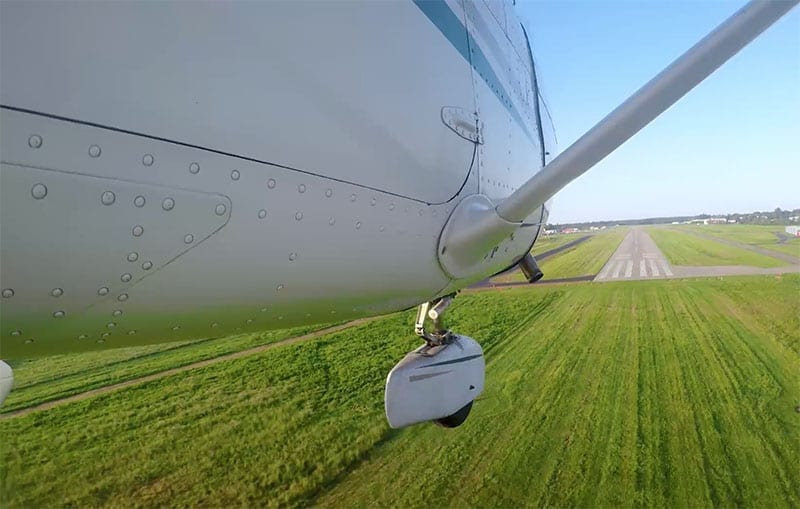 Pilots love a good debate, and some topics seem to come in and out of fashion like bell bottoms. Right now the wars over lean of peak and angle of attack indicators have cooled (thankfully), but the war over “the impossible turn” seems to be heating up. In the last few months I’ve seen multiple articles, videos, and forum threads on the subject. It’s fun to debate, but what problem are we trying to solve here?

As my 8th grade English teacher always said, we first have to define our terms, and there we find the start of trouble. The impossible turn is actually quite a vague phrase. It generally refers to a low altitude, 180-degree turn back to the departure airport after experiencing an engine failure on takeoff. The classic scenario involves a sudden power loss below 1000 ft. AGL, where the pilot feels an overwhelming urge to crank and bank their way back to the safety of a runway. There’s not much margin for error, especially at low altitude, and if it’s not done properly the result can be fatal.

I appreciate the desire to make an impression, and that’s clearly what safety advocates are trying to do with their catchy phrase—if the engine quits on takeoff, resist the urge to turn. It’s impossible. There might be a perfectly good field right in front of the airplane, and landing there is easier and safer than trying to get back to the airport.

But while this may be good advice for a new pilot, very few things in aviation are quite so black and white. Such binary language may discourage a pilot from ever trying a turnback, which is flat out wrong. Sometimes, returning to the airport is the safest option and if you’ve never practiced it or thought about it there’s no way you’ll pull it off successfully.

Taking off from Midway doesn’t leave you many good options?

Think about some urban airports that are surrounded on all sides by housing or offices. Chicago’s Midway Airport, Atlanta’s Peachtree-DeKalb Airport, and Dallas’s Addison Airport all come to mind. On takeoff from one of these airports, an engine failure a mile off the end of the runway leaves you with no good options. Should you automatically exclude the large airport area with four runways and instead try to shoehorn the airplane into a residential neighborhood? That hardly seems safer.

I believe pilots make the impossible turn successfully every year, but you rarely hear about them because good news rarely makes the headlines. Here’s just one example of a turnback in a single engine piston airplane that worked out quite well. It was done at low altitude, and we can all second guess the decision, but it’s clear that the turnback was successful. The pilot walked away.

Glider pilots practice this maneuver all the time, simulating a rope break on departure. When I earned my glider rating about 15 years ago, I remember being shocked at how low we could make a safe return to the airport in such a situation. In many scenarios, the first step was to turn left, count a few seconds, then turn back around 270 degrees to the right in order to line up on final. Those few seconds felt like an eternity, but with proper planning and technique, it worked out. Granted, gliders have highly efficient wings compared to a Cessna, but it’s clear that the impossible turn isn’t impossible at all. We simply have to know when it’s safe and when it’s not.

This brings up the critical question: how low is too low? The correct answer varies from airplane to airplane and even airport to airport (a large airport with multiple runways means a shorter turn is required to find pavement). About 1000 ft. AGL is a good starting point, but it could be as low as 600 ft. or as high as 2500 ft.

The only way to know for sure is to practice, but make sure to do it from a safe altitude and with an instructor onboard. This is no time for steep turns at 200 ft. AGL. Every year during recurrent training for the Pilatus PC-12 I fly, I practice turnbacks from a variety of altitudes and airplane configurations. I’ve done this both in a full motion simulator at Flight Safety and in the airplane with an experienced PC-12 instructor in the right seat, and I never fail to learn something new.

In the airplane, one option is to simulate a takeoff by flying down the runway at slow speed but from 1000-2000 ft. AGL. Climb out as you normally would, and at a predetermined altitude pull the power back. Make your turn and set a hard deck to create an airport in the sky—if you’re not “on the runway” by 1000 ft. AGL it’s time to abandon the maneuver and go around.

Over the years I’ve come away with some important lessons for this maneuver. First, and most importantly, the initial reaction should almost always be to push. If you’re climbing out at Vy, you will likely be at a high pitch angle and without much excess energy. The human instinct is to pull back, but doing so in this situation can quickly lead to a stall. I tell myself to push forward and reduce the angle of attack before doing anything else. At the very least, this buys time.

Next, it’s critical that you make the turn aggressively. That doesn’t mean dangerously—you’re low to the ground and at slow speed, so you want to be very careful of an accelerated stall—but if you only bank 10 degrees you’ll never make it back. In the Pilatus, at least a 30-degree bank seems to be about right, but that feels like a lot when you’re low to the ground. Don’t let the airplane overbank and don’t pull back to tighten the turn.

Finally, wind matters. This is obvious from a physics standpoint, but it’s often overlooked in the real world. Taking off in calm winds might mean your turnback leaves you far away from the runway, while a 20-knot headwind can leave you right on top of the airport when you roll back out. In some practice scenarios with strong headwinds on takeoff, the biggest issue is getting stopped on the runway after turning back. The headwind keeps you close to the airport as you climb, but then pushes you when you descend. To avoid running off the far end of the runway, full flaps and even a slip may be required. Solving this problem simply takes practice.

Can you make it back?

There’s no doubt that this is a maximum performance maneuver, but then again a catastrophic engine failure is an emergency situation that demands decisive action. With planning and practice, the impossible turn becomes just another tool in the bag, one that can be invaluable if used under the right circumstances. Many open-minded pilots now recognize this, from Captain Brian Schiff (who forcefully advocates for “the possible turn”) to the FAA (who updated their guidance in Advisory Circular 61-83).

The key is to have a plan that you brief before every takeoff (even if it’s just to yourself). You have to know what your options are and be spring-loaded to react properly, given the conditions. For me, this briefing always considers a few essential things:

This doesn’t have to take long, but a typical briefing for me might be, “We’ll be taking off on runway 21L and climbing out on runway heading; below 1500 feet MSL an engine failure means we’ll land straight ahead in that open field; above 1500 feet MSL we can make a right turn into the wind to land on runway 3L; VFR weather means we’ll do it visually.”

Also, don’t get locked into landing straight ahead or turning around. Sometimes there are other options that should be part of your takeoff briefing. For example, Cirrus pilots typically set a minimum altitude for deployment of the whole airplane parachute system (CAPS). In many cases this is a better idea than either a turnback or a forced landing on a road or parking lot. The point is, you should use all the tools at your disposal to give yourself options, but make sure you think about those options from the calm of the taxiway and not at 800 feet with a quiet engine.

Impossible turn? Hardly. Calling it the possible turn is more accurate, but I prefer “the unforgiving turn.” Like an ILS to minimums, it can be done safely with planning, practice, and discipline.

Go or No Go: smoky San Carlos
Scroll to top