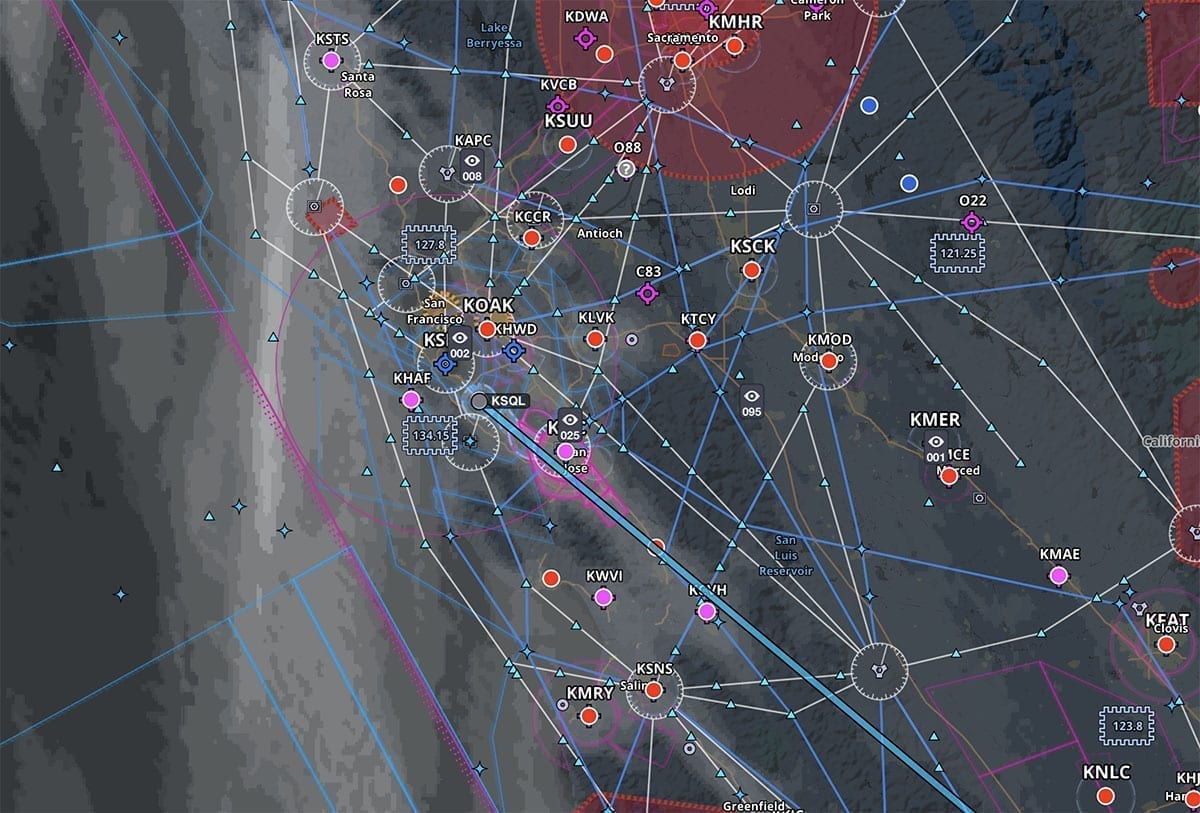 The overall weather for your flight today from Scottsdale, Arizona (SDL), to San Carlos, California (SQL), looks excellent—no fronts, no storms, no ice, hardly any clouds—with one exception. Huge wildfires have covered much of Northern California with smoke. That means widespread IFR conditions near your destination. Can you make the trip?

The flight should take about 3:30 in your Cirrus SR22, given the less-than-direct route and 12,000 ft. cruising altitude that are required for avoiding terrain. That’s a long trip in this airplane, but certainly within its capabilities; you should arrive in the Bay Area with about 20 gallons of fuel remaining, which is more than your one hour personal minimum. However, the need to fly to an alternate might cut into that reserve. You’re instrument rated and current.

Departure time is planned for 9:00am PDT (1600Z). Read the weather briefing below and then add a comment sharing your decision.

Your trip today will take you north out of the Phoenix area, then west towards Bakersfield, before turning northwest towards the San Francisco area.

The surface analysis shows hardly anything to worry about, with no organized weather system throughout the Southwest.

The prog chart shows more of the same, with generally fair weather continuing throughout the day and into tomorrow.

There’s nothing to look at on the radar today, but the satellite image shows the smoke covering much of California. It’s clearly not vertically developed, but it is all over the coast.

The Graphical AIRMET shows what you would expect—good weather except for restricted visibilities. The unusual FU stands for smoke.

These weather conditions are where the Graphical Forecast for Aviation (GFA) can add some detail. First, the surface forecast, which shows widespread low visibility near your destination.

Then there’s the cloud forecast, valid for about an hour and a half before your arrival. It shows clear skies except along the coast, where tops are low and ceilings are forecast to be around 1000 ft.

Here’s where the rubber meets the road. Will conditions allow you to make a safe approach and landing at San Carlos? First the good news: your departure airport is reporting excellent conditions and it’s forecast to stay that way.

En route, the weather is good VFR until you get north of Los Angeles. At your destination, conditions are definitely IFR—in fact, they are below approach minimums right now (which are 900 and 1 1/4 for the RNAV (GPS) Z to runway 30). The nearest TAF (for SFO) suggests things will get better as the day goes on.

Given the current weather at SQL, the TAF at SFO, and common sense, you need an IFR alternate today. Unfortunately, there aren’t many good options. Smoke has brought ceilings and visibility down all over California. Here are three nearby international airports, all reporting conditions that are above approach minimums, but not by much.

The story is the same almost everywhere within 100 miles. In fact, Bakersfield is the nearest airport with truly VFR weather right now (clear skies and 3 miles visibility with haze), but that’s 200 miles away.

A few PIREPs offer the last details. As expected, tops are very low but so are ceilings.

For a fairly benign weather day, there’s actually a lot going on here. First things first: if the TAF holds, you can fly to your destination and land safely. Easy. Legally, you need an alternate and while none of the airports around San Carlos qualify right now based on the METARs, they do based on the TAFs. In fact, you could wait half an hour longer and eliminate the need for an alternate altogether. The only minor issue is that a Presidential TFR is going active early in the afternoon in Phoenix, so you’d definitely like to be airborne in the next two hours or so.

The legwork for a “legal” IFR alternate is beside the point, really. When you arrive at SQL, you’ll have enough fuel to shoot the approach, miss, and divert to a nearby airport (there are plenty around with precision approaches, including SFO, OAK, SJC). Given all that, you’ll still have the FAA-mandated 45 minutes of fuel on board, so you’re legal. But you won’t have much more fuel than that, so if conditions happen to go down, you have few good options and no solid VFR weather within range. And then of course there’s the hassle factor—San Carlos is much more convenient for your ultimate destination than the big airports at San Jose or San Francisco, not to mention the higher costs.

Is it a go or a no-go? Add your comment below.

Stop calling it the impossible turn

A less-than-graceful arrival
Scroll to top