Blog - Latest News
You are here: Home1 / Article Archive2 / I was there3 / Passing the torch from father to son

In 1971, my dad earned his private pilot license and joined the AOPA. A few years later, he earned his instrument, multi-engine, and commercial ratings. As a young child, I often flew in the right seat in N9178J, his 1966 Piper Cherokee (180 hp) and I caught the flying bug early in life. 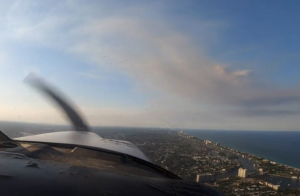 A flight together in a small airplane is one of the best ways for fathers and sons to connect.

Living on Martha’s Vineyard, having an airplane was one way to overcome the isolation of life on an island, and we flew on all sorts of adventures around New England. Whether it was a quick hop across Nantucket Sound to Hyannis so that he could run me through the drive-through at McDonald’s, flying the film for Jaws to Boston so that it could be sent to California, trips to Mystic Seaport, or just going to pick up family and friends, I knew very quickly that I wanted to be a pilot. Unbeknownst to me at the time, that dream would be put on hold for a few decades.

In 1980, my dad moved away from the island. As a result of the move, dad sold 9178J, and he last flew with my brother and me in a rented Warrior in 1984. After that, my dad never took to the skies again as a pilot.

As I got older, built my career, and started my own family, Microsoft Flight Simulator became a way for me to stay connected with aviation. I lost entire weekends making simulated flights all around the country!

Fast forward to 2021, and as my dad was getting ready to head north for the summer, he presented me with my 50th birthday gift. It was a gift certificate for a discovery flight and my first three hours of flight training at American Flyers in Pompano. Almost 50 years to the day that he received his AOPA 50-year membership pin, I would start flight training!

I completed training, passed my check ride, and earned my private pilot’s certificate in December of 2021. After a few months of renting and flirting with the purchase of an airplane, I was finally accepted into a local flying club. Dad and I made several local flights and short cross-country flights together over the winter and in May of 2022, we made one last flight together before he headed north for the summer.

On a Wednesday, we headed to Pompano Airpark after work, where I had reserved one of the club’s Piper Archers for the evening. We were going to fly over to Naples and then fly home as the sun set behind us. Prior to departure, I called Leidos for a weather briefing and it looked like we would enjoy clear skies the entire night. We taxied, completed our run-up, and took off on runway 10, making a left downwind departure.

The flight west over the Everglades was smooth, until we were about 30 miles from Naples. Two small storm cells had popped up, forcing us to descend to 3000 feet to maintain VFR. By tracking just north of I-75, we would thread the needle between them and emerge into some gorgeous weather.

Approaching Naples, we were expecting to land on runway 23, and the controller instructed us to make a left base entry to follow a Hawker that was on final. The winds were a little stronger than expected and we were facing about an 8-10 knot crosswind from the right, making me a little apprehensive, even though I had trained and flown in stronger crosswinds before.

The first approach was horrible. As we began to round out and flare, I failed to keep enough right aileron in and we drifted well left of centerline, requiring a go-around. The next approach was better and after a smooth crosswind landing, I decided to top off with fuel at Naples Aviation. Looking at the weather on my iPad, I was concerned that we might have to deviate south of the two storms, and I did not want fuel to be an issue. 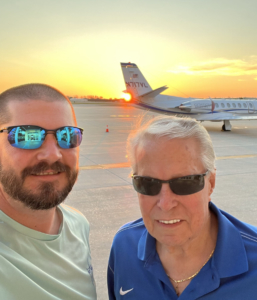 The fuel stop gave us a chance to stretch our legs in the air conditioning, have a quick beverage, and hang with the jet set for a bit. It also allowed the storms to move north, so that they would not impact our return. At about 8:15 pm, we settled our bill with the very friendly staff member at the desk and walked back out to the airplane. The bright orange glow of a gulf-coast sunset lit up the sky to our west and I knew it was going to be a spectacular fight home.

We took off on runway 23, right into the face of one of the prettiest sunsets I have ever seen. As we made our left crosswind turn, the city lights below us were sparkling in the distance, as the remaining daylight faded away. Turning to the east, the storms had moved well north, and we could see the distant flash of lightning illuminating the darkening sky.

Leaving Naples behind us, we flew over the dark expanse of the Everglades, with just a thin sliver of light, I-75, below us. As we reached the halfway point, right before switching over from Fort Myers to Miami Approach, the radio chatter had slowed down and for a moment, time just seemed to stand still. It was like it was just the two of us, the airplane, and nothing else. I had flashbacks to all those flights we had made when I was younger. I glanced over at Dad and the look of pure enjoyment on his face told me he felt the same thing I did. Without a word, we both knew that the torch had just been passed from one pilot to another.

The quiet would fade away as we flew over western Broward County, in busier airspace, approaching Pompano with the city lights of West Broward shining below us. We followed the Sawgrass Expressway eastbound, crossed the landfill, and began our descent after lining up on the extended centerline for runway 15. I greased the landing and we let it roll out to the end of the runway so that we could taxi right onto our ramp.

With near perfect weather, a breathtaking Gulf Coast sunset, and a spectacular nighttime approach and landing, we could not have had a more perfect night. We will have other flights together, but this one, symbolizing the passing of the torch between us, is one flight I will never forget. Casey Ahlbum
Casey caught the aviation bug at a young age, flying all around New England with his dad in a 1966 Piper Cherokee. Adult life got in the way for a few decades as he built his corporate career and raised a family. In 2021, at the age of 50, he finally achieved his dream of becoming a pilot. Flying out of Pompano Beach, Florida, he serves on the board of his local flying club while spending as much time as possible flying around Florida with friends and family. He is currently pursuing his instrument rating and wants to eventually become a CFI so that he can help train the next generation of aviators.