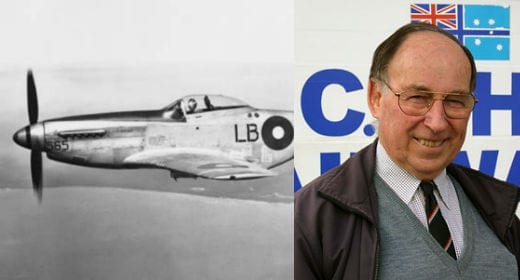 It would be difficult to describe an aviation career more colorful and varied than that of Captain John Laming. From throwing newspapers out of DC-3s on a “paper route” to a distinguished career in the Royal Australian Air Force (RAAF) flying the Mustang, Vampire and Lincoln, he’s lived through some memorable flights. After 18 years in the RAAF, he worked in Melbourne as an Airways Surveyor, and later flew DC-3s and F.27s performing airways calibration duties. In 1976, Captain Laming was hired by Air Nauru, flying F.28s and later 737-200s on routes throughout the South Pacific. After retiring, he returned to Australia where he kept flying as a flight instructor and charter pilot.

1. You were an eyewitness as a young boy to the Battle of Britain. What are some of your vivid memories from that time?

During the Battle of Britain in the English summer of 1940, the German Luftwaffe came very close to overwhelming the British Royal Air Force by sheer weight of numbers. German forces waited on the coast of France until air supremacy was certain, when England would have been invaded and lost to Nazi Germany. The population of England were not told how bad things really were and the propaganda on the British radio stations and in the newspapers was aimed at convincing the population that the RAF were winning the air battles. This was to keep up the British morale. Listening to the radio every day convinced the British population that all was well and that the RAF pilots were almost invincible. In fact, the losses on both sides of aircraft and pilots were roughly equal. But the Germans had many more aircraft than the RAF.

I have many memories of those days but one particular event has remained in my mind right up to the present day. I was eight years old and living with old relatives in the English County of Kent over which air battles were constant. The air-raid siren had sounded and the sound of machine gun fire came from overhead. It was then I saw two low flying aircraft flying in my direction. The front aircraft was a German fighter called a Messerschmitt Me109. Close behind by 100 yards was an RAF Spitfire who was firing directly into the Me 109. The German fighter was on fire and it was obvious the pilot was probably dead as the aircraft was gliding in a gentle descent and making no attempt to evade the Spitfire, which fired at will. Within seconds both aircraft disappeared from my view behind buildings but not before I saw the Royal Air Force markings on the Spitfire and the big black swastika on the tail of the unfortunate enemy aircraft. In fact the German crashed in flames shortly after I lost sight of it.

As an impressionable eight year old boy, the sight of the poor Messerschmitt being shot down by an RAF Spitfire proved to my mind that RAF pilots were indeed our saviours and invincible just like the propaganda said.

John Laming has a long career in military, airline and instructional flying.

2. What was the most interesting/challenging part of flying to remote Pacific islands?

It was the best geography lesson I could have ever had. There were nations/places of which I had never heard of: Niue…Autitaki…Tarawa…Palau…Wallis island…Truk…Kosrae… and the difference between Tonga and Rarotonga. Also the challenge of operating into short coral and gravel runways most with no reliable navigation aids. And the forever spawning typhoons always present as we flew south to north and vice versa across the equator in the perpetual summer of each hemisphere.

In those days there were no real security problems and it was normal for the captain to take a stroll down the length of the cabin to talk personally to the passengers. Due to the remoteness of each airport often there were very few passengers. Among them would be American war veterans re-visiting old battle grounds or adventurers keen on exploring the islands. Our maps sometimes indicated an island last seen 200 years ago and now vanished. I would ask the passengers to let us know if they spotted anything that looked like a mysterious atoll. They loved the mystery.

They can simulate many abnormal and emergency events that cannot be safely done in an aircraft. But they can also become a “horror box” in the hands of an egomaniac instructor check pilot, where careers can be destroyed and/or an individual’s confidence be threatened. Experience and extensive research has shown that pilots of jet transports where full automation is mandated by the airline, basic pure flying skills are gradually lost over time. Despite this, far too much of simulator training still accents the use of the automatic pilot with very little time programmed for pilots to practice hand flying skills. Lip service only is paid by airline managements and regulators to the need to keep up manual flying skills and this is seen in the increased number of major accidents where poor flying ability was the primary cause of the accident. In my experience there are no areas where simulators are not useful and yet many companies still keep simulator training to the absolute minimum to meet regulatory requirements.

4. You have one flight left. What are you flying and where to?

I would love to return to Hong Kong Kai Tak airport flying a Boeing 737-200 by hand on the old IGS “Chequer Board” approach.  There would be a healthy crosswind and some low cloud to make it challenging.  In the old days it always gave me a great sense of satisfaction to pin those ILS needles and see the chequer board sign loom out of the mist.

5. What’s one safety habit that general aviation pilots could learn from the airlines?

Pre-flight planning is a must – plan even the shortest flight. Always have a “bolt hole” somewhere to go when the “what if” happens.  Many don’t bother to check NOTAMs or weather.

6. What’s different about flying in Australia vs. the US?

Better weather in Australia than anywhere in the USA. We have nothing like the full spectrum of severe weather that USA has. Low traffic density: our population is 22 million; USA over 316 million. Yet Australia is the same geographic size of USA but with little development in our centre compared to USA. Vast distances of nothing.

7. What is your proudest moment as a pilot?

First solo at age 18 in a De Havilland DH 82 Tiger Moth bi-plane. Second proudest:  first flight in a Mustang in the Royal Australian Air Force with only 220 hours in my logbook.

8. What advice would you give an aspiring airline pilot?

Try to have a second trade or professional qualification up your sleeve because past experience has shown airline companies can go under sooner or later. Regardless of what you read in the media of an impending pilot shortage, there is usually an oversupply of pilots in general. For that reason, aim to get a job with a well-regarded legacy carrier rather than a low cost carrier. Legacy carriers generally offer greater long term employment security and an assured promotion path.

The colorful stamps of Kiribati are famous.

9. Listening to hangar stories from older pilots, flying often sounds like it was more fun. Has all the emphasis on safety taken some of the sheer fun out of flying?

Definitely. Strict adherence to often quite unnecessary and superfluous SOP where such things as hand flying practice is frowned upon and turning off the flight director is a sin. We used to invite people, especially children, to the flight deck. These days the ogre of the regulator is forever present and the CVR becomes Big Brother in some airlines.

10. Is there any airplane you wish you had had an opportunity to fly? What is it?

Having flown a Mustang and a Hawker Sea Fury, I would love to have got my hands on a Spitfire.

11. If we came to visit you and requested the perfect South Seas/Australia flight, where would we go, in what airplane, and what would we see?

You would fly from Australia eastbound over the South Pacific Ocean to the Cook Islands. Depending on where you leave the east coast of Australia, New Zealand will be on your right hand wing tip 1000 miles over the horizon. Rarotonga is the main island of the Cook Islands where every night the islanders will show you real grass skirt dancing that sets your feet tapping and hips swaying and people are so friendly. English here is the normal language.

After a few days relaxing at Rarotonga then it is up the island chain from Western Samoa northwest to Tarawa in the Kiribati islands. Before independence they were known as the Gilbert and Ellice Islands after their discovery by these two British explorers. The postage stamps of these places are still evocative and beautiful.

Leaving Rarotonga you will pass over the atolls of Savii, Nukulaelae, Funfuti (where American B-25 Mitchells and Flying Fortresses were once based), Vaitapu, Nanumea and Nonouti until the beautiful Tarawa Lagoon appears on the horizon. The sheer remoteness of these islands and atolls is enthralling and to see islands where American forces fought in WWII makes you relive the history books. For comfort and timely arrival use a jet airliner. To land at some out-of-the way atolls and stay with the locals you need a reliable light twin with good weather radar!

Laming has contributed numerous fascinating articles to Air Facts. You can read them all at this page.

From Africa to America in a DC-3
9 replies