Blog - Latest News
You are here: Home1 / Article Archive2 / I was there3 / The day I learned I’d never be a fighter pilot 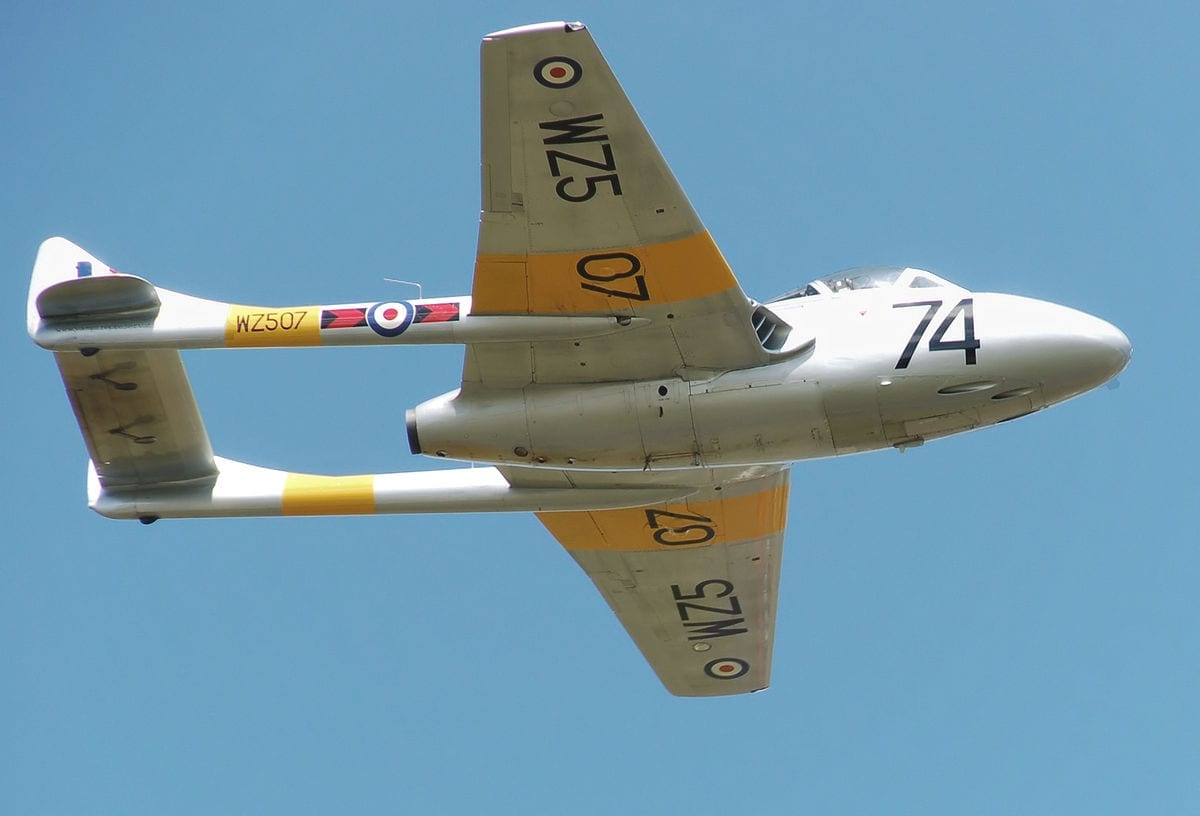 AS FIGHTER PILOT. NOT REQUIRED STANDARD.

Sixty four years after that assessment was penned into my pilot’s log book by the CFI of No. 2 Operational Training Unit at RAAF Base Williamtown, I still have a twinge of shame and regret.

In 1952, the Korean War was hotting up and the RAAF had a fighter squadron of Meteor twin-engine fighter-bombers already based in Korea. The RAAF increased its pilot recruiting and, after graduation, with brand new wings on my chest, I was posted to Williamtown to undergo a fighter course on Mustangs and Vampires. We did 50 hours on Mustangs learning dog-fighting, rocketry, dive-bombing and air-to-ground gunnery. After that, it was on to the single engine single-pilot, British-designed Vampire twin-boom fighter jet where again we covered high altitude flying, dive bombing and air-to-air tactics using camera guns.

With only one seat, dual flights in the Vampire were impossible.

There was no dual instruction as the Mustang and Vampire were single-seaters. Our fighter combat instructors flew in formation with us, and we learned the art of being fighter pilots from them. They had all returned from a tour of 100 missions in Korea and were well qualified to pass their experiences on to us. The Vampires we flew did not have ejection seats and it was accepted that bailing out at high speed should something go wrong was impossible.

Part of the Vampire course included air-to-air cine-camera gunnery where one Vampire would act as the target while another Vampire would practice gunnery attacks from various angles, all of which were recorded by camera (actuated by the gun-firing button). We were briefed to break off each attack at 200 yards from the target. Most of these attacks were at 15,000 feet and 300 knots. The target aircraft was known as the “stooge.”

The pilot of the stooge was in contact with the attacker by radio and held level flight as the attack progressed. It could be quite unnerving as the stooge could not see the attacker coming in fast from behind until it flashed past under him then into a climbing turn for another go. Disturbed airflow from the attacker passing a few feet below the stooge often elicited a warning radio call from the stooge that he was too close for comfort.

After several dummy attacks, the roles would be reversed with the stooge becoming the attacker. The Vampire was essentially a short-range fighter with an endurance of just over one hour. Both aircraft would land after 45 minutes and the camera evidence was removed and assessed for “hits.” My camera gun results indicated I was firing from too far away and therefore inaccurate.

About that time, the first of the two-seater Vampire design arrived at Williamtown and the CFI decided it would be a good opportunity to give me a dual check to see if my cine-camera results could be improved. After all, the fighter course was almost completed. I had not flown a dual-seat Vampire before and the cockpit layout was quite different to the single-seat version. Nevertheless, time was short and my instructor and I squeezed into the cockpit of the dual Vampire and after airborne soon caught up with our stooge.

At 15,000 feet and 300 knots, I made the first pass and broke off the attack at the regulation 200 yards. My instructor seemed happy, but suggested I get closer before breaking away. He took over control and demonstrated his method of attack. I simply sat and observed his technique. To my surprise he bored into 50 yards behind the stooge before making a violent break below then up and over the stooge. It must have been mighty close because the stooge pilot complained he was nearly hit. I didn’t like what I saw and told my instructor his method of attack and close break was dangerous. The instructor was a young pilot just returned from Korea and full of enthusiasm. He made several more close attacks before roles were reversed and we became the stooge. I was thoroughly alarmed at his bravado attitude and told him so.

The following day, the Commanding Officer called me into his office and gently broke the news that I was not up to standard as a fighter pilot and that it was arranged I be posted to fly bombers. I tried to explain that my instructor had broken all the rules by his cowboy antics in the dual Vampire but it was too late. The CO took the word of the instructor which I suppose was understandable. My logbook was then endorsed as “As fighter pilot. Not required standard.” I was close to tears. Perhaps it was all for the best, though. My remaining course members went to Korea where soon after one was killed when his Meteor broke apart in mid-air and another was shot down and became a POW.

A few days later, as I was packing my bags and preparing to leave Williamtown, I was called upon to fly a Mustang in a Mustang squadron versus Vampire squadron exercise. Each squadron had 12 aircraft. One of the Mustang pilots had gone sick and someone realised I was still on the base and could be a replacement. I hurried to the briefing, gathering my parachute on the way. I was to be No. 4 in one of the Mustang formations, which meant I was a wingman in the battle soon to take place. Cine-camera guns were loaded and the two squadrons got airborne.

I was the first to spot the first flight of Vampires attacking from above and guessed that as a wingman I would be targeted. Normally whoever spots the attackers warns the squadron leader and calls for the squadron to break sharply into the attack to make a deflection shot hard to achieve. I had nothing to lose as I had already been scrubbed. I broke into the attacking Vampires but delayed my warning call until I was half-way around in a steep turn. Then I called “squadron break starboard.” To this day, I don’t know why I did that because several Mustangs were caught by the cine-camera guns of the Vampires and were shot down during the ensuing dogfight.

The melee didn’t last long due to the limited endurance of the Vampires. Everyone landed and attended the post-flight de-briefing by the Commanding Officer. The same CO who had written in my log book “As fighter pilot. Not required standard.” There were 24 pilots at that briefing; many were fighter combat instructors as well as members of my fighter course.

As the briefing progressed, I decided to sneak out as I wasn’t needed and in any case I felt a bit guilty about not giving an early warning for the squadron break. As was about to leave, the CO asked who was Red Four in the Mustang formation. That was my call-sign and I raised my hand. “That was excellent flying,” said the CO who led the Vampires. “You broke so fast we couldn’t get a bead on you – well done, lad.”

I thanked him and wondered if he realised I was also the pilot who he had scrubbed a few days earlier for not being the required standard for a fighter pilot.

The next day I caught the train to Townsville in North Queensland, the home base of No. 10 Squadron, equipped with Lincoln four-engine heavy bombers. Also on the base was a Mustang fighter equipped to tow airborne drogues for the Lincoln air gunners to shoot at.

When the CO of the Lincoln squadron saw that I had flown Mustangs, he was delighted because he needed a Mustang pilot to tow the drogues. I thought at the time, “who cares that I wasn’t up to the required standard to be a fighter pilot?” I now had the best of both worlds: flying a heavy bomber one day and the Mustang fighter the next.

Ice, turbulence and oil – oh my!

Friday Photo: Grand Canyon from a Cherokee
Scroll to top