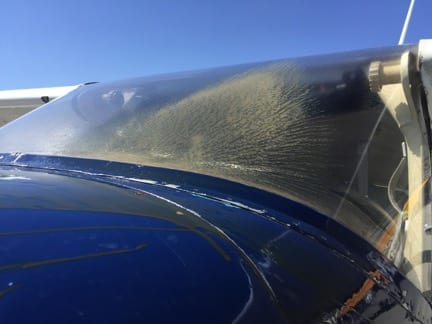 It was a rough flight. One of those flights where you think to yourself, I should have taken up boating. It started as a routine mountain departure. Typical go now in the 30-minute window between snow, sunshine, and the rapidly approaching rain clouds. After clearing mountainous terrain, I picked up my instrument clearance and looked at the broken cumulus build ups in front of me. Be a good chance to use my new Avidyne IFD440 in some real IFR I thought. And then the fun began…

“41F direct Deway, rest of route unchanged.” Great! A vector direct through the big cumulus build up; what could go wrong? I wasn’t real surprised when the moderate turbulence started but the 1000 fpm downdrafts were kind of exciting. I was certainly happy to be alone in my C206 with the extra climb capability, even at 12,000 feet.

“41F we have a change to your clearance, advise ready to copy.” Don’t they know I am busy? “Go ahead…” I mumbled while tightening my harness to keep me in the seat. I’ll say this: in moderate turbulence every touchscreen GPS is totally useless. I was really grateful the Avidyne can do every function with the included buttons and knobs; I got the changes in pretty quickly.

About five minutes later, I noticed some light rime ice and immediately told SoCal Approach I needed a lower altitude.

“41F if I give you a lower altitude, we need to change your clearance again.”

“Whatever, it takes. I need to get out of the ice.” Got a southbound vector with a descent to 8,000. I also got to enjoy the bumps getting worse and a ground track 30 degrees different from my heading in the wind.

Twenty minutes later, after yet another change to my clearance, I was thinking I would be glad to land, when I noticed that the last of the thawing ice was turning yellow on the windshield. It smeared and became more of a brown color. Just what I needed. The oil was very slowly coming down the cowling and covering the left side of the windshield. The right side was clear, oil pressure and temp were fine. When I leaned over to the right, I could see a thin line coming from the front of the cowling and onto the windshield.

I was already being vectored for the ILS and made the decision to continue into Long Beach. It was easier and safer to stay stabilized than go into a less familiar airport with smaller runways. I couldn’t see clearly in front and would need to go where I had the most experience. As I was preparing to land semi-blind, my overworked brain decided to kick in a little last-minute advice.

“Dude, you’re a flight instructor… just move to the right seat where you can see!” Wow, look at the big brain on Gary… Duh…

I moved to the right seat, got my seat belt on and shot the ILS. Besides reaching over to the left to use the push to talk, it was not bad for a 15-knot crosswind landing. After landing, I opened up the cowling to find the oil filler cap had come undone in the turbulence and in 1.2 of fairly rough air only lost about 1/2 quart, which made a mess but didn’t hurt the plane.

P.S.: It was still better than driving in LA rush hour traffic.

What brilliant ideas have you used to overcome a challenge in flight? Let us know in the comments and, as always, fly safe!

Seeing and flying: how good is good enough?