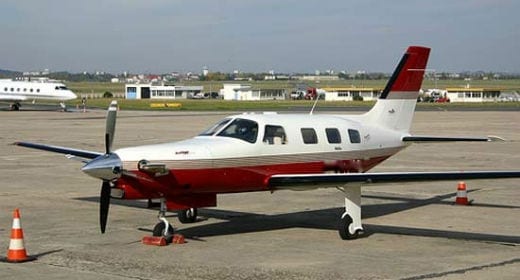 The phrase is so overused that it’s become a cliche: aviate, navigate, communicate. The clear suggestion is that flying the airplane is much more important than messing with the GPS or telling Air Traffic Control about your problems. But while all pilots hear this advice from day one of flight training, the accident record shows that it’s hard to do when something goes wrong.

The JetProp Malibu is a high performance airplane, and demands the pilot’s full attention.

That “something” doesn’t have to be a serious emergency, as a 2003 fatal accident shows. In this case, a relatively minor abnormality quickly became a disaster because the pilot seemingly didn’t maintain his focus on flying the airplane. The Piper Malibu, which had been modified to include a turboprop engine (a JetProp conversion), departed the Hilton Head Airport in South Carolina, but crashed after attempting to return for a precautionary landing.

Two pilots were at the airport and saw the accident sequence, which means the eyewitness accounts may be a little more trustworthy than usual. The first witness reported that the pilot and his passenger arrived at the airport and loaded up without doing a preflight inspection (the FBO had fueled the airplane prior to their arrival). Both witnesses reported a normal takeoff and initial climb, but soon a “vapor trail or smoke” was seen coming from the left wing. The pilot reported on CTAF that he was returning to the airport and mentioned something about a “cover off.”

Witnesses reported that the airplane was flying erratically, at one point descending very low over the trees on downwind, then climbing again. The pilot’s wife could be heard on the radio as well, and the overall scene appeared to be one of great confusion and stress. As the airplane turned from base to final, the airplane banked very steeply then pitched up. The result was predictable and tragic: the JetProp crashed and killed both occupants.

Examination of the wreckage found no issues with the engine, propeller or flight controls. The left inboard fuel cap, however, was not found at the accident scene. A ground search eventually located the fuel cap in the grass next to runway 21. While the NTSB report goes into detail about the type of fuel cap and whether the FBO employee remembers tightening it, it doesn’t matter too much. The cap most likely departed on takeoff and the white trail from the left wing was fuel venting overboard.

It’s great to check the fuel quantity, but make sure the cap is on before you start up.

That may have started the accident chain, but it hardly caused the crash. The venting fuel would have been a distraction, but the airplane was fully controllable and the weather was excellent. There’s virtually no chance the plane actually ran out of fuel, since the right wing cap was on and the engine was turning at impact.

The NTSB concluded the accident was caused by “The pilot’s failure to maintain control of the airplane during a VFR pattern for a precautionary landing, which resulted in an uncontrolled descent and subsequent collision with terrain.”

How could such a minor problem turn fatal? The private pilot was reasonably experienced, with just over 2500 hours total time and 186 hours in the JetProp. It’s hard to know for sure, but this doesn’t sound like a case of a pilot whose bank account was ahead of his experience. Weather was not a factor, either.

The most likely scenario is familiar and depressing. The pilot was so concerned about the missing fuel cap that he lost his focus. Aviate, navigate, communicate became: troubleshoot, communicate, aviate. That loss of focus spelled disaster.

Beyond the basic lesson, though, there are two other points to consider: single pilot emergencies and the role of spouses.

There’s no doubt that an airplane like the JetProp Malibu can be flown safely by a single pilot, and it’s done every day in airplanes from Cirrus SR22s to Citation Jets. But when something goes wrong in a high performance airplane, the lack of a co-pilot – even just to read the checklist or work the radio – can put the pilot a step behind. That doesn’t have to be fatal, but it certainly demands good training and quick attention. The margins are simply lower.

In place of a fully-rated pilot, many of us fly with our spouses in the right seat. This can be a fun and rewarding experience, but we also have to be realistic about it. A panicked non-pilot can be a hindrance, not a help, in situations like this. A good start is to have a frank discussion about your own flying procedures and crew resource management, on the ground before an emergency happens. Talk about what you’ll do and what you expect from your right seat companion. Beyond that, a disciplined pilot has to be able to block everything else out – to the point of being rude – when the chips are down.

In other words, when something goes wrong, “fly the f*&^%$# airplane!”

What it takes to be one sharp pilot, part two: intelligence