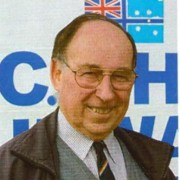 It would be difficult to describe an aviation career more colorful and varied than that of Captain John Laming. His first job in aviation was in 1948 as a “general dogsbody” (that’s British slang for someone who does menial work) for Sydney Morning Herald Flying Services. One of his jobs back then was to throw newspapers out of Lockheed Hudsons and DC-3s as part of a newspaper delivery route throughout New South Wales, Australia. He began a distinguished career in the Royal Australian Air Force (RAAF) in 1951 where he flew a wide variety of airplanes including the Mustang, Vampire, Lincoln, Convair, Viscount, Dakota, and HS748. In addition, he spent some time as a flight instructor and accumulated time in Wirraways, Winjeels and Tiger Moths. His wide experience also led to a stint as an aircraft accident investigator. After 18 years in the RAAF, he worked in Melbourne as an Airways Surveyor, and later flew DC-3s and F.27s performing airways calibration duties. In 1976, Captain Laming was hired by Air Nauru, flying F.28s and later 737-200s on routes throughout the South Pacific. His next move was to England in 1989 where he flew 737s for Paramount Airways, covering European and Middle Eastern routes. He continued flying until 1992 when he had to retire due to the “age 60” rule. He returned to Australia where he kept flying as a flight instructor and charter pilot.

It was the inaugural flight of a new service and the commercial pressure to make a success of that first flight must have been on Doug’s mind. In the event, it was later found he had been scud running though the hills of the Barrington Tops range near Dungog, NSW, en route Sydney to Taree. The terrain was dangerous and covered in mist and rain.

The very design of flight director systems concentrates all information into two needles (or V-bar) and in order to get those needles centered over the little square box, it needs intense concentration by the pilot. Normal instrument flight scan technique is degraded or disappears with the pilot sometimes oblivious to the other instruments because of the need to focus exclusively on the FD needles.

AS FIGHTER PILOT. NOT REQUIRED STANDARD.

Sixty four years after that assessment was penned into my pilot’s log book by the CFI of No. 2 Operational Training Unit at RAAF Base Williamtown, I still have a twinge of shame and regret.

Forcing myself to stay calm, I faced the embarrassing possibility that a wheels-up landing might be the only way out. I was angry with myself for being such an idiot because failure to secure the freight was not only a clear breach of the regulations, but worse still, an example of poor airmanship. I vowed that never again would I be pressured into potentially dangerous situations by fears of job security.

There will be few pilots, professional or amateur, who will not remember the good instructors with whom they have flown. Conversely, those instructors who have denigrated your best efforts and in doing so destroyed your self confidence, are invariably remembered with a cold contempt usually reserved for one’s worst enemy.

Former airline captain John Laming spent a career flying between tiny islands in the South Pacific. In this enchanting story, Laming takes us along for one of those flights, complete with the weather deviations, failing airport infrastructure and sleeping tower controllers. Were these the good old days?

This story starts at the picturesque port of Madang on the northern coast of New Guinea. I was flying an RAAF Hawker Siddeley HS748 on a two week tour around New Britain and New Ireland, culminating with the training of a new squadron pilot in the finer points of Highland operations in central Papua.

In the airline industry it is usually the cabin crew who come face to face with the loud mouths, the drunks, the ungrateful, and sometimes the dangerous. One written complaint and invariably the flight attendant will find his or her job on the line. Occasionally a nasty passenger will get just deserts.

It would be difficult to describe an aviation career more colorful and varied than that of Captain John Laming. In our latest interview, we ask the experienced military and airline pilot about everything from the Battle of Britain to modern simulator training.

Former RAAF pilot John Laming remembers one of his first flight instructors, a unique and thoughtful man he would encounter many times throughout his career. Reconnecting after 40 years, the two pilots made a memorable final flight that shows the special bond two pilots share.

In this current era of over-regulation, it may seem, understandably to anyone reading this story now, that we were a bunch of over-enthusiastic young men with little sense of professional responsibility. But it was another time and things were different then. For this ancient airman, they were the good old days and I mourn their passing.

Back in 1976 when I joined my first airline it was still customary for the captain to talk to the SLC (Self Loading Cargo – a somewhat snide description observed on pilot internet websites to denote passengers). Some of the people and the stories “down the back” are unforgettable, even 30 years later.

In between sunning myself at Bondi and flying the Wirraway, I spent idle moments in the cockpit of a Mustang reading the Pilot’s Notes and savouring the heady aroma of high octane fuel, glycol coolant and hydraulic oil. It was no contest. The Mustangs won every time.

While browsing through the records of student pilots at a local flying school, I noticed that many had not gone solo until after 15 hours of dual instruction. Some were up to 25 hours before being sent off alone. Fifty years ago, students flying Tiger Moths were solo between 6 and 10 hours.

By now we had lost several thousands of feet as expected, after starting off at 8000 feet. There was no answer from the front seat so I attempted to take control, only to find the controls jammed in the pro-spin positions.

Do you really need a massive checklist to fly a single pilot Seminole or Duchess? From the time a student first steps into an aircraft, he should not have to rely on a checklist as a crutch. Checklists are indeed a Good Thing in the big jets, but I sometimes wonder are they really necessary in light aircraft?

While flying 737s in and around the South Pacific, Captain John Laming often witnessed the local youth racing a 737 down the runway on their Honda Goldwing motorcycles. Read about this incredible tradition.

A self-described “comedy of errors” causes a captain to misdiagnose an in-flight problem and put his 737 into a steep dive at night over the South Pacific. In hindsight, this rapid descent turned out to be unnecessary. See why.

In late 1952, the sole Royal Australian Air Force contribution to the defence of Darwin was two Wirraways, a Lincoln bomber and a Dakota. A few weeks before my first arrival at Darwin, one of the Lincoln pilots, Warrant Officer Jack Turnbull, a former Spitfire pilot, wrote off a Wirraway in a crosswind landing. The Wirraway was tricky to land in crosswinds and Jack had lost control and ground-looped seconds after touch down. He exited stage left quickly as it caught on fire.