Blog - Latest News
You are here: Home1 / Article Archive2 / I was there3 / A second officer’s tale 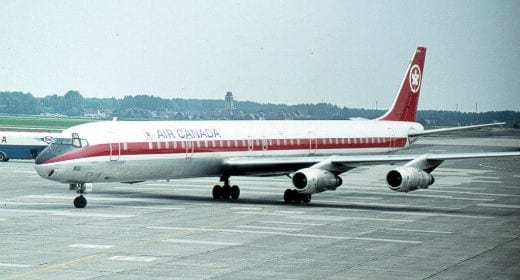 Back in the day when props were changing to jets, the Canadian Ministry of Transport – in collusion with Air Canada and in an effort to save training costs for the airline while nipping a lawsuit in the bud from the pilot’s union – contemplated creating a newly required third crew position on the huge DC-8s coming on line. The Douglas Aircraft Company had designed the airplane to operate with a flight engineer, and was operated that way in the United States as well as practically every other country. The change in Canadian regulations would mean that the third pilot crew member would be neither a fully endorsed DC-8 pilot nor a fully endorsed DC-8 flight engineer. Instead, a bastardized (or to put it more kindly, a hybridized) addition to the cockpit hierarchy was conveniently created.

The DC-8 didn’t need a Second Officer, but Air Canada decided to hire one anyway.

The person occupying the third sideways facing seat would be a licensed pilot but only partially trained and as such his pilot license would not be endorsed to operate a DC-8. It meant that this hybrid pilot would only be allowed to handle the flight controls legally above 10,000 feet on the climb and would have to relinquish the controls on descent at 10,000 feet… “ten to ten” as it was then called. This pilot was not allowed to either take off or land the airplane and further even the ten to ten was at the combined discretion of the Captain and First Officer. This hybrid would also be unable to log flying hours to his pilot curriculum vitae towards attaining a higher class of license. The bastard was a Second Officer.

Some of the junior DC-8 Captains and First Officers more imbued by the spirit of aviation writer Ernest K. Gann’s band of brother aviators than others (who chose to spit in the face of these ill-conceived regulations) did allow some Second Officers to land and take off the lumbering hulks. The company must have been vexed by some senior second officers who seemed to be forgoing the overseas trips to which they were entitled with higher pay to fly with junior captains domestically for less money. For really junior people like me it didn’t make any difference… I was on flat pay.

I remember my first trip as a Second Officer with Ralph Leek. I wasn’t looking forward to it. He had a reputation with the Second Officers as a cigar chomping, gruff bully with an abusive manner. I had been drafted, as we all had been, on a crappy, freezing rain day in November 1965 to go to Kingston, Jamaica and back. I can’t remember who the First Officer was. Anyway, it was Ralph’s birthday and I rightfully assumed he would be in a bad mood. He grumped about it all the way to Kingston.

On the ground, after I monitored the refueling, I thought I’d go inside the terminal and since I’d never been there before, buy a small, chintzy souvenir to take home. While I was there, I spotted some cigars so I thought, what the heck. As a Second Officer with a wife and three kids, I didn’t have much spare cash, but I’ll buy the boss a cigar for his birthday and try to cheer him up.

When we were all seated in the cockpit, I wished Ralph happy birthday and handed him the cigar. It was a pretty cheap one but he graciously accepted my small gift and after punching the First Officer playfully in the left shoulder, I was happy to be out of punching range, and he bestowed upon the First Officer and me a great big smile.

Climbing out of 10,000 he yelled, “Come on up here, young fella and let’s see if you can fly this thing.”  I guess the First Officer had flown with him before because without question he gave up his seat and off I went.

That’s a lot of levers for a “bastardized” pilot.

I hand flew that big DC-8 all the way back to Toronto at 33,000 feet, never relinquishing  control to the autopilot even for a moment. I was in my glory. Then we started down. The freezing rain had stopped and turned to straight rain with a slight cross wind. Approaching 10,000 feet, I started to get antsy.

I thought, “I guess I better get ready to get out of the seat.”

Ralph must have sensed my fussing anxiety. He leaned over and growled in his gravelly voice, “You stay put, young fella.”

I don’t think once during the flight I had looked back to see what the First Officer was doing in my seat. I was too busy having fun so I didn’t look at him now but, in retrospect, I think there was a conspiracy – no an understanding – between him and Ralph. It’s hard to define that kind of relationship where two pilots without saying a word completely understand each other’s thoughts. There was no need for Ralph to discuss with the First Officer that he was going to let me land the DC-8 nor seek a consensus from him for that decision. I didn’t understand it then but it became clear to me later that the First Officer had complete faith in Ralph’s judgement. It didn’t dawn on me until Ralph called for the in range check that I was actually going to land the thing. Anyway I landed it. Not a bad landing I must say and, during the whole episode, gone was Ralph’s gruff hazing as he calmly coached me through it.

It’s funny: once we were on the ground and taxiing in, Ralph reverted seamlessly to his contrived blustering banter as he boomed at the First Officer and me, “Okay you bone heads…let’s play musical chairs.”

That was the day Ralph became my new BFF (Best Friend Forever).

Some people are like badly-wrapped Christmas presents that give no inkling of the gem that might be hidden inside.

Treat the airplane like it’s yours, even when it isn’t
Scroll to top