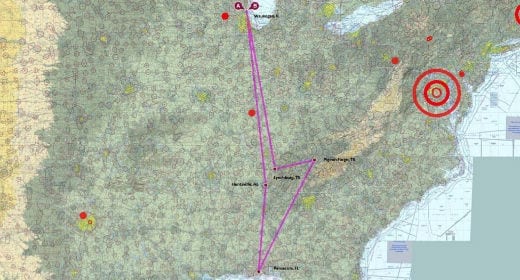 An ambitious agenda, but a whole lot of fun with an airplane.

Editor’s note: We recently asked Air Facts readers to share their own flying adventures, whether big or small. Here, Frank Ladonne launches the series with his account of a memorable flying vacation. To share your adventure, email us: [email protected]

Well, this will likely be our last opportunity to see the some of the high points of sightseeing that are a convenient flying distance from Chicago. So, we each made our list of “must sees” and what emerged was this eclectic list:

For those who are still with us, Saturday morning at 5:00am, we launched from Waukegan, Illinois and flew south past the Chicago skyline just as the sun was rising in the East.

There was an even more remarkable and rare sight than the glorious sunrise over Chicago; Jolene smiling at 5:00 in the morning!

The Chicago skyline on a beautiful morning.

By 9:30, we were on the ground at Tullahoma airport, being marshalled into our parking spot on the ramp and our rental car was driving up to meet us. By 10:00 we were driving to Lynchburg, home of Jack Daniels. For those of you who know me well, you’ll of course know that I’ve been doing my best to support the residents of Lynchburg for the past 35 years through the purchase of their product. (It’s just not in my heart to see poor Tennesseans starve).

So, we drove from Tullahoma to Lynchburg to see where this elixir is produced. Jack Daniels started his distillery in 1875 at the age of 25 years old. His product was, and continues to be, very popular and in 2013, they shipped over 11 million cases (apparently there are other good hearted folks who can’t bear to see Tennesseans starve).

Jack Daniels himself died at the age of 61. His demise started about five years before. He came to work one morning and tried to open the safe in his office (he had trouble remembering the combination). After several tries, in frustration, he kicked the safe. This resulted in a badly bruised toe which, in turn led to an infection. Over the next several years, the infection spread leading to the loss of the toe, the shin, the leg and eventually his death in 1911. Our tour guide cheerfully showed us the safe.

Lynchburg itself is somewhat underwhelming. It consists of a very nice town square formed of buildings selling virtually anything you might care to imagine emblazoned with the Jack Daniel’s logo. (We took home our fair share; remember, if not for us and our boundless charity, those poor starving Tennesseans.)

The next morning, we returned to the airport and flew to Knoxville where again we were marshalled into our spot and our rental car drove up to meet us. After a brief respite (I’ve been all the way to the back of our plane and have yet to find the rest room), we drove to Pigeon Forge, Tennessee, home of Dollywood–Tennessee’s answer to Disney World.

Now, before the inevitable snickers start, let me just say, I admire Dolly Parton (and no, not for why you think)! I have found that for any of us who live long enough, a legend begins to develop about us. Like all legends, it is always based in some truth. Like most legends, generally the legend takes on a life of its own and is much grander and much more interesting than the truth. Many of us begin to embrace or just tolerate the legend without bothering to correct because, as Theodore Geisel once so eloquently put it, “Those who mind don’t matter and those who matter don’t mind.” To paraphrase, those who believe the legend don’t matter and those who know the truth don’t pay any mind to the legend.

A famous coat, and a song to go with it…

So it is with Dolly. She has embraced the legend that has surrounded her, having once famously proclaimed, “It takes a lot of money to look this cheap.” The truth, while not as grand or interesting is that she is a wholesome, down to earth person who never ever forgot her roots. She is a person of character, integrity and morals and this comes through in her museum.

One of the most touching and defining stories is told in her song “Coat of Many Colors.” It tells the story of when Dolly was a little girl and getting ready to first go to school. Her family was so poor that she had no coat to wear. A friend gave them a pile of cloth scraps that her mother began to sew into a coat. As she sewed, her mother told Dolly the story of Joseph and his coat of many colors, from the Bible. Dolly wore that coat to her first day of school and all of the other children began to laugh and make fun of her. As she tells it:

And oh I couldn’t understand it, for I felt I was rich

One is only poor, only if they choose to be

Now I know we had no money, but I was rich as I could be

In my coat of many colors my momma made for me

And THAT’S who Dolly Parton really is.

Dollywood is a wonderful place. Go, if you get the chance.

The Biltmore, a great flying destination in Asheville, NC.

The next morning we drove to Asheville, North Carolina (wasn’t far enough to make sense flying). Asheville is known for Biltmore mansion and gardens. Biltmore was built by George Vanderbilt, grandson of Cornelius Vanderbilt. Now being from the East Coast, we have toured many Vanderbilt estates: Newport, Rhode Island; Hyde Park New York; Centerport, New York. The house in Asheville is the largest and grandest of them all. Built between 1889 and 1895 it is the largest privately owned house in the United States, at 178,926 square feet of floor space and featuring 250 rooms. It took us virtually the entire day to tour the house and gardens.

The next morning we drove back to the airport and flew to Pensacola, Florida, home of the Blue Angels and the National Museum of Naval Aviation.

Now, if you’ve been paying attention, you’ll have noted that each place where we land, we are met by a line person holding two orange batons and guiding us into a spot to park our plane and then another line person drives our rental car up to the plane so we can unload our luggage.

Upon landing at Pensacola International, I was pleased (pleased doesn’t begin to do it justice) to see that our “line person” was a perky blond young lady dressed in a pair of “Daisy Dukes” and a snug tee shirt PROUDLY proclaiming her association with Pensacola Aviation. At the risk of TMI, what was going through my mind were two thoughts:

(I’d post a picture of the line person but “my co-pilot” had some issue with taking the picture.)

The Naval Museum of Naval Aviation is not to be missed.

The museum was amazing. There is literally every plane the Navy has ever flown, many cockpits to sit in, and many full motion flight simulators (been there, done that, and been sick the rest of the day). I think if I could afford to buy the fuel, an F-4 Phantom just might be my next vehicle. Jolene picked out her own. Perhaps we could have “his and hers” or would that be TOO decadent?

The next morning, we flew to Huntsville, Alabama. (I thought of bringing my own line person but, alas, the co-pilot objected.)

As you’re driving from the airport along the expressway wondering where the US Space and Rocket Center is, you soon see a replica of the massive, 363-foot tall Saturn V rocket. Question answered.

The next morning, as we pulled into the airport parking lot to leave for home, we passed a T38 on the ramp. I happened to run into the pilot in the men’s room and I commented, “Pretty cool plane you have.” His response was priceless: “Actually, it’s not my plane but I sure do appreciate your paying your taxes and letting me fly it.”

We launched back for Chicago and ran into the first clouds we saw all week long. Coming up from mid-Indiana on, we were in and out of some tall cumulus clouds. Not a bad ride and very impressive views.