Blog - Latest News
You are here: Home1 / Article Archive2 / I was there3 / Don’t take anything for granted! 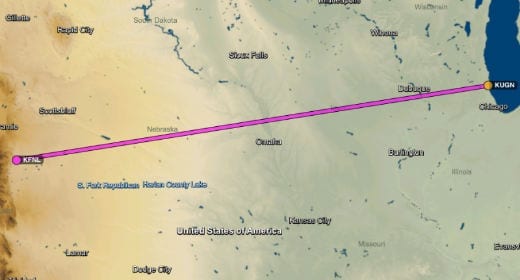 Well, we finally made it.

About 8 years ago, we discovered Fort Collins, Colorado, and decided this was where we’d spend our “golden years.” (I won’t inundate you with why Fort Collins, Colorado is absolutely the best place in the entire world to live; you’d only drive up the real estate prices.) Since then, we’ve returned every 2 years to sightsee, house hunt and generally soak up the ambience. Since I began taking flying lessons, about 5 years ago, our dream was to fly to Fort Collins. I mean, after endlessly flying over the featureless flatlands of the Midwest, how cool to see the freakin’ Rocky Mountains filling your windshield!

Quite a trip in a Cessna, but worth it.

Let me backtrack a little. When I was about 17 years old, a good friend of mine got his pilot’s license and took me flying. From that moment on, I knew this was something I wanted to do. Then, as they say, life intervened. I got married, we had a beautiful daughter that kept us (and our wallet) 120% occupied for the next 21 years. I never, however lost the dream. Finally, with Michelle in her senior year of college and having paid the last of the $50,000 tuition payments, I was beginning to see the light at the end of the tunnel. I casually, over dinner one night, broached the subject of taking flying lessons. My innocent overture was met with a shriek of “ARE YOU CRAZY; YOU’RE GONNA DIE???”

Well, as any of you who are married know, Rome wasn’t built in a day. Over the next few months, like water dripping on a rock, I kept idly bringing flying into the conversation. Eventually, Jolene succumbed to the idea. I did my homework and decided to take lessons at the Stick and Rudder Flying Club, the oldest continuously operating flying club in the US. The club is peopled largely by a collection of older gentlemen (yes, even older than me) who variously “hangar fly,” enthrall others with tales of flying adventures past, criticize the flying of others, perhaps share a beverage or two while shooting the breeze and fly about 25 miles for breakfast on Sunday and then back again. I took my lessons from easily the crotchetiest of the denizens (but also a consummate airman and the club’s Chief Pilot).

“The only time you can have too much fuel is if you’re on fire.”

”You know why the birds sit on the taxiway centerline? Because they know you won’t hit them.”

And the frequent: “Okay, in spite of everything else that’s happened during this lesson, let’s at least see if we can make a good landing.”

I LOVED this guy, and still do.

Finally, on October 1, 2008, I took my checkride; the last step to becoming a pilot. Up until this point, neither Jolene nor I knew whether she would like flying at all but to her great credit and my everlasting gratitude, she put up with my dream, for no other reason than – it was my dream. I passed! As soon as the FAA examiner completed filling out the reams of paperwork, she suggested, “Now that you’re a pilot, why don’t you take your wife for a ride?”

Well, the two of us got in the Cessna 152 two-seat trainer; small enough that it was more like putting on a plane than getting in a plane. I got my clearance, lined up on the runway and took off. It was a few minutes of being busy before I could glance over and when I did, I saw the biggest smile I have ever seen. That smile, by the way, is repeated every single time we have taken off since. She LOVED it and still does. I was so happy that I wasn’t destined to become one of the hangar rats – Jolene and I would see the world together – and boy, have we ever!

In 2010, we bought our own plane and shortly after named it Volare! Some of you older folks will remember the 1958 Domenico Modugno song. Well, for your further edification, Volare, in Italian means, “To Fly.” With the addition of the exclamation point for exuberance, the name reflects our love of flying and our Italian heritage all at the same time.

Together, Jolene and I have gone on 115 flights and spent 359.6 hours together in the cockpit while covering just shy of 48,000 miles together. All along however, our goal was to fly to Fort Collins, Colorado. A few years ago, I was tracking the weather for two weeks in advance and it looked good. Two days before our scheduled departure, a hurricane developed off the coast of Florida. The next day, there was a line of thunderstorms stretching from the Gulf of Mexico to the Canadian border in a line between us and Colorado. The next morning we drove, 1,009 miles for 17 hours.

A few years later, finally, we made it! We launched on Friday night, instead of the planned Saturday morning, to beat predicted crappy weather in Chicago, spawned by the remnants of hurricane Isaac. Friday night, we landed in Omaha, Nebraska, our half way point, and stayed overnight. The next morning, we launched into cloudless blue skies for Colorado. For the next three hours, the flight was flawless; smooth and clear, we listened to oldies on the iPod and the occasional exchange with air traffic control.

Before long, our endless view of the brown dirt and rocks that characterize Nebraska, we were rewarded with this view (see picture at right).

The Rocky Mountains! We had finally made it (or nearly so). Jolene’s smile was so wide I thought her face would crack.

A few moments after this picture was taken and about a half hour from our destination, we began to hear a buzz in our headsets. Hmm, I thought. I few moments after that, I noticed our low voltage warning light blinking in cadence to the flashing of the wing tip strobe lights. Alternator! I shut off the strobes to conserve power and announced to Jolene that our alternator seemed to be failing. I reassured her that since the engine was powered by magnetos and didn’t need power from the battery or alternator to run, we could continue safely flying but likely we’d need to continue to shed load to preserve power for the radio for as long as possible but, if necessary, we could even land without use of the radio.

We motored on with much of the exuberance and excitement gone but with all of our experience together however, Jolene was the consummate professional. You see, Jolene isn’t just a passenger, she checks and reminds and navigates and is everything you’d want a copilot to be: a professional.

We landed uneventfully and taxied Volare! over to the FBO. Keep in mind, this was Labor Day weekend. Purely by the grace of God, we found a mechanic (Terry) on duty Saturday morning at Fort Collins airport. By that afternoon, he had diagnosed the problem and its cause. Since Saturday through Monday businesses were closed, he ordered and overnighted the parts on Tuesday morning and by 1 PM on Wednesday, we were flying back home.

Mechanically operating an airplane is pretty easy. I could show someone how to do it in about 2 hours. What isn’t so easy is all the other “stuff” you need to know: navigation, communication, weather forecasting and the all-important “What do you do if…”

When you take flying lessons, about every third lesson or so, when you least suspect it, your instructor will pull the throttle and as the propeller quickly begins windmilling in the silence, the instructors asks, “Okay, what do you do now?” Thus, a good pilot is constantly scanning his instruments and the terrain and thinking, “What will I do if…” The “if” can be virtually anything. An engine quitting is really, really rare but planes are mechanical and “stuff” happens. My instructor also used to say, “Any flight that you go on where you haven’t learned something, you weren’t paying attention.”

So, what did I learn from this flight? Did I learn that alternators can fail? Nah, I already knew that. Did I learn that I can handle an unexpected problem in flight? No, because I’ve had a few unexpected experiences and due to the exemplary training I received and in part due to 700+ hours of piloting, when something does happen, you just automatically do what you’ve been trained to do.

What I learned was, as suggested by the title, “Don’t take anything for granted.” By this, do I mean the alternator? Hardly, I’m an Electrical Engineer. I know full well that alternators fail.

No, the lesson I learned was, don’t ever take for granted the single element that has given all of my flying so much fun and enjoyment and never fails to keep me smiling. What I learned is, don’t take your copilot (in flying and in life) for granted.

From the archives: Dick Collins on airline vs. GA flying

Why I bought a Pig!
Scroll to top